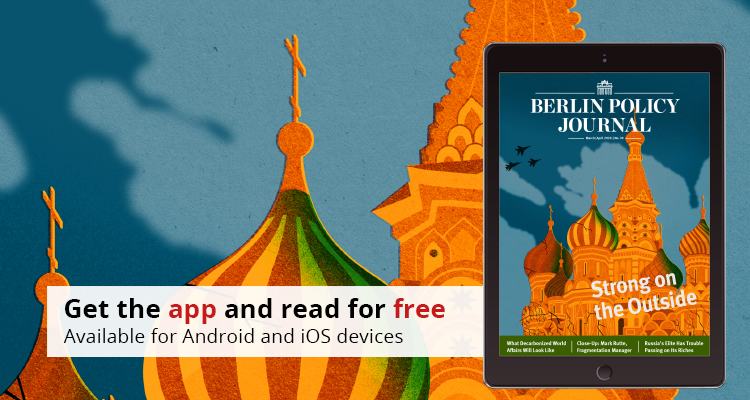 Exposure to China: A Reality Check

Strong on the Outside

We Need a Small War

Russia’s newfound strength may prove to be an illusion.

The wealthy Russian elite will struggle to pass on their riches and status to the next generation.

Europe needs to do more to protect itself against the Kremlin’s constant hybrid war.

Paris is pushing Berlin to rethink its approach to Russia.

The Dutch prime minister has been supremely skilled in navigating fractured politics. Does a Brussels job beckon?

The decline of fossil fuels will fundamentally reshape geopolitics.

Who Will Save the CDU?

In search of its identity, Angela Merkel’s party faces a stark choice between continuity and rupture.

Brussels has to develop a new form of partnership with the United Kingdom.

There is only one way for Europe to set up a Security Council.

Europe can stop America turning away from the old continent.

END OF THE NEW SILK ROAD

There’s a world of difference between the hype and the reality of the Belt and Road Initiative.

Egypt Is No Anchor

Population growth and inequality are making the country fragile.

Out Now: January/February 2020 Issue – Free to Download on your Tablet and Smartphone

+++ We are now living in a world of frenemies, and Berlin is caught in the headlights, argues Jörg Lau; in an interview, US Republican senator Tom Cotton warns of Chinese and Russian attempts to split the West; Daniela Schwarzer explains that Germany and Europe need to learn the rules of geo-economics; Anja Vladisavjevic profiles Andrej Plenković, Croatia’s prime minister; Noah Gordon, in his Carbon Critical column, dissects the four camps in the new climate debate; Sebastian Heilmann warns against the Chinese conception of humanity; Michael Rühle says that academics need to up their game (“Ground Control to Ivory Tower”); and much more +++