The two candidates in the run-off vote for the Polish presidency offer very different visions of the role the country can play in the EU, with one representing the status quo and the other opening up new opportunities. 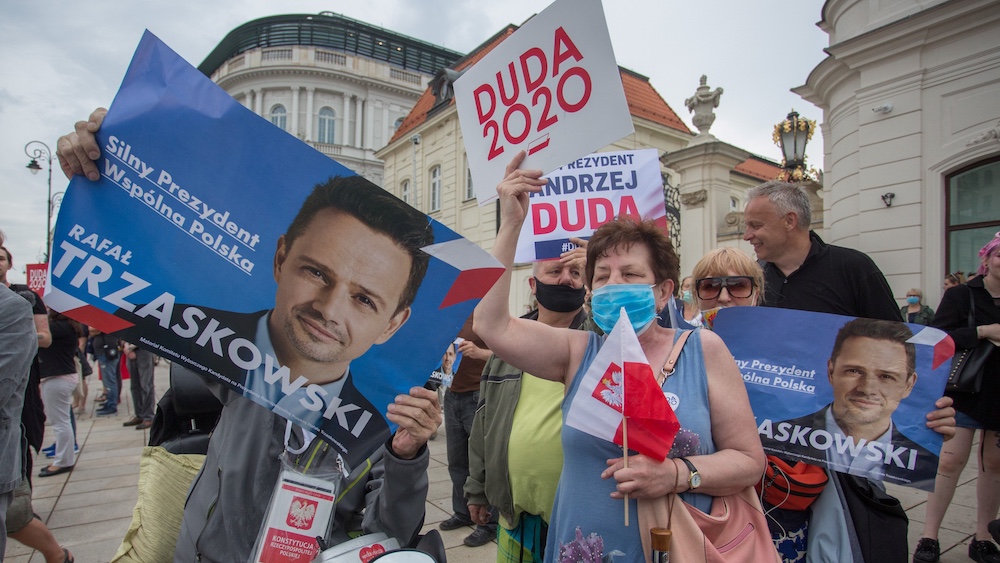 The outcome of Poland’s presidential election on July 12 will cause ripples not only in the country itself, but also in Europe. Formally, the Polish presidency is a mostly ceremonial post, though with the power to veto laws. Yet symbolically, the result of the election will shape whether Poland becomes more open or closed—and its role within the post-Brexit, coronavirus-era EU.

Since 2015, Poland has been governed by the Law and Justice (PiS) party, which combines social conservatism with a statist approach to the economy. While not opposed to Poland’s EU membership, it has adopted a more defiant attitude to the EU, similar to that of Hungary’s prime minister, Viktor Orbán. Its overhaul of the country’s judiciary, including the Supreme Court, has led to a drawn-out conflict with the European Commission, which has accused the PiS government of undermining the rule of law.

In this election, Poles will choose between Andrzej Duda, the PiS-backed president (he left the party after he was elected in 2015), and Rafał Trzaskowski, the mayor of Warsaw, who hails from the centrist Civic Platform (PO), the old party of Donald Tusk, who served as Polish prime minister before taking on the presidency of the European Council. Both of the candidates were born in 1972, have a background in academia, and served as members of the European Parliament. Politically, though, they are on opposite sides of the PO-PiS conflict that has dominated Polish politics for more than a decade.

In the first round of the election on June 28, Duda came first with 43.5 percent of the vote, followed by Trzaskowski with 30.5 percent. The rest of the vote was split between several candidates: Szymon Hołownia, a liberal Catholic who ran as an independent, with 13.9 percent, far-right national Krzysztof Bosak, with 6.8 percent, agrarian candidate Władysław Kosiniak-Kamysz with 2.4 percent, and center-left candidate Robert Biedroń. The other candidates got less than 0.3 percent. As no one candidate attracted over 50 percent of the votes, there will be a Duda-Trzaskowski runoff on July 12.

Despite the coronavirus epidemic, the health and economic situation has not figured prominently in the election campaign. Instead, Duda tried to mobilize socially conservative voters with homophobic rhetoric, calling LGBT (lesbian, gay, bisexual, and transgender) rights an “ideology” more destructive than communism. This was a direct attack on Trzaskowski, who signed an LGBT Declaration for Warsaw last year, after he was elected mayor.

Foreign policy hasn’t been much of a campaign issue, either, even though Poland’s president is the state representative in international affairs and commander-in-chief of the armed forced. At a basic level, this reflects the longstanding consensus in Polish politics, whereby Poland is firmly rooted in the EU and NATO. However, there are significant differences in emphasis between the two candidates.

A Visit to the White House

Duda has banked on relations with the United States. On June 24, four days before the first round, he made a last-minute visit to the White House to meet with President Donald Trump. Although no concrete decisions were made, the meeting was meant to show Poland’s close relationship with the US. The visit came with an apparent endorsement from Trump: “And I do believe he has an election coming up, and I do believe he’ll be very successful,” he said at the joint press conference with Duda in the Rose Garden. This raised eyebrows in Poland and beyond, with one European diplomat warning that Poland is taking a risk by being so close to such a controversial politician, who might not be re-elected later this year. Trzaskowski responded to Duda’s meeting Trump with a telephone conversation with former President Barack Obama the following week, during which they spoke about “the importance of Polish democracy within the EU and the significance of the US-Polish alliance.”

As president, Duda’s main foreign policy endeavor has been the Three Seas Initiative, a Polish-Croatian venture bringing together 12 Central European countries, including Austria, that seeks to improve cross-border energy, transport, and digital infrastructure in the region (its recent summits have been attended by representatives of the US and German governments). Although he is not against Poland’s membership in the EU, this has not stopped Duda from making disparaging statements about it. In 2018, for example, he called the EU an “imaginary community from which we don’t gain much …Of course we have the right to have expectations towards Europe—especially towards the Europe that left us to be the prey of the Russians in 1945—but above all we have the right to rule ourselves here on our own and decide what form Poland should have,” he said, speaking at an event in the town of Leżajsk, in the country’s south-east, which tends to be more pro-PiS. On another occasion, also in 2018, Duda likened EU membership to the partition of Poland, when the country was divided between Prussia, Austria, and Russia from 1795 until 1918. This kind of rhetoric reflects the wider tendency in PiS to speak of the EU in terms of “us” versus “them.”

In contrast, Trzaskowski—who served as Poland’s Europe minister from 2014 to 2015 in the PO-led government before PiS came to power—has tended to emphasize the active role Poland has to play in Europe, not least after Brexit. “We will not substitute Britain, but we can offer this young spirit, this dynamism, this openness and perspective,” he told me in an interview in Warsaw last year, in English (one of the several languages he speaks). “The partitions, the Second World War, then communism stifled the dynamism and now it’s out in the open, and that is why we crave those possibilities,” he added, explaining that Poland could channel this energy into Europe.

Asked about his first visit abroad if he is elected president during a televised Q&A with journalists on July 6, Trzaskowski said that he would first invite the French and German presidents to Warsaw, to “renew the Weimar Triangle” which consists of France, Germany and Poland.  His first visit abroad will be to Brussels, to “fight for as large a budget as possible for Poland.” The country “is truly strong when it is strong and influential in the EU,” he said, adding that he will seek to rebuild its position, after its marginalization by PiS.

With strengthening fundamental values, notably the rule of law, among the priorities of the six-month German presidency of the Council of the European Union, which began on July 1, 2020, a change in president in Warsaw would also affect the dynamics of the Polish government’s conflict with the European Commission over the courts. Trzaskowski announced this week that, as president, he would use his power of veto to block any decision by the PiS government that does further damage to Poland’s courts.

With the two candidates neck and neck in the opinion polls, Berlin, Paris, and other capitals are preparing for both scenarios. In broad terms, Duda’s re-election would mean a continuation of the status quo. Meanwhile, a Trzaskowski victory could offer new opportunities in bilateral relations and within the EU (such as strengthening the Weimar Triangle at the presidential level, as mentioned above). In the election on July 12, Poles will not only be casting a vote for the type of country they want to live in, but also its role in Europe.