Belarus’ disputed presidential elections and the violent aftermath has exposed the gradual erosion of trust among young people in the regime. 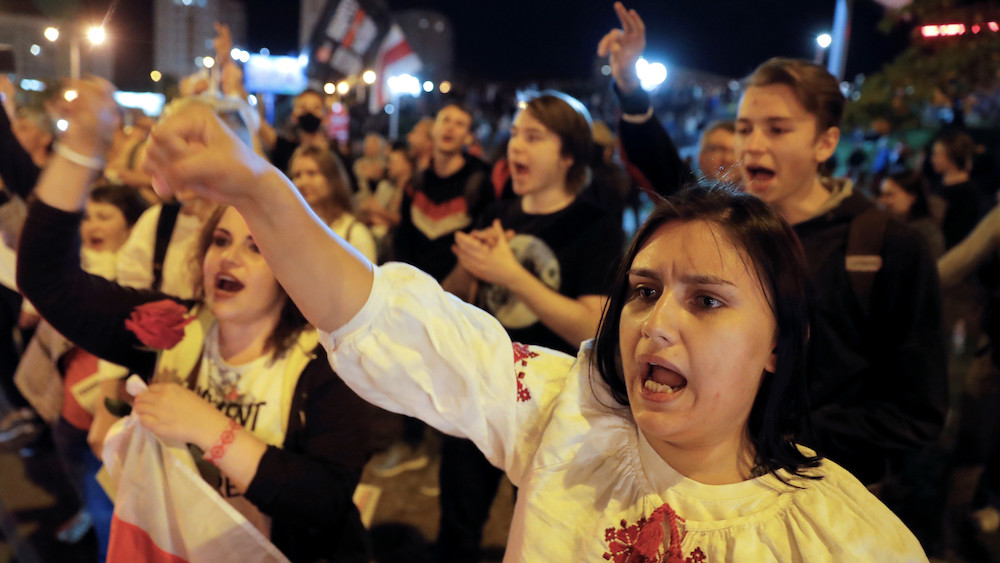 A new generation of Belarusians has clashed violently with the security forces this week in reaction to what is widely perceived as a rigged presidential election on Sunday. The incumbent, Aleksander Lukashenka, was officially declared the victor on August 14, with 80.1 percent, while the promising challenger, Svitlana Tikhanovskaya, was attributed just 10.1 percent. These results, which had been provisionally published earlier, have been vehemently disputed.

Electoral observer reports have severely criticized the electoral process, the system of early voting and the counting of votes. A survey conducted by the Berlin-based Centre for East European and International Studies (ZOiS) prior to the elections found that less than 10 percent of young Belarusians said they intended to vote for Lukashenka.

The online survey was conducted from June 22 to July 4 among 2,000 respondents aged 18-34 who live in the country’s six largest cities and offers some insights into current developments in the country. Events since the election demonstrate that the regime has severely misjudged the public support that Tikhanovskaya and her team have gathered. Protests, strikes, and solidarity chains illustrate the growing distance between the paternalist regime, entirely dependent on its power structures, and society.

Discontent has been on the rise and contradicts Belarus’ self-image as a stable welfare state caring for the well-being of its citizens in exchange for political freedoms. Russia’s generous energy subsidies have ended, real incomes have fallen and the official unemployment rate (2.3 percent) is widely perceived as fiction. Not much is left of the so-called “Belarusian model.”

The authorities’ mishandling of the COVID-19 pandemic has now added to the already growing societal grievances. Young people have been hit particularly badly by the pandemic. Nearly 40 percent of the respondents in our survey stated that their employment situation had changed due to COVID-19—some were forced into unemployment and most into part-time employment. 53 percent of the young people surveyed were in full-time employment.

Trust in key state institutions has been eroding in the first half of 2020 in the context of the pandemic. In February 2020, young people expressed on average neutral trust ratings for the president and the security forces and positive ratings for the army. These numbers had deteriorated remarkably by the summer with 75 percent of young people expressing no trust in the president and the security forces. The numbers will likely have evolved further over the six weeks since the survey was carried out. 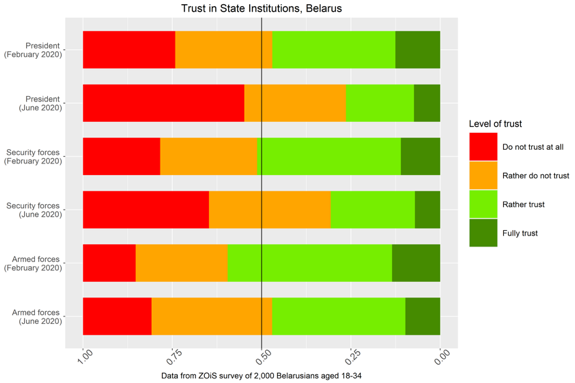 Today’s low approval rates are moreover a culmination of a gradual erosion of the relationship between youth and the establishment. In 2017, as part of the so-called parasite law, the authorities introduced a special tax for the unemployed. This triggered a wave of social protests across the country, leading to its revocation. Other measures included the tightening of a law penalizing the possession of (even light) drugs and the de facto abolition of deferments for young male conscripts to solve the armed forces’ recruitment problems.

During the electoral campaign, young people had joined the large opposition rallies early on and they have been at the forefront of the post-election protests. Usually, protest participation among young Belarusians is low, on average below 5 percent, given the dangers to personal safety. This time threats to personal well-being have not stopped people from taking to the streets and expressing their frustration about the rigged election and the system in place.

A major factor in this mobilization has been social media. The Warsaw-based telegram channel NEXTA (nearly 2 million subscribers) and the channel of the independent news portal tut.by have turned into the main conduit through which people abroad and in the country communicate by means of encrypted traffic. For long, the internet has absorbed young people’s frustration and these digital natives have now turned into keyboard warriors. However, with the periodical internet shutdowns, activism has taken to the street.

Immediately following the presidential elections, it was predominantly young people who clashed with the special police force OMON and the Belarusian internal troops. The clashes have so far led to the arrest of more than 6,000 people, 250 hospitalizations and two confirmed fatalities. Young people on the streets are not, as Lukashenka suggests, criminals and unemployed people, but instead—our data suggests—they are a diverse group, including women and men, people with different economic backgrounds and from different cities. A heightened political interest and dissatisfaction with the status quo are the factors that unite them.

The brutal crackdown by the police force against activists and ordinary citizens alike are not new. The results of previous presidential elections in 2006 and 2010 have been equally contested when security forces violently quashed protests. Belarus under Lukashenka has always been a police state—with Europe’s highest police density rate. The security apparatus has proved to be particularly reform-resistant.

There are indications that such a response has been prepared in advance to prevent domestic destabilization. Nevertheless, there have been several online testimonies by members of the security forces quitting an apparatus perceived as oppressive.

The president has up to now been able to rely on the unfailing loyalty of Belarusian elites and state employees. This loyalty is grounded in their socialization. Most of them built careers under the current president, who represents continuity. For many commentators, the election this year raised hopes that this loyalty could dwindle, since it had become clear that elites, especially in the regions, are no monolithic bloc. But whether high-rank officers will abandon their loyalty and turn against the regime remains doubtful.

Reactions by the European Union and Germany, as current holder of the EU Council presidency, to the events in Belarus have so far been muddled. There are two major hurdles to an adequate response.

First, Europe lacks a coherent Belarusian policy, because there was no need to have one. For many European policy-makers, Belarus played only a marginal role as it seemed dominated by Russia. The politicians who are now horrified by the events in Minsk and elsewhere are mostly the same ones that supported the lifting of sanctions in 2016—against the appeals of Belarusian civil society.

Second, formulating a coherent policy under current conditions is difficult given internal splits. Poland and Lithuania have been the first to condemn the elections and were joined by several other European countries and the EU. Whereas Lithuania seeks a leading position, Poland lacks credibility to advocate for human rights given its own conflicts with the EU over the rule of law. Other EU members, notably Hungary, have been less vocal, has been largely silent due to vested interests.

On the other hand, if Europe stays on the sidelines and only expresses compassion with Belarusians, this will lead to justified criticism. Not acting in such a moment of crisis is also a statement. It is important that the EU provide every support possible for the Belarusian opposition and stays engaged beyond the election period, something it has failed to do in the past.