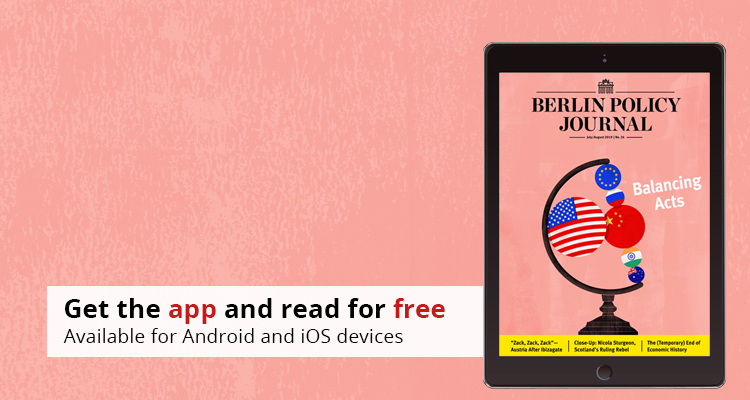 Greens Up, Reds Down

The United States must now keep a global balance of power.

The Case for a Sovereign Europe

The EU’s limits are painfully clear. It’s time for a new strategy.

The Other Asian Power

Alliance for Multilateralism–
An Australian View

With their powers steadily growing, how will European lawmakers have an impact on the lives of EU citizens?

The image of a close Putin-Xi friendship can be deceiving.

As Brexit looms, Scotland’s first minister may get another opportunity to make the case for leaving the United Kingdom.

What will happen to aviation in a world of net-zero emissions?

Another refugee crisis could be looming. Yet so far the EU has been divided and passive.

The Glass Is Half Full

Germany has had some success integrating refugees.

“Ibizagate” has shaken Austrian politics. But plus ça change…

The (Temporary) End of Economic History

The internet giants like to present themselves as foreign policy actors on equal footing with nation states. They are not.

A Highway to Nowhere

Sinohydro workers are roughing it in the Macedonian mountains.

The EU should have its own intelligence agency.