China and Russia seem to be getting ever closer, but the image of a deep Putin-Xi friendship can be deceiving. The EU should soberly assess where its interests are really affected. 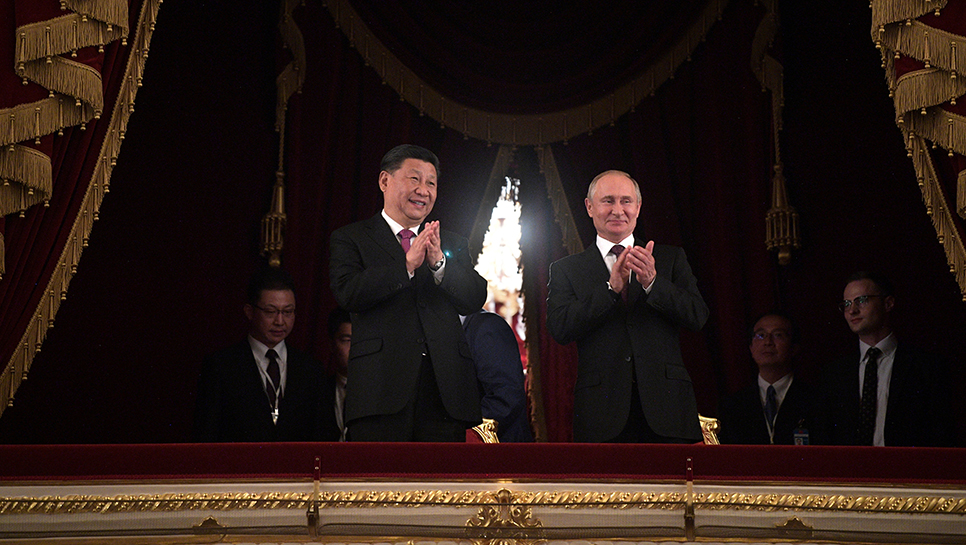 With prominent Western attendees few and far between, the stage was set at the end of June for this year’s St. Petersburg International Economic Forum to become a Russian-Chinese affair. Russia’s President Vladimir Putin took his counterpart Xi Jinping, the guest of honor, on a tour of his home city, and the two leaders talked until midnight.

Bilateral Russian-Chinese relations have reached an “unprecedented level,” Putin declared. The previous year, Xi had called Putin his “best, most intimate friend” and awarded him China’s first-ever Friendship Medal. Without a doubt, Russia and China have come a long way since the open hostility between the People’s Republic and the Soviet Union in the 1960s. Today, both countries closely cooperate in the UN Security Council, carry out regular joint military exercises, and look to each other for trade and investment.

Since Xi became China’s president in 2013, Russia-China relations have become much more personalized. The two presidents have lent each other symbolic support when it counted most. Putin was the key foreign guest at the Belt and Road Forums both in 2017 and 2019. Xi, on the other hand, was the only foreign head of state at Russia’s military parade in May 2015, when Russia, on the 70th anniversary of Victory Day, faced international isolation after the annexation of Crimea.

Although the connection between Putin and Xi often looks transactional, it facilitates the rapprochement between Russia and China. However, this high degree of personalization comes with its own risks: a change in leadership in one of the two countries could quickly change the dynamic in bilateral relations.

And while the two leaders are adept at creating the image of an inseparable Russian-Chinese friendship, their enthusiastic handshakes often do not translate into actual cooperation. It has become common practice for Russia and China to sign several dozens of bilateral agreements each time their presidents meet, but the significance of these contracts, which range from partnership agreements to business deals, to cooperation of regional governments, should not be exaggerated. More often than not, they do not have any material consequences. The businesspeople and bureaucrats involved know that the implementation of the contracts is secondary at best. They see the signing ceremonies as a valuable opportunity to get access to their respective president.

As a general rule, economic cooperation between Russia and China is successful when it aligns well with elite interests and pays for itself. Unsurprisingly, the biggest progress of the last years has been made in the natural resources sector. The largest common projects are the construction of the Yamal LNG terminal and the Power of Siberia pipeline, which will pump Russian natural gas to China starting in late 2019. Both projects have given Putin’s business allies and their contractors the opportunity to make billions of rubles.

Other bilateral initiatives are failing, however, because neither Beijing nor Moscow is willing to foot the bill. The flagship project of Russia’s cooperation with Xi’s Belt and Road Initiative, a high-speed railway connecting Moscow and Kazan, has been postponed year after year because Moscow is unwilling to grant the state guarantees that Beijing’s banks demand. Another case of unsuccessful cooperation is the attempt to de-dollarize trade between the two countries, 75.8 percent of which was still settled in US dollars in 2018.

The volume of trade, in contrast, has been a bright spot in the Russian-Chinese relationship. Trade turnover has doubled over the last ten years and reached a new record of $108 billion in 2018, despite lower oil prices. As an individual country, China is Russia’s most important trading partner. As a trading bloc, the EU still far outweighs China, with a trade turnover of $279 billion in 2018. Of course, the increase of bilateral trade has less to do with Russia’s “pivot to the East” or a Putin-Xi friendship, but is mainly the consequence of Chinese economic growth. While China’s trade with the world has ballooned, Russia’s share has remained virtually unchanged at around 2 percent.

Still, the outlook for trade in goods and services is promising: China’s demand for natural resources and food is expected to further increase, while more affluent Chinese tourists will roam Russia’s far east, Siberia, and the rest of the country. Railway transit of Chinese goods through Russia is small but growing. And thanks to its increasing technological prowess—and, to some degree, Western sanctions—China is more and more able to compete with EU exporters in the Russian market for machinery and vehicles.

While the Kremlin welcomes the uptick in trade, it also hoped that investors would drive the modernization of Russia’s economy. The progress here has been disappointing. According to Russia’s Central Bank, the stock of foreign direct investment from China and Hong Kong stood at just $3.6 billion, or 0.9 percent of Russia’s total incoming direct investment in January 2019. Pinpointing the precise amount of Chinese investments in Russia is notoriously difficult because, according to estimates, about half of the Chinese capital flows through offshore jurisdictions such as Cyprus before it enters Russia. But even if these masked transactions are taken into account, it is clear that Kazakhstan, for instance, and a range of other countries have been much more successful in attracting Chinese investors than Russia.

The main reason for the lack of Chinese investment is Russia’s generally unattractive investment environment. There are few lucrative opportunities in Russia’s stagnating economy, and Chinese businesspeople often lack the necessary experience and patience. A peculiar combination of highly regulated markets, pervasive bureaucracy, rampant corruption, and economic protectionism makes Russia less predictable for Chinese firms than some of the least developed African countries with their highly autocratic regimes.

Another complicating factor is the anti-Chinese sentiment still lingering in Russian society. A common narrative is that Chinese investors exploit the country’s sacred natural treasures with the help of unscrupulous and corrupt Russian elites. The most recent variation on this theme was the commotion around a new Chinese water bottling factory at the Lake Baikal.
After reports spread throughout Russian social media that the factory was an ecological threat, it sparked outrage not only in Siberia’s Irkutsk, but more importantly in Moscow. Eventually, the authorities suspended the Chinese project in March 2019. There are similar concerns over Chinese farmers spoiling Russian soil with inappropriate fertilizers or Chinese loggers cutting thousands of square kilometers of Siberian forests. While only some of these concerns stand up to closer scrutiny, this doesn’t change public perception:. When in doubt, the Russian authorities would rather terminate a Chinese investment project than risk public unrest.

The already staggering asymmetry in Russian-Chinese economic relations will only increase in the coming years. Still, Moscow has avoided falling into a one-sided dependency to China. At the moment, Russia can still balance the relationship with legacy advantages it possesses. Especially in the military and aerospace industries, Moscow boasts technologies that China cannot replicate or buy anywhere else. However, as China is quickly developing its own capabilities, balancing the relationship will become more difficult for Moscow.

In the past, Russia’s answer to looming dependencies has been to stall cooperation and integration processes. For example, Moscow has blocked Beijing’s initiative to create a free trade zone within the Shanghai Cooperation Organization. The asymmetry in information technology between China and Russia could also raise concerns in Moscow for the future. As a consequence, it is unlikely that Russia will create its entire 5G network solely with Huawei technology. Although a new contract between Huawei and Russia’s Megafon on 5G was prominently advertised in early June, much less attention was paid to similar agreements that Nokia and Ericsson signed in St. Petersburg.

An Analytic Challenge for the EU

China initially benefitted from the worsening relations between Russia and the West. The Kremlin was urgently looking for new partners, offering access to natural resources and military tech in return. However, Russia’s erratic and aggressive foreign policy is also a cause for concern for Beijing. While Chinese state media have harshly criticized the West over its sanctions regime and double standards, Beijing has formally adopted a neutral position on the Ukraine crisis and does not recognize Crimea as Russian territory.

So far, Beijing has given no indication that it is prepared to spoil its relations with the EU by supporting Russia’s foreign policy adventures. It avoids siding with Moscow too explicitly. When Putin gave an interview in Beijing in late 2018, Chinese censors cut out his invitation for Chinese tourists to visit Crimea. Chinese banks also take great care to not breach US sanctions, and they have closed accounts and blocked transactions of Russian businesses and citizens, leading to frustration in Moscow.

There is little the EU can do to change the trajectory of Russian-Chinese relations. However, a sober assessment will be needed to determine where Russian-Chinese cooperation is threatening to EU interests, where it is benign, and most importantly, where it is more about words than deeds. Meanwhile, EU policymakers should avoid the temptation of lumping Russia and China together. Observers in Washington are currently inclined to treat Beijing and Moscow as an anti-Western alliance in the making, which they are not. The analytical challenge for Europeans will be to not let the Putin-Xi show deceive them, while taking the more fundamental developments seriously.