Her entire political life has been centered on Scottish independence. As Brexit looms, Scotland’s first minister may have another opportunity to make the case for leaving the United Kingdom. 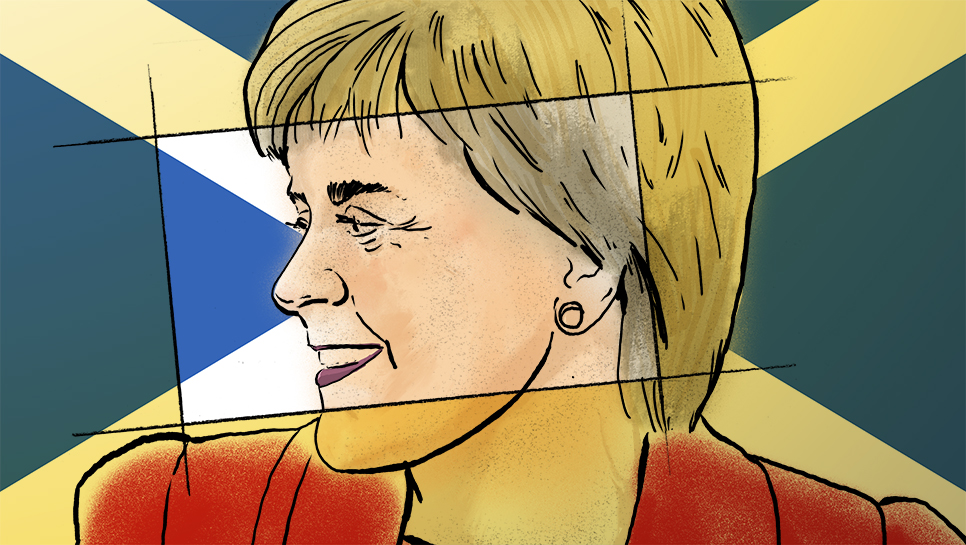 Just hours after the result of the United Kingdom’s June 2016 Brexit referendum had been confirmed, Nicola Sturgeon, Scotland’s first minister, declared that the differential result—in which Scotland voted Remain but the UK as a whole opted for Leave—meant all options were once again, as she put it, “on the table.” That included, predictably, independence for Scotland.

It has been the defining issue of Sturgeon’s life. Her politics and her being are inextricable. She joined the Scottish National Party when she was just 16 years old and first stood as a candidate for election when she was 22. She was elected to the first Scottish parliament upon its establishment in 1999 and has served in government ever since the SNP came to power in 2007. She is not yet 50—she turns 49 in July—but has been a fixture in Scottish public life for so long, she seems improbably young.

When she joined the party, activists were in the habit of celebrating opinion polls suggesting one in ten Scottish voters backed the SNP. The party, which exists to promote the cause of independence, celebrated occasional by-election victories but seemed an impossible distance from real power. Few careerists joined the SNP in the 1980s.

Thirty years later, the SNP is the dominant political power in Scotland. It has run Scotland’s devolved government for the last twelve years, and Sturgeon, having previously served as health minister and deputy to Alex Salmond, the party’s former leader, will in November celebrate the fifth anniversary of her becoming first minister. Since supplanting the Labour Party which had dominated Scottish politics for the previous half century, the SNP has become Scotland’s natural party of government: a social democratic party that recognizes few, if any, boundaries of class or geography.

Sturgeon herself is a figure with whom many Scots can identify. She is as “normal” as any leading politician is likely to be. A product of the aspirational working class, she was born in Ayrshire in 1970. Her parents were the first in her family to own their own house and she and her sister the first to attend university. Sturgeon read law at Glasgow University.

“I was quite an introverted child,” she told one interviewer, recalling that, “At my fifth birthday, I hid under the table reading a book while all the other kids played.” But she was always driven, always aware that she had “something” inside her that would commit her to a life in politics and a career of public service.

“[Margaret] Thatcher was the motivation for my entire political career,” she has said. “I hated everything she stood for. This was the genesis of my nationalism. I hated the fact she was able to do what she was doing and yet nobody I knew in my entire life had voted for her.” At a time when most politically-aware Scots her age joined Labour, Sturgeon opted for the SNP, determining that only independence could satisfy Scotland’s political and social aspirations.

A Return to the Family of Nation

At her selection as an SNP candidate in 1991, she was introduced as the lady who “will be the first female leader of the SNP one day,” a prediction which embarrassed Sturgeon at the time but proved unusually accurate. In the aftermath of the 1992 general election, Sturgeon reminded her compatriots of her party’s mission: “We will turn Scotland from the invisible nation of Europe into a nation which plays a full part in Europe and contributes to the great international issues.”

Some things in politics are constant, and this is one of them. Returning Scotland to the international “family of nations” remains Sturgeon’s ambition and the purpose of her political life. Brexit has convulsed British politics these last three years but, viewed from Scotland, it is part of a much larger question: should Scotland be an independent country or not?

When that question was asked in 2014, the answer was a clear, but hardly resounding “No”—with 55 percent of Scots opting to remain a part of the United Kingdom while 45 percent voted to leave. The issue remained unsettled, and there was, regardless of individual preference, an awareness of this being an argument only half-completed. The national question had been asked but not settled or answered in a decisive matter.

Even so, there seemed little plausible prospect of it being asked again any time soon. Sturgeon herself had argued the 2014 referendum was a “once in a generation” opportunity to strike out in a new direction. Outside events, determined elsewhere, would be required to revive the independence question.

Enter Brexit. Even if Sturgeon had wished to avoid reopening the national issue, there would have been no way of avoiding it. Even so, Sturgeon finds herself caught in a particular paradox: Brexit is a disaster for the UK, but an opportunity for Scotland. Leaving the EU—especially, as seems increasingly plausible, without an agreement that would pave the way for an orderly transition period—risks all but incalculable damage to the UK, and the Scottish, economy. It is, Sturgeon believes, an act of self-harm, promoted by “charlatans” whose chutzpah is as great as their lack of credibility.

But it is also an opportunity. Britain might be sinking, but there are still lifeboats available to Scotland. The fact that Scotland’s preference to Remain in the EU is trumped by the weight of numbers for Leaving elsewhere in the UK creates a powerful political narrative for Sturgeon: the only way to secure Scotland’s future is to put that future in Scotland’s hands. Time and again, she has despaired that Scotland faces “being dragged out” of the EU against its will, and this constitutes the “material change in circumstances” she believes justifies revisiting the independence question that was answered, but not settled, five years ago.

A new referendum, however, requires the agreement of the UK government in London, and hitherto that agreement has not been forthcoming. Sturgeon, as a consequence, is reduced to being a spectator as Britain’s great Brexit tragicomedy is played out. Suggestions for a “compromise” approach made by her government—which would, in essence, have seen the UK remain a member of the single market—were ignored in London. That in turn has prompted Sturgeon to harden her position: she now favors a second Brexit referendum that must include the option of remaining in, or rejoining, the EU.

The Paradox of Independence

Stubbornly, however, the opinion polls have barely shifted since 2014. Brexit may make the political argument for independence more intuitively plausible and even appealing, but it also complicates the practical meaning of independence. What currency would an independent Scotland use? (Sturgeon favors using sterling before moving to a distinct Scottish currency; the euro is not considered a viable option). How would the Anglo-Scottish frontier be managed? (A question which makes the arrangements reached between Northern Ireland and the Irish Republic a matter of singular, exemplary, concern for Scotland). Would Scotland enjoy an easy admission process to the EU, and if so, on what terms? (Probably, but not all the terms would be easily met.)

There is this, too: if, as Sturgeon insists, it is a ruinous mistake for the UK to leave a political union with its largest trading partner, how could it not be—as an economic matter—a self-inflicted error for Scotland to do likewise, given that 60 percent of all Scottish exports go to the rest of the UK (and just 18 percent to the rest of the EU). Moreover, if Brexit is difficult and complicated, how much more difficult and complex might negotiating the break-up of Britain be?

Those are hard—and live—concerns. The shape of independence cannot be ascertained until there is some clarity on the shape, and meaning, of Britain’s EU exit. It may simplify Sturgeon’s message but it unavoidably complicates the practicalities of independence. Which is one reason why Sturgeon sincerely wishes it had never happened. It also means that her demands for a second referendum now have been rebuffed by the UK government. No fresh plebiscite is likely until after the next Scottish parliament elections in 2021.

Another cloud looms, too. Later this year, Alex Salmond, Sturgeon’s predecessor as party leader and first minister, will appear in an Edinburgh court room to face more than a dozen charges of sexual assault, including two of attempted rape. It is difficult to estimate in advance the likely fallout but equally impossible to avoid the fact the trial will have major ramifications for Sturgeon, the SNP and, indeed, Scotland itself. Salmond was for years Sturgeon’s mentor; the figure to whom, more than any other, she owes her career. Unavoidably, his trial has the potential to more seriously threaten her political future than anything her opponents have hitherto been able to muster against her.

Such is the state of British politics at present, however—simultaneously in flux and stuck in the Brexit doldrums—that anything and everything seems possible. Brexit may yet be the end of the United Kingdom: the catalyst for a break-up that would once have seemed unthinkable and yet to many Scots now seems the most natural thing in the world.

Nicola Sturgeon has been waiting her whole life for that moment; if she needs to wait a little longer, past experience suggests she can.