Traveling by plane is terrible for the environment. Yet aviation is
very difficult to decarbonize. What’s the future of flying in a world of net-zero emissions? 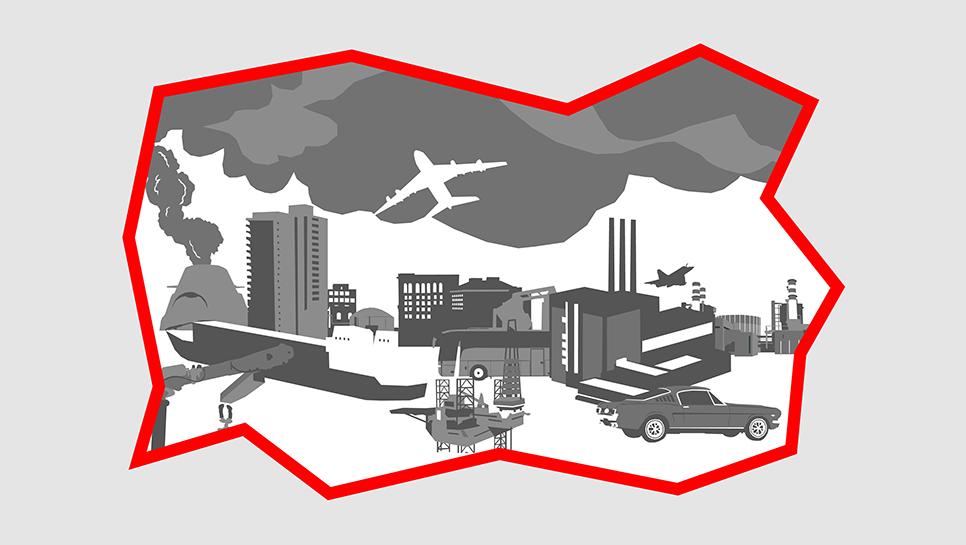 The United Kingdom, Uruguay, Finland and the states of New York and California are among the polities seeking to achieve “net-zero” emissions by 2050. Going for “net-zero”, or “carbon neutrality”, recognizes that it is impossible for humans to cease emitting carbon altogether. Rather, we need to drastically reduce the amount of carbon we put in the air while canceling out the remaining emissions, those most difficult to eliminate, by using “negative emissions technologies.” These include both old methods such as planting trees and new ones such as capturing carbon from biomass energy plants and sequestering it underground.

What are these stubborn emissions that even optimistic climate scientists expect to be around in 2050? Shipping and agriculture are part of the picture, as is fossil-fuel electricity production for those regions where renewables will not yet supply all the power all of the time. Cement and steel production is another likely future culprit. Nothing, though, says more about the climate change challenge than aviation.

The Guilt of the Jet Set

Getting on a plane causes massive amounts of carbon to be released into the atmosphere. (Not to mention planes’ other climate impacts, such as releasing condensation trails that form into heat-trapping clouds.) The European Commission website says that someone flying round-trip from London to New York generates as many emissions as the average European does by heating their house for an entire year. Two researchers in Canada calculated that skipping one transatlantic flight prevents twice as many emissions as eating a plant-based diet.

While aviation is currently responsible for only 2.5 percent of global emissions, traffic is increasing fast: passenger numbers are expected to nearly double to 7 billion per year by 2035. With emissions in most other sectors projected to decrease, flying could consume a quarter of our remaining “carbon budget” by 2050.

It’s not just that flying is both carbon-intensive and difficult to decarbonize. It also brings up difficult questions about fairness. A 2014 German poll found that Green voters, who are mostly middle-class, fly more than supporters of other parties. British actress Emma Thompson was accused of hypocrisy for flying from Los Angeles to London to take part in a climate protest. Climate activist Greta Thunberg dodges such charges by taking trains across Europe, thereby helping to popularize the Swedish word flygskam, or “flight shame.”

That the rich fly most reflects the inequality or injustice of climate change on both a global and local scale. Less than 20 percent of the world’s population has ever been on a plane, Boeing’s CEO Dennis Muilenburg said in an interview back in 2017. Americans have emitted the most carbon, but they will suffer less in a warming world than Bangladeshis. And unless the proceeds are properly redistributed, a high tax on energy costs poor citizens an unacceptably high share of their income.

It makes sense to ask well-off Green voters or climate activists to put their money where their mouth is, to travel by train if possible. Alexander Carius, director of the climate-focused think tank adelphi, told Berlin Policy Journal that his company installed a high-end, company-wide videoconferencing system to minimize flights—but public sector clients in particular still request personal meetings. The New York Times has proposed some ways for its jet-set readership to make a difference: fly coach to reduce emissions per passenger; fly direct to minimize energy-intensive takeoffs and landings.

But that won’t be enough to get a grip on emissions. Is the situation so bleak that one must either give up flying altogether or despair at ever stopping climate breakdown?

No, but our habits have to change, and government has to help people to enact that change. The German debate about Green member of parliament Dieter Janecek is illustrative in this regard. He recently caused a stir in Berlin by proposing a certificate scheme for German flyers: every citizen gets a certificate for three round-trip flights per year, and those who want to fly more have to buy additional certificates from other people. Yet Janecek himself spent the New Year’s period in far-flung Johannesburg, earning criticism in the media.

But the climate-conscious should not be held to standards dramatically higher than those they would impose on society. Intrusive as his scheme is, Janecek’s desire is not to end long-distance air travel but to ensure the true cost of flying is reflected in the price. It avoids banning anything and would reward non-flyers. Gradually increasing the price of plane tickets would create a world in which—shock, horror—only the wealthiest could afford to holiday on the other side of the world, at least until technology can reduce planes’ emissions further.

Moreover, society’s approaches to other pollutants or negative externalities are not as heavily reliant on individual restraint as we have come to expect from climate change mitigation. While those worried about the health effects of tobacco smoke were expected to exhibit some self-control and stop smoking at home, governments also taxed cigarettes and legislated for smoke-free schools, and yes, airplanes.

So what will flying look like in 2050, assuming the world gets close to its climate targets?

“Flying will be one of the very last guilty pleasures remaining in 2050, at a high cost,” Arne Fellerman, head of transport policy at Friends of the Earth Germany, told Berlin Policy Journal. He expects that by then, new taxes will have increased the price of air travel and thus reduced demand.
Today, in 2019, air passengers enjoy several tax breaks in Europe. No member state taxes kerosene (jet fuel) for domestic aviation; unlike Japan or the US, the EU does not tax it either. All of those competing to be European Commission president, the so-called Spitzenkandidaten, expressed support for a kerosene tax ahead of the recent European Parliament elections.

Some member states, such as Sweden and Germany, levy a tax on flights departing their territory, though there is no European-level aviation tax. Many member states exempt domestic flights from VAT, and all of them exempt intra-EU and international ones.

The EU Emissions Trading Scheme (ETS), meanwhile, covers aviation only partially: airlines flying within the EU must buy permits to cover 15 percent of their emissions and are given the remaining permits for free. The ETS burden on intra-EU flights will increase from 2021, but in recent years the EU has exempted flights to and from its territory in order to give the airline industry time to come up with its own global plan rather than face a patchwork of regulation.

That plan is now here. From 2021, under a scheme called CORSIA, airlines will be required to buy carbon offsets—e.g. pay to install solar cookers—to cancel out all emissions above 2020 levels. While the world cannot rely on offsets in the long-term, they can play an important complementary role when emissions in certain sectors or countries are difficult to limit with technology.

However, CORSIA is only mandatory from 2027, and there are real concerns about the efficacy of existing offset programs. A 2016 study prepared for the EU’s Directorate-General for Climate Action found that “the large majority” of offset projects registered under the UN’s CDM mechanism “are not providing real, measurable, and additional emission reductions.” This is the case when, for example, a coal mine gets credit for paying a Brazilian landowner to not cut down some forest, but the landowner buys a neighbor’s plot to deforest that instead and then sells their “offset” land to a rancher a few years later. The Commission must now decide how and whether to incorporate CORSIA offsets into its own ETS. At least seven member states have recently threatened to pull out of CORSIA if its sustainability standards are made any more lenient.

The other side of the coin is to make green modes of transports cheaper and faster by 2050, so that taking trains from, say, Paris to Prague for a weekend trip is not a ludicrous proposition.

It is notoriously hard to predict technological breakthroughs, but the aviation industry, having already significantly improved fuel efficiency, is starting to bet big on the planes of the future. “A new generation of decarbonized airplanes must be the target,” said Airbus CEO Guillaume Faury at the Paris Air Show on June 16.

Those planes are either completely electric or combine electricity with combustion engines or fuel cells. Faury’s company successfully tested an all-electric, four-seat air taxi in May; meanwhile, startups like Lilium hope to offer electric air taxis in cities as soon as 2025. Of course, a short-range plane nearly big enough for the whole family is not going to challenge EasyJet just yet. The technology for hybrid planes is somewhat more advanced, but these too face difficulties meeting aviation safety standards or fitting heavy batteries on board—solar power could play a role, but for reference, the first solar-powered plane to circumnavigate the globe took 505 days.

In any case, electric planes are a long way from being widely commercially available. Josef Kallo of the German Aerospace Center told Clean Energy Wire that “we will definitely need another 15 to 20 years” until bigger renewable-powered planes can be rolled out at large scale. For its part, the UK Climate Change Committee warns that “a fully zero-carbon plane is not expected to be available by 2050, particularly for long-haul flights.”
Flying Forever

Michael Müller-Görnert, transport policy spokesperson at the Traffic Club Germany (VCD), highlighted the potential of alternative fuels, especially for longer journeys. “Biofuels are no solution,” he told this columnist—growing biofuels often leads indirectly to deforestation—but “synthetic fuels generated with renewable energy have a lot going for them.”

The key one is synthetic kerosene, created by combining hydrogen with carbon dioxide captured from the air. It can already be produced today and used with existing engines, but it is significantly more expensive than normal kerosene. Taxing carbon would make clean fuels more commercially viable.

Here, then, is a short, necessarily speculative answer about what Berlin residents will do for their holidays in a net-zero emissions future. Going to Paris? High-speed train. Greece? Low-carbon flight(s). Johannesburg? Perhaps a mix of shorter carbon-free journeys and a longer, higher-carbon flight made more expensive by special taxes and the cost of synthetic kerosene. To get to this outcome, it helps to think about the stops in-between.