The civil war in Libya is getting worse, carrying the risk of spreading instability and extremism. Another refugee crisis could be looming.Yet so far the EU has been divided and passive. 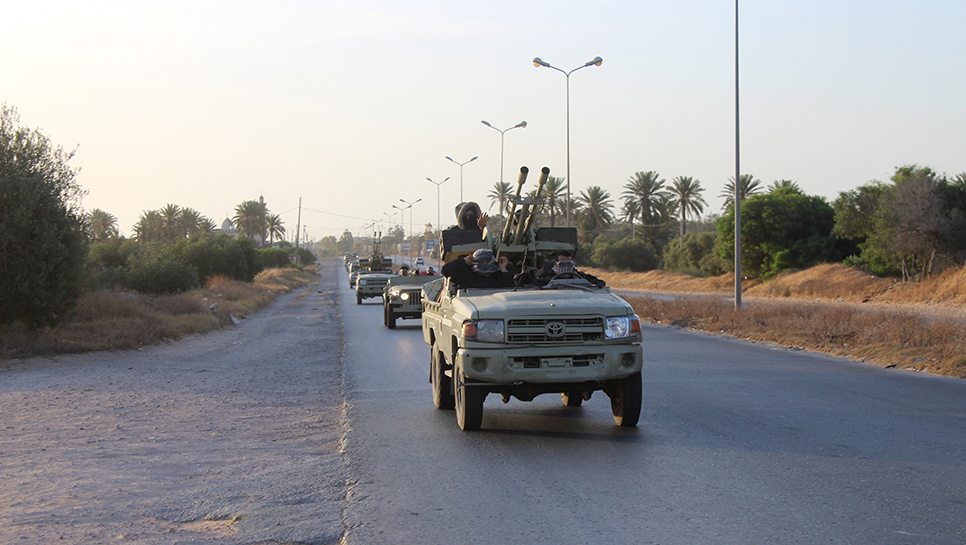 In early April, military commander Khalifa Haftar advanced on Tripoli, ordering a “victorious march” into the city. Three months later, with hundreds dead and almost one hundred thousand people displaced, UN Special Representative Ghassan Salame warned that this is ‘‘just the start of a long and bloody war.”

Indeed, the risk of even greater instability and suffering in Libya is very real, and the EU should be greatly concerned. From Libya, instability could spread, strengthening extremist groups across the Sahel, and leading to a new migration crisis. In short, Europe’s security is at stake, but the Europeans once again are uncoordinated, indecisive, and ambiguous.

The roots of the conflict lie in the fragmentation of Libya’s government and institutions in the years following the fall of Muammar Gaddafi in 2011. In December 2015, the UN brokered an agreement to set up a unity government, the Government of National Accord (GNA) in Tripoli, led by Faiez al-Serraj. However, the GNA never managed to assert its authority. It struggled to provide even basic services, existing side by side with numerous militias and a rival government in the east of the country, which was controlled by Haftar, who had returned from US exile.

On the Phone with Trump

International diplomacy continued to focus on crafting a unity government that would have included both Haftar and Serraj. A “national conference” was planned that was to forge a broad consensus. Negotiators were ready to give Haftar a dominant position as head of Libya’s armed forces on the condition that he place himself under civilian authority. Haftar engaged with these efforts while consolidating his power in the east by co-opting local actors and promising stability. He was backed by the UAE and Egypt, who supported him largely because of his strong opposition to the Muslim Brotherhood, and to a degree also by France and Russia.

On April 4, Haftar finally made it clear that he wasn’t interested in a compromise. He launched his offensive on Tripoli only two weeks before the national conference was supposed to convene—and while UN Secretary General António Guterres was in the city.

The fighting in Libya is unlikely to wind down quickly; there has been little movement on the front lines in recent weeks. External powers are increasing their support for both sides, giving them the means to continue fighting and strengthening their resolve. The UAE, Saudi Arabia, Egypt, and Jordan are supporting Haftar’s offensive with a mixture of cash and weapons. Meanwhile, there is evidence that Turkey and Qatar have been providing weapons to the GNA, both opportunistically and because many of its supporters are aligned with the Muslim Brotherhood.

The United States has taken an ambiguous stance. In mid-April President Donald Trump spoke to Haftar on the phone and expressed support for his efforts to tackle terrorism. The move appeared to reverse the US’s previous backing for the GNA and was interpreted as a green light for Haftar to go ahead.

Meanwhile, Europe has essentially limited itself to issuing statements. Its naval operation Sophia, mandated to counter trafficking and implement the UN arms embargo on Libya, no longer has any ships at its disposal after a spat between Italy and other member states. The EU has condemned the assault by Haftar’s forces, identifying it as the origin of the current bout of fighting, and called on “all parties to immediately implement a ceasefire.”

But it has has refrained from supporting the GNA or even identifying it as Libya’s legitimate government. France’s stance has been particularly ambiguous: in April, it stalled a UK-drafted UN resolution condemning Haftar’s offensive. Paris also blocked an EU statement which would have singled out Haftar’s offensive for criticism.

Europe can ill afford to take a backseat role in Libya. Halfhearted calls for a ceasefire won’t stop the fighting. There are few incentives for either side to lay down their weapons: the GNA fears that a ceasefire could strengthen Haftar by allowing him to maintain recent territorial gains. Meanwhile, the commander himself has gone for broke, destroying the peace process and alienating many who were previously open to accommodating him. Haftar appears to believe that accepting a ceasefire would be a sign of weakness that would harm his reputation.

Meanwhile, the conflict in Libya risks triggering a new migration crisis. Over the past years, the EU has managed to essentially halt migration flows from Libya by providing funding to Libya’s coastguard and assorted militias―despite their involvement in abusing migrants. It is not difficult to imagine migration flows to Europe increasing again if the fighting continues, both because militias will be less able to stop migrants from leaving and because more Libyans will try to flee the violence in their country. The conflict will also increase the very high risk of abuse for migrants currently mired in Libya.

The longer fighting goes on, the more destructive it is likely to be, and the harder it will be to achieve any kind of reconciliation between different factions. If Haftar prevails, many Libyans are likely to continue to oppose him, and he is unlikely to gain full control over the country. Moreover, Haftar is 75, so the problem of succession would soon present itself. Yet any fragmentation of Haftar’s forces would also lead to a power vacuum.
Either scenario spells further instability. The risk that extremists will take advantage will increase: despite its defeat in 2016, the so-called Islamic State is still active in Libya and has carried out attacks on government institutions. The situation in Libya will also further destabilize the Sahel region which would have major repercussions for Europe.

For years, behind a thin veneer of unity, Europeans have failed to agree a coordinated approach to Libya. France and Italy pursued competing and ultimately unsuccessful approaches to stabilizing the country. Tensions between French President Emmanuel Macron and Italy’s euroskeptic government have made it difficult for Paris and Rome to defuse their differences.

But now, with stakes so high, Europeans have a responsibility to halt the escalation of the conflict and prevent further suffering. At a minimum, they should provide Operation Sophia with sufficient assets to enforce the UN arms embargo on Libya. Ideally, they should persuade the US that its interest in a stable Libya is best served by getting Haftar to agree a ceasefire. Together, the EU and the US could enforce the arms embargo, perhaps through a NATO operation. This would prevent further escalation and push Haftar and the GNA towards an armistice. A stable and unified Libya would still be a distant prospect, but with a ceasefire in place, diplomacy could restart, giving Libyans a chance to finally build a consensus about the country’s future governance.