Home Berlin Policy Journal The Glass Is Half Full

Integrating refugees is painfully slow business―even slower than for other groups of migrants. Among Western countries, Germany is actually doing reasonably well. 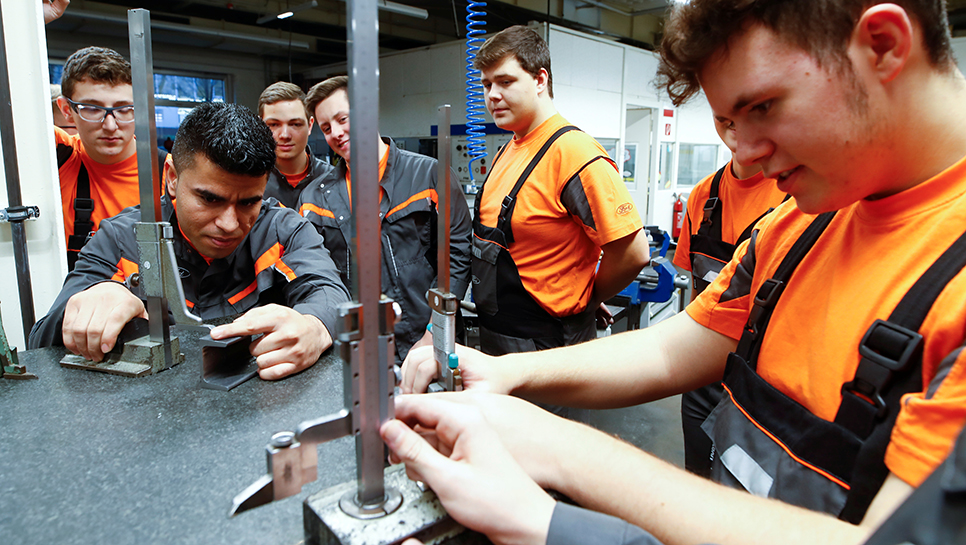 It was the summer of 2015. Hundreds of thousands of refugees from Syria, Afghanistan, Ethiopia, and elsewhere were making their way to Germany, drawn by Chancellor Angela Merkel’s decision to keep the borders open and by crowds of welcoming Germans. The country was torn between an intense joy over being able to help and a deep fear of being overwhelmed.
At a press conference in Berlin on August 31, Merkel was asked about the immense challenges of this massive influx. “Wir schaffen das,” she said, meaning “We can do it.“ It was a slogan that became iconic. Supporters of a liberal refugee policy used it as a rallying shout; opponents repeated it with deep sarcasm.

Nearly four years later, normalcy has mostly returned to Germany. Tight patrols on the EU’s borders and a series of bilateral agreements with neighboring countries have sharply brought down the number of refugees newly arriving in Germany. Even so, the country is still home to 1.7 million asylum seekers and refugees, most of whom have arrived in 2015 and since.
Integration is happening—and even happening faster than in many other Western countries—but it continues to be a lengthy, difficult, and demanding process. Even now, only every third immigrant from war-torn countries like Syria, Iraq, Afghanistan, or Somalia has a job that gives him or her access to social security benefits, according to a discussion paper published in June by the Berlin Institute for Population and Development.

“There is no doubt that this is a success, but it is to be enjoyed with some caution,” said the institute’s director Reiner Klingholz. “Many of the refugees work in sectors where fluctuation is very high, and most of them have temporary or low-skilled jobs.” Even people who may have had their own business or who held management positions back home now work in restaurants, hotels, or cleaning services.

Still, integration into the labor market is happening a little bit quicker now than in the 1990s, when Germany took in a million refugees from former Yugoslavia. Five years after arrival, the Berlin Institute for Population and Development said, just under half of those refugees had found jobs. After ten years, the percentage went up to 60 percent. It took 15 years for refugees from Yugoslavia to reach an employment share of 70 percent, which corresponds to other immigrant groups.

Germany has integrated the most recent wave of refugees faster than most other industrialized countries. According to a study published in January by the Organization for Economic Cooperation and Development (OECD), the average among its 33 member states was that five years after arrival, only one in five refugees was employed, with a particularly low percentage for women.

Low employment translates into lower well-being as measured by household income, housing conditions, life satisfaction, social support, and students’ skills, the OECD writes. Even in comparison to other migrant groups, refugees do badly. On average, it takes them 20 years to catch up even with other migrant groups.

Three main reasons stand out: first, refugees do not make a choice about leaving their country but are forced to do so; second, they are often less qualified than other migrant groups; and third, many are traumatized by persecution, war, and tragedy during their flight.

The numbers are shocking. For Germany, the IAB-BAMF-SOEP Refugee Survey, a repeated survey among 5000 refugees, showed that one-quarter of respondents had survived shipwrecks. Two-fifths had been victims of physical assault; one-fifth had been robbed; more than half had fallen victim to fraud; more than one-quarter had been blackmailed; and 15 percent of female refugees reported having been sexually assaulted.
So what seems slow at first look—only one out of three Syrians, Afghans, or Eritreans in Germany holding down a job that gives access to social security—is actually a huge achievement. On arrival, according to the survey, fewer than one out of ten refugees spoke any German. Today, one third has good or excellent language skills, and another third has reasonable German.

Another issue that takes time to remedy is the lack of education and training: every fourth refugee who arrived in Germany between 2013 and 2016 had never gone to school or only attended elementary school, the Berlin Institute for Population and Development said. Three quarters had no professional education. To make things worse, new arrivals had little information about the German labor market and not much of a personal network to help them along.

“Getting qualifications takes a lot of time: maybe two years to learn the language and then another three years for professional training,” Klingholz said. Many refugees need to quickly earn money in order to support family members back home or in transit, or to pay back the traffickers who brought them to Germany. “Intellectually, these people know that they are getting themselves stuck in lower-paid and more precarious jobs, but this is overruled by their needs.”

A Thicket of Regulations

By now, however, most refugees have been in Germany long enough that individual issues have ceased to weigh so heavy, said Klingholz. Instead, it is institutional hurdles that keep them away from jobs and therefore integration. As a federal state, Germany has an enormously complex system of federal, regional, and local authorities, which all have a say in granting asylum, accepting qualifications, or providing access to the labor market, training opportunities, language courses, medical benefits, or housing.

The relevant sector of legislation is as extensive and complicated as tax law once was. For instance, there are many kinds of residence permits that all give access to different rights and benefits, creating enormous uncertainties for the refugees themselves, but also for companies considering training or hiring them. At Berlin’s Ausländerbehörde, the agency that deals with foreigners, procedural notes alone amount to some 800 pages.

“The law is like an overprotective mother,” said Engelhard Mazanke, the agency’s head. “Sometimes, it really strangles us. And the more complex it is, the more difficult it is to do justice to an individual case.” Analysts say that much of the bureaucratic tangle is due to contradictory objectives: trying to be discouraging to potential new asylum seekers (in a clear turn-around from 2015), yet accepting that those who already are in the country should be given help to integrate.

Germany, with its ageing population and lack of skilled workers, might do well to take a clearer and more generous line, Klingholz said, pointing to two demographic characteristics of the recently arrived refugees. First, there was the high number of children: more than half a million refugees were under 18 when they registered for asylum between 2015 and 2018, according to his institute’s data. By now, younger children have been integrated into the German school system, giving them native German and a perspective to acquire much better professional skills than the older generation.

The largest group among those asylum seekers, however, were young adults―again, half a million in the age group 18 to 29. More than two thirds of these are men. And while young men can certainly adapt more easily to life and work in Germany than older people, they also represent a higher risk to society if they cannot find jobs and set up families.

“We are running out of time,” said Eberhard Mazanke from the Berliner Ausländerbehörde. “We have many young men here, people in their 20s, and they want to start their lives.”