The second Modi government offers Europe political stability and openness to foreign companies. It also shares a view of China. 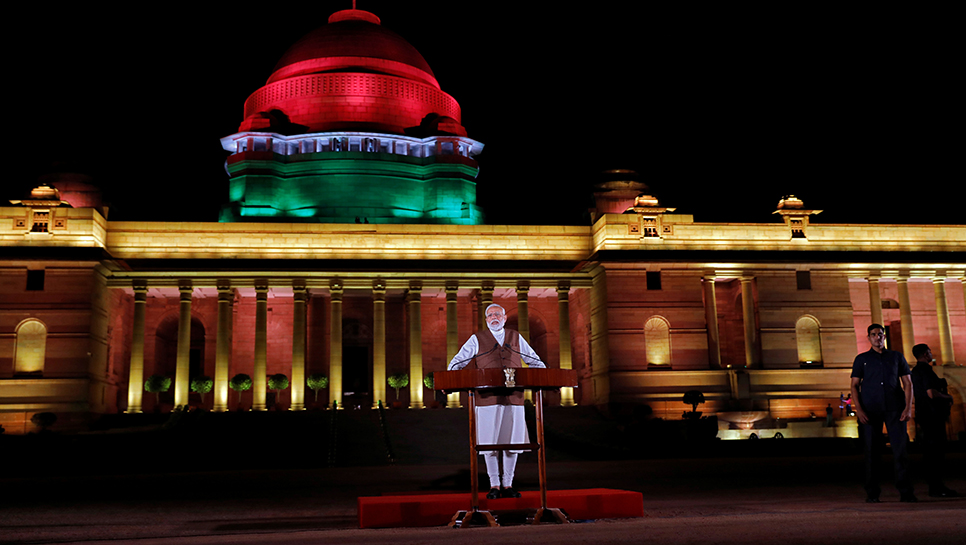 This May, incumbent Prime Minister Narendra Modi led his Bharatiya Janata Party (BJP) to a resounding victory in India’s national election. The fact that 600 million people successfully exercised their franchise should give pause to Westerners who portray Indian democracy as merely a little brother to its older Western counterpart. Modi and his Hindu nationalist party have a new mandate to reshape India.

The first promise Modi’s new government holds for European states is political stability, which makes it easier to build lasting diplomatic ties. Unlike the governments of the 1990s—when Indian politics was terribly unstable and coalitions were prone to fall apart, repeatedly requiring new diplomatic efforts from Europe—the BJP looks a safe bet to last the whole five-year term. Moreover, as of now, the party appears as the best contender for the 2024 polls. So it’s a good time for the EU and its member states to unveil medium-term strategies for their relations with India.

In the Company of Indian Companies

Within this political context, Modi’s second term promises economic openness. Yes, his 2014-2019 tenure did not lead to the privatization of any major public company. Yes, new data suggest an economic slowdown occurred in the second half of BJP’s recent rule, and economic growth is probably lower than the New Delhi government would like to admit. Yes, Modi’s flagship campaign, “Make in India,” aimed at attracting foreign investment and creating jobs, was less successful than expected. But one thing remains certain: Modi will use both hands to keep the doors of the Indian market open to foreign firms.

While corruption, poor infrastructure, and uneven levels of governance remain huge thorns in India’s side, the rankings given to the country for the ease of doing business have improved under the BJP. The “Make in India” campaign will continue as long as Modi is in office. The program’s revised list of industries open to FDI includes significant sectors such as automobile production, chemicals, pharmaceuticals, defense, railways, biotechnology, and renewables. Some of these hold great opportunities. India has, for instance, recently built an International Solar Alliance of countries that wish to enhance their use of solar power due to their geographical position. Some European nations, such as France, are visibly attempting to take advantage of this development.

One thing must be remembered, however: large Indian industrial houses remain one of the BJP’s main constituencies. They are among the Party’s main donors and the main beneficiaries of its rule. Modi’s rhetoric has often focused on India’s poor, whereas the BJP’s electoral manifestos keep promising easier ways of investing in India. So it appears that Modi supports both India’s poor and the world’s rich. But despite all of this, it is actually India’s rich―the large Indian companies―for whom Modi most often rolls out the red carpet.

While this approach may offer some opportunities for cooperation, it also reduces the chances for European companies. Two crucial recent policies regarding FDI in retail and the procurement of defense technologies serve as examples here. Despite his own earlier opposition to FDI in retail, Modi allowed it to continue after taking over power in New Delhi. This came as a boost to firms like H&M and IKEA. However, his government recently introduced a rule forcing retailers to source 30 percent of the value of the sold goods from India. As for defense procurement, India’s Ministry of Defense imposed the rule that any foreign company selling major, strategic defense technologies to India needs to have an Indian partner. The controversy around the Rafale jet signalizes the Indian government may in fact try to pick the company itself. In either case, the Indian government is making sure that the country’s companies cannot be thrown out of the race.

Even with an Indian government focused on attracting foreign investment, smaller European nations don’t have much to cheer about. As evident from his foreign trips, Modi, like his predecessors, focuses on New Delhi’s main partners in Europe: Russia, Germany, France, and the United Kingdom. As far as his European policy is concerned, India’s prime minister has not ventured into uncharted territory by, for instance, visiting any smaller countries in central and eastern Europe.

Among European capitals, Paris was perhaps most successful in developing its ties with New Delhi, with the government providing a huge diplomatic push to the economic endeavors of its companies. Germany remains India’s top trading partner on the Old Continent, while United Kingdom was the biggest European source of FDI inflows to India over the last 18 years.

Smaller European nations have a much more difficult position with regard to India, as they are both less recognizable and have less to offer in terms of capital and produce. Therefore, they will have to look for niches in the vast Indian market. Modi’s policies do offer some opportunities, however. For instance, a Polish company is installing screens at bus stops as part of the New Delhi’s Smart City initiative.

In some areas, European nations and companies are bound to compete with each other elbow to elbow on their run to India. There is no telling when the India-EU Free Trade Agreement will finally be completed—negotiations began in 2007—but it may end up benefitting the better-positioned companies of western Europe rather than the firms of newer and poorer member states. Meanwhile, France is likely to expand its ambitious push into India’s defense market, which will upset Russia. And if and when Brexit is completed, some Indian companies may start to depart the United Kingdom, which will encourage the major cities on the European continent to compete in order to attract them.

On the Same Page, Sometimes

When it comes to the global world order, there are areas where European Unions and its members may hope to share sentiments with India, and ones which will remain thorny issues. Europe and India have similar attitudes toward the rise of China; that is one aspect of convergence. India’s and EU’s recent steps show that both are willing to accept Chinese investment in general but aqre wary of Beijing’s rising political clout. Indian ministers have expressed security concerns about the Chinese telecoms company Huawei, but the country has not yet taken a decision on barring Huawei from its upcoming 5G trials. Similarly, New Delhi took a firm position against China during the Doklam standoff in 2017, when Indian and Chinese forces squared off (without violence) across disputed territory. But it did not invite Australia to its navy exercises, apparently not wanting to appear too militaristic. India also did not take part in either of the Belt and Road Forums organized in Beijing—and yet is the biggest beneficiary of the China-created AIIB.

Both New Delhi and the major European nations are also keen to retain the JCPOA deal with Iran and unhappy that Washington and Teheran are again on a collision course. If the US and Iran step back from the brink, Brussels and New Delhi will be equally relieved.

India’s relations with Russia, however, will remain a diplomatic challenge for the EU. Moscow is a close political friend to New Delhi and a crucial provider of military technologies (alongside Washington). Even though New Delhi’s elites and experts believe that the US is a much more important global partner, India does not wish to be pushed into a single global alliance. It prefers to hedge its bets. Therefore New Delhi has not criticized Russia’s activities in either Ukraine or Syria. A solution to the Ukraine crisis is not on the horizon, and Europe should know that this is not an issue where it can hope for India’s support.

The European Union will probably not be happy with Modi’s policies toward refugees, either. BJP, a Hindu nationalist party, has proved time and again that it is unwilling to welcome Muslim refugees such as Rohingyas from nearby countries, even when it is under obligation to do so. After the persecution of Rohingyas started again in Myanmar, around 40,000 of them managed to flee to India. The BJP government refuses to treat them as refugees, however, and considers them illegal immigrants who must be deported. But while New Delhi and Brussels may not be on the same page, the geographical distance between them means they are not likely to face the same refugee crises.

A word of warning seems appropriate, too, where India’s attitude toward religious minorities is concerned which has undoubtedly hardened unter the Hindu nationalists of the BJP. While this is a matter of concern, the EU should not repeat its past mistakes of being too preachy.

Looking at things from a global and long-term perspective, one of the most important conclusions is that India’s ties with the US are bound to grow much faster than the ones with Russia. New Delhi and Washington broadly agree on the need to counterbalance Beijing, among many other things. This should eventually open new possibilities for cooperation between European countries and India, too. Such developments may extend well beyond Modi’s tenure and shape a part of the global order.