Home Berlin Observer Watch Out for a Green Chancellor

With the parties in Angela Merkel’s coalition government in deep disarray, change is afoot in Germany. 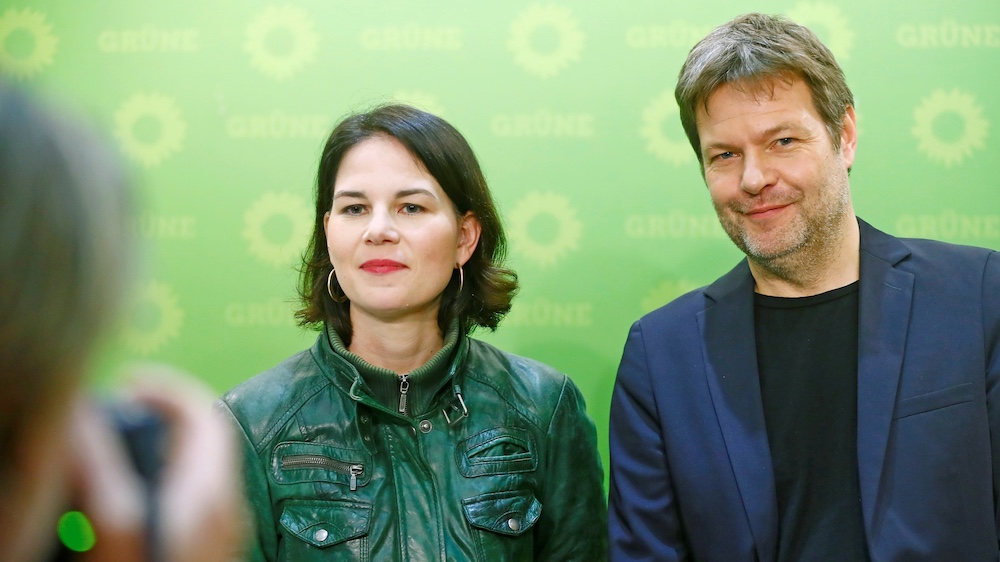 Angela Merkel’s government is stumbling toward its end. Her junior coalition partner, the Social Democratic Party (SPD), is in turmoil after party leader Andrea Nahles threw in the towel on June 2. Merkel’s own conservative bloc is suffering from the inexperience and gaffes of her chosen successor, the new CDU leader Annegret Kramp-Karrenbauer.

So watch out for early elections in the European Union’s most populous country this fall—which could possibly bring the first Green chancellor in German history to power. For the first time ever, one opinion poll showed the Greens overtaking not only the SPD, but Merkel’s CDU/CSU, too. The Green party is on a roll, boosted by an enormous surge of public concern over climate change and other environmental issues. But their meteoric rise is also the consequence of the weakness of those presently in power.

A forsa Trendbarometer poll published on June 1 saw the Greens at a staggering 27 percent of the vote, three times what the party got at the last federal election in 2017. The CDU/CSU would come a close second at 26 percent (minus 7 percent) and the SPD a distant third at 12 percent (minus 8.5 percent). “This is the latest culmination of a development that has been in the make for years: a loss of trust in the conservatives and in particular in the SPD, which is in danger of drifting into complete insignificance,” the head of the polling institute, Manfred Güllner, explained. (An Insa poll, published June 3, had the Greens at 25 percent, one point behind the CDU/CSU at 26 percent, with the SPD registering 14 percent.)

For sure, the SPD—a party with a proud tradition reaching back more than 150 years—is in full disarray. Under Chancellor Gerhard Schröder, the last SPD politician to hold that office, it lost much of its soul when it grudgingly endorsed Schröder’s labor market and social benefits reforms. Since then, the SPD has been worn down as junior partner in three of Merkel’s four coalition governments.

When Nahles, 48, took over the chair of the SPD in September 2017, she was hailed as the last hope of a party that was sinking ever faster. It was also replacing its leaders at alarming speed (often enough with Nahles’ help—she was instrumental in getting rid of Franz Müntefering in 2009 and of Sigmar Gabriel in 2017).

Nahles has a brilliant analytical mind and huge experience both within the party and in government, yet her sharp rhetoric was often jarring even to SPD supporters. So when the European elections on May 26 went so terribly wrong for the SPD, Nahles got all the blame. Exhausted by the mobbing, she resigned as party and Bundestag group leader and announced her retirement from politics. “Thank you and take care,” she told journalists when leaving the SPD headquarters for the last time.

An interim party leadership consisting of three regional SPD politicians is now charged with mapping the way forward. This will include a discussion at the end of June over whether to continue the “grand coalition”, or GroKo (“Grosse Koalition”) under Merkel, that much of the SPD grass roots hate anyway.

Merkel played it cool, at least initially. She did not believe that a change of leadership in the SPD was a signal of instability, the chancellor declared publicly. The SPD’s personnel decisions, she added, should not keep the government from doing its work. Yet even Merkel must have known how false those words sounded, given the sorry mess that her own party, the Christian Democrats, is in, too.

Back in December 2018, Merkel stepped down as CDU party leader, making way for Annegret Kramp-Karrenbauer. But AKK’s (as she is known) honeymoon was short. Merkel, enjoying rising personal popularity scores, showed absolutely no willingness to cede the chancellery to Kramp-Karrenbauer early. Nor did she exert herself in the European election campaign. Meanwhile, AKK made her own mistakes, trying to please the different groups within her party and mishandling social media.

Ironically, it’s the SPD’s tragedy that for now is stabilizing the CDU. The party’s establishment is keenly aware of how many mandates its stands to lose—and how easy it is to be drawn into the same kind of downward spiral that the SPD is experiencing. Not only the forsa poll suggests that voters who Merkel was able to attract by being more liberal than her party are now switching their support to the Greens.

But even if the CDU has every interest to avoid early elections, the coalition is not likely to outlast this year. “I believe it will last until the fall. But until Christmas—nobody can say,“ said Armin Laschet, the powerful state premier of North Rhine-Westphalia and one of the leading CDU contenders for Merkel’s succession.

The moment of truth is likely to come with regional elections scheduled in three eastern German states this fall. Here, disappointment with the governing parties has not benefitted the Greens as much as in the west; instead, the clear winner is the right-wing populist Alternative für Deutschland (AfD).

To make matters worse, the east German AfD groupings tend to be particularly radical, revisionist, and xenophobic, which will push the entire party even further to the right. Every vote for the AfD will weaken Merkel, whom the AfD depicts as Germany’s worst public enemy because of her policy on refugees in 2015/16.

In the elections in Saxony on September 1, the AfD is expected to come close to the ruling CDU; on the same day, the SPD will probably lose Brandenburg, one of its few remaining regional strongholds. The elections in Thuringia will follow six weeks later, but by then, the damage for Merkel’s coalition will probably have been done. The SPD, giving in to grass roots pressure, will probably pull out.

“No, they won’t stay,” said Wolfgang Merkel (no relation), a Berlin political scientist and long-time SPD associate. “At that stage it will be rational to say that we cannot stop the downswing while in government. We will have to try to find a new drive in an opposition role.”

The Greens Are Coming

Merkel could try to carry on, either in a new coalition with the Greens and the liberal FDP, or as head of a minority government. Neither is likely given the fact that the Greens will do everything to push for early elections to cash in on their extraordinary surge.

Robert Habeck, the party’s charismatic and charming poster boy, would be the obvious choice, but Annalena Baerbock, his co-leader at the head of the party, is credited with a cooler intellect and better people skills. So far, the Greens themselves have carefully avoided discussing who would be their candidate for the chancellery.

”Stop that chancellor nonsense,” Habeck keeps saying. It’s a sound strategy—don’t jinx it, and avoid raising hackles for as long as possible. However, given the quickly worsening state of Merkel’s coalition, the Greens may soon have to address that issue.