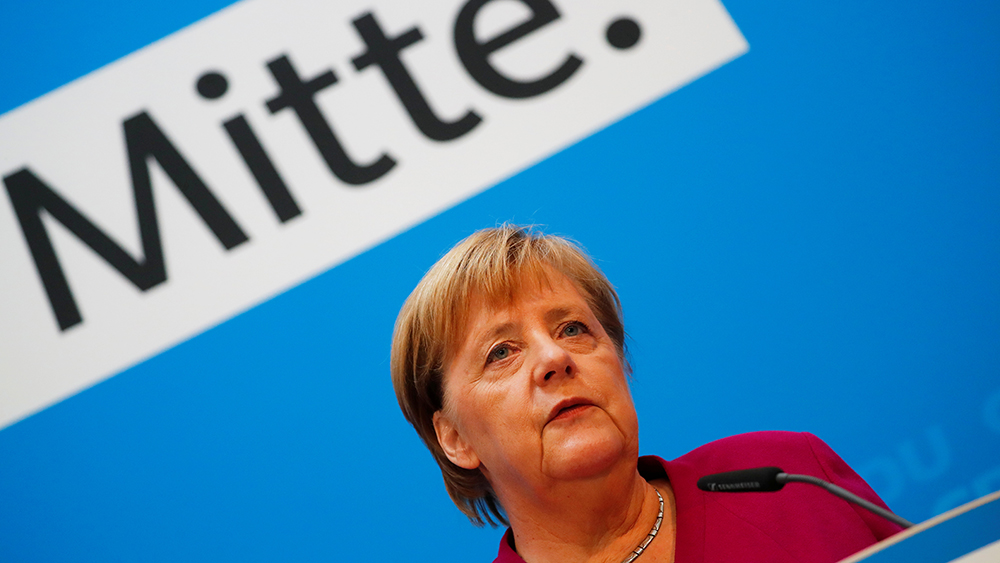 At the height of the German government’s latest coalition struggle, infratest dimap, a well-respected polling institute based in Berlin, dropped a bombshell. For the first time ever, the right-wing populist Alternative für Deutschland (AfD), a party turning ever more xenophobic, nationalist, and revisionist, has overtaken the Social Democrats (SPD) in a nation-wide poll. With 18 percent of the votes, it now appears to be second only to Angela Merkel’s conservative CDU/CSU block.

“The SPD overtaken, now we’re targeting the CDU,” one of the AfD’s leaders, Alice Weidel, gloated on Facebook.

The SPD is being hit particularly hard. According to infratest dimap, it is now down to 17 percent. But all three coalition parties in Merkel’s government are being hammered for the power games they’ve been indulging in over the past several months. The latest example is the squabble over Hans-Georg Maassen, head of the domestic intelligence service; the controversy has badly tarnished the government’s reputation.

It’s a convoluted story, but let’s try to keep it short: it started when Maassen, a critic of Merkel’s open-door policy for refugees in 2015, appeared disloyal to the chancellor in a newspaper interview he gave in early September. His boss, interior minister Horst Seehofer, who fiercely dislikes Merkel and her liberal policies, protected and possibly even encouraged him.

Merkel should have gotten rid of Maassen, but she didn’t dare to: his patron Seehofer is head of the CSU, Merkel’s Bavarian sister party, which is under huge pressure ahead of a regional election in Bavaria on October 14. Seehofer could very well have decided to break up the Berlin coalition.

So instead, Merkel’s junior partner, the SPD stepped in and demanded Maassen’s head for being too soft on the right-wing extremists. However, in a first coalition crisis meeting in mid-September, SPD party leader Andrea Nahles committed a major strategic error: she agreed to have Maassen promoted to state secretary in the interior ministry, just to get rid of him as head of the domestic intelligence service.

What ensued was a huge outcry not only from SPD members but from Germans across the political spectrum—many of them earning far less in total than the pay hike of €2500 a month that Maassen would have received with his promotion.

Nahles backtracked, apologized publicly for her lack of judgment, and asked Merkel and Seehofer to reconsider the Maassen decision. On September 23, the leaders of the three parties met again and decided that Maassen would be transferred to the interior minister as a special advisor without any promotion or pay raise.

Even more remarkably, Merkel also said sorry for getting it wrong. “We thought too little of what people rightly think when they hear about a promotion,” the chancellor said, adding uncharacteristically, “I very much regret that this could happen.” Only Seehofer—the man behind two major crises in only six months that this coalition has been in government—saw no reason to say sorry.

Neither apology nor lack thereof is likely to make any of the three parties regain the trust of the public in a hurry. If elections were to take place this Sunday, Merkel’s conservative block would only be getting 28 percent of the vote—their worst result ever.

Still, the CDU/CSU remains Germany’s largest political force, giving it first chance at the chancellery even if coalition building is becoming ever more complicated. For the SPD, it’s a very different story. According to infratest dimap, Germany’s oldest political party with a proud history of more than 150 years has slipped to third place only just before the Greens.

Exactly 20 years ago, the Social Democrats got Gerhard Schröder elected as chancellor with more than 40 percent of the vote. Now, the chance of ever regaining the chancellery seems remote. The SPD is torn between an urgent wish to leave a coalition government that has caused it so much pain, and an enormous fear of what new elections might mean for the party.

In this decline, the SPD is following the same downward trend that social democratic parties across Europe have witnessed, from France’s Parti Socialiste under Francois Hollande and Italy’s Matteo Renzi’s Democratic Party to Greece, the Netherlands, and the Czech Republic. Everywhere, Social Democrats have failed to offer answers to the fears caused by globalization and migration, increasing inequality, rising rents, and low pensions.

Parties like the AfD don’t have an answer either (except to keep migrants out), but given the weakness of Merkel’s government, they don’t have to provide solutions. Every single hour that Merkel, Seehofer, and Nahles spent on the Maassen affair helped to reinforce their anti-establishment message.

At the same time, AfD politicians have become very skillful at creating just the right amount of public outrage over their xenophobic and revisionist statements. They are radical enough to keep politicians, the media, and the electorate talking about their message, but not so much that it would rattle their own political base.

Of course, the other party leaders aren’t blind or deaf to the AfD’s success. After the Maassen affair was finally resolved, Angela Merkel pledged to do everything possible to get her government to concentrate on substantive issues. Lars Klingbeil, secretary general of the SPD, even called for a completely new working mode in the coalition.

Good intentions, however, won’t replace the trust that has been lost. Two out of three Germans, another polling institute reported, do not believe that the leaders of Merkel’s coalition will ever work together again in good faith.