Despite Vladimir Putin’s crackdown on protestors, politicians in eastern Germany are emphasizing their ties with Russia—and practicing post-communist identity politics. 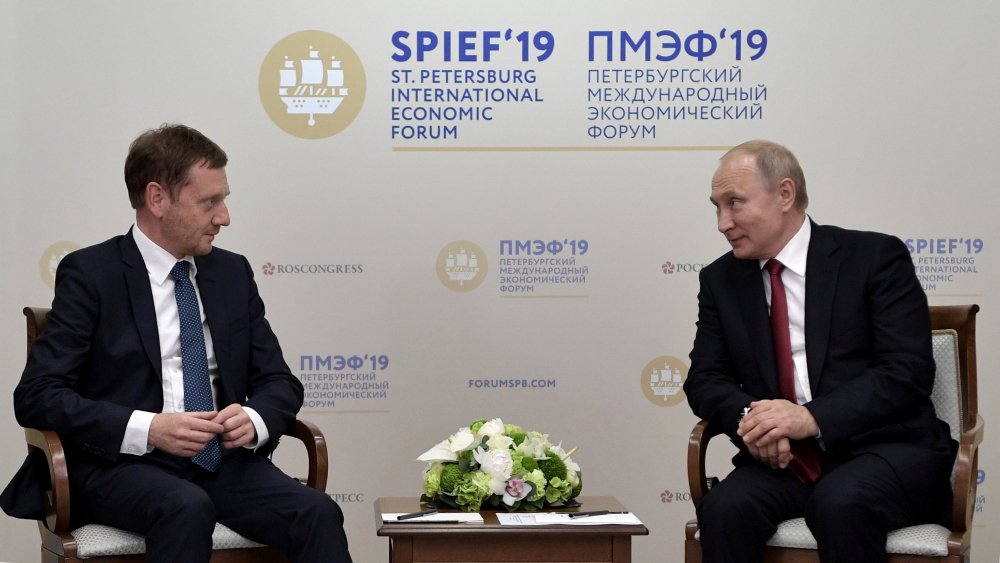 From the early days of Russia’s invasion of Ukraine, Germany’s Chancellor Angela Merkel has been the staunchest defender of EU sanctions. But since early June, she has been facing a rebellion from within her own country: Regional leaders from eastern Germany—including prominent members of her own Christian Democratic Union—have publicly called for an end to the sanctions.

Much of it is electioneering. Saxony and Brandenburg will hold regional elections on September 1; Thuringia follows on October 27. In all three states, the right-wing, populist Alternative für Deutschland (AfD), which is very close to Russia, is expected to do extremely well. Calling to lift the sanctions is an attempt to woo back at least some votes.

The timing, however, could not be worse. Russia is back in the headlines after police cracked down brutally on demonstrations against President Vladimir Putin in Moscow on the last weekend in July. More than 1,300 demonstrators were detained for taking part in an unsanctioned rally; many of them could face harsh sentences. The protests were kicked off by the decision of Russian election officials to bar opposition candidates from running in local elections in Moscow scheduled for September 8.

That same weekend saw Russia’s best-known opposition leader, Alexei Navalny, briefly released from prison to be treated for what officials said was an “allergic shock.” His doctor, in contrast, said it was possible he was poisoned. Navalny is serving a 30-day prison term for calling on Russians to demonstrate. From a moral point of view, a soft stance on Putin seems rather questionable right now.

The Local Cost of Sanctions

Yet the prime ministers of all five east German Länder had joined the call for lifting the sanctions, and even after the violence in Moscow, not one of them chose to speak out against Putin’s regime. When Bild, Germany’s most popular tabloid, asked them to comment on the events, they either declined to answer or said they could not judge the situation.

“I don’t have any detailed information about the reports from Moscow,” said Saxony’s Prime Minister Michael Kretschmer, a member of Angela Merkel’s Christian Democrats, according to Bild. “I therefore cannot make a judgment.”

Kretschmer has been in office for less than two years and is now fighting a difficult reelection campaign against the AfD. He was the first to call for an end to the EU sanctions after meeting with Putin at a business conference in early June. He clearly is proud of that encounter: At some of his election rallies, he has displayed a giant photo of his tête-à-tête with the Russian president.

Certainly, there is an economic argument to be made against the EU sanctions. They have hit the eastern part of Germany much harder than the western part. In the east, it was mostly mid-sized engineering companies with a tradition of doing business with Russia who suffered most. The uncertainty of the political environment and the threat of US sanctions against Russia hurting European companies weighs on them particularly heavily.

According to the Ost-Ausschuss der Deutschen Wirtschaft, an organization set up by German industry to help business with Russia and Eastern Europe, eastern Germany’s trade with Russia declined by 28.7 percent from 2013 and 2018. In western Germany, it only shrunk by 17 percent during the same time. In Saxony, the decline was truly dramatic, at 72.5 percent from 2013 to 2018. Not all of this is due to the sanctions, however—Russia’s economic woes and the reorientation of German companies toward western markets or to China also played a role.

In any case, trade figures alone cannot explain eastern Germany’s soft stance on Russia which doesn’t even make the top ten of Saxony’s export destinations. Thirty years after the fall of the Berlin Wall, it is a curious manifestation of identity politics, fed by nostalgia for the certainties of life in the German Democratic Republic and resentment over being belittled by West Germans.

It’s powerful—the AfD, for one, plays it very skillfully. Politicians from other parties also say that in talks with their constituents, concerns about Germany’s relations with Russia come up regularly. But it is also a strange twist on history. After all, East Germany’s 1989 revolution—a source of enormous pride for this part of the county, and for good reason—was directed against a regime set up and kept alive by Moscow since 1945.

It was Russian tanks that quelled the 1953 uprising in East Berlin and guaranteed the communist regime’s power for the following decades. In 1989, East German protesters cheered the Soviet reformer Mikhail Gorbachev, but they still feared his army of more than 500,000 soldiers stationed across the GDR.

Once the miracle of Germany’s peaceful reunification had happened, eastern German cities and towns were quick to rename the many streets that had been dedicated to “German-Soviet Friendship.” Schools were only too happy to drop the unpopular mandatory Russian lessons from their curricula. Freedom, in the aftermath of 1989, meant opening up to the West as an antithesis of the old, eastern regime.

“There are many people in eastern Germany who have recently come to see the break in the relationship with Eastern Europe more regretfully and critically,” said Astrid Lorenz, a professor for political science from Leipzig University, in an interview with tagesschau.de “This is interesting because for a long time, people looked mostly toward the West and measured themselves against Western values, policies and affluence.”

Lorenz speaks of a “changed perception of identity” which is also reflected in the call to end sanctions against Russia. “All over central and eastern Europe, a new self-confidence has evolved over the past few years against the EU that is seen as being dominated by the West. In eastern Germany, this manifests in a similar fashion in a rebellion against federal politics.”

Ironically, federal politics in Germany is led by the most prominent east German of all: Angela Merkel lived the first half of her life in the GDR but has very little sympathy for Vladimir Putin and his repressive regime. Today, Merkel is so disliked in large parts of eastern Germany, mainly but not only because of her policy on refugees in 2015/16, that local Christian Democrats do not want the chancellor to speak at any of their election rallies.

Merkel has been careful not to comment on that. Nor has she criticized eastern German leaders for their sanctions initiative. Still, Michael Kretschmer and his colleagues are treading between Merkel and Putin.