Poland won’t exactly be getting the “Fort Trump” it wanted. But NATO’s robust force posture in the East, like Russia’s, still risks being misinterpreted. 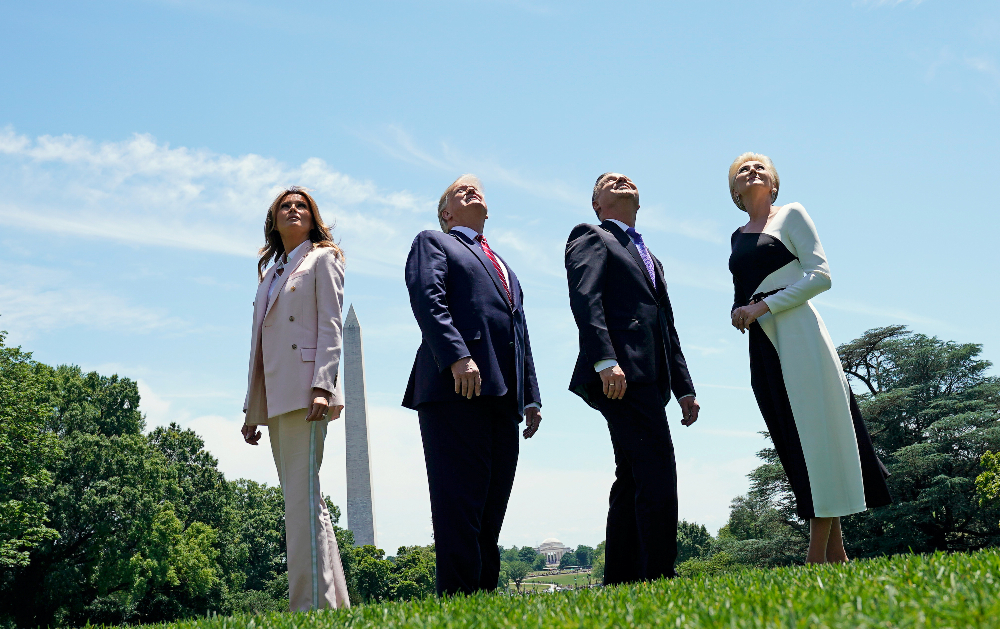 On June 12, the Polish government finally secured its long-sought after joint declaration with Washington on enhancing the US military presence in Poland. As part of the intensive lobbying process leading up to the declaration, Polish President Andrzej Duda had even jokingly offered to name the prospective installation “Fort Trump”. Predictably, the name stuck. But what will this new deployment actually amount to—and how will it affect deterrence, NATO’s Eastern Flank and wider relations with Russia?

Warsaw had initially aimed for the permanent deployment of a US armored division (about 15,000 troops)—and even promised a significant financial contribution (up to $2 billion) to secure it. Over the course of negotiations, however, it became clear that Washington was not ready to meet these expectations. The final declaration instead foresees the deployment of 1,000 additional US troops, the establishment of several combat training centers, and the upgrade of the existing Mission Command Element in Poznan to a US Division Headquarters. In addition, the US will establish special operations capabilities and build-up a squadron of armed MQ-9 Reaper drones.

The Polish government has, obviously, been keen to play up the significance of this deployment, in part because the display of US support and Poland’s status as an indispensable ally helps to mitigate the criticism within the EU of its domestic policies. During the lobbying process, President Andrzej Duda claimed that the US presence would “guarantee (…) security and defense of our part of Europe that is the free world”. Most Western observers have also welcomed the decision to deploy, as it will supposedly strengthen deterrence on NATO’s eastern flank, where the alliance has been steadily increasing its military presence and readiness since Russia’s annexation of Crimea.

The 2014 Wales Summit created the Very High Readiness Joint Task Force (VJTF), comprised of up to 5,000 troops ready for deployment within 48 to 72 hours, and increased the size of the NATO response force from 25,000 to 40,000 personnel. 2014 also saw the US launch what is now known as the European Deterrence Initiative, which established a rotational Armored Brigade Combat Team of approximately 3,500 troops in Western Poland, plus 80-90 tanks and hundreds of other vehicles. It is complemented by a combat aviation brigade, mostly based in Germany.

Over the last five years, the budget of the initiative has increased six-fold. Since 2017, the largest part  has been reserved for the pre-positioning of additional equipment that would facilitate the deployment of division-sized forces into the regional theater in case of military conflict. NATO has also increased the number of its military exercises in the region and, at the Warsaw Summit in 2016, established an enhanced forward presence (eFP) of around 4,000 (multinational) troops in the Baltic states and Poland.

A Tripwire for Russia

Nevertheless, despite these measures, Russia continues to enjoy overwhelming military dominance in the Baltics—as it has for decades—and the current level of NATO reinforcements will not change that. Hence, within NATO there is a growing consensus that the alliance cannot practice “deterrence by denial,” which would require deploying sufficient local military forces to defeat a possible invasion, without being caught in a security dilemma. The issue is that any force sufficiently large to achieve denial would present an intolerable threat to Russia and be misinterpreted as an offensive posture. The obvious gap between the initial expectations of the Polish government and the final US commitment suggests that some people in the Pentagon are aware of such risks.

Tripwire deterrence works on a different principle and does not require regional military superiority: This is deterrence by punishment. The tripwire would not stop a Russian offensive; rather, it ensures that if Moscow ever decided to invade the Baltic states, it would need to engage the forces of different NATO member states directly. Although these forces would be easily defeated, the casualties they incurred would trigger a reaction by the entire alliance, which has global superiority in conventional forces. The tripwire is thus seen to deter. The prospect of the unacceptable damage that would stem from an alliance-wide response, driven by the states that bore the brunt of the casualties, should discourage Moscow from pursuing any such aggression.

The drawback of both deterrence strategies is that they are only appropriate if an adversary indeed plans to attack. After all, the value of successful deterrence is that it prevents military action by changing the state of mind of a potential aggressor. Capabilities alone, though, do not deter. Their deployment needs to be adjusted to the interests and motives of the target state, and they must be accompanied by clear and unambiguous communication efforts. Hence, if an adversary’s political intent is misinterpreted, signals meant for deterrence can instead provoke a vicious circle of increasing insecurity and new deployments. Indeed, in the last five years both NATO and Russia have adopted increasingly robust mutual deterrence postures, which are inherently unstable because offensive and defense postures are increasingly difficult to distinguish from each other.

A Lack of Trust

Despite all the rhetoric of deterrence (of whichever kind), harder questions are rarely asked: Why would Russia attack the Baltic states with conventional forces or try to test NATO’s credibility on the Eastern flank? Is the stationing of more troops on the ground as a tripwire an adequate response to hazardous incidents between warships and jets on and over the Baltic sea? And what about Russia’s own motivation for military reinforcements? Why does Moscow permanently deploy short-range Iskander-M ballistic missiles in Kaliningrad and strengthen its anti-access and area denial (A2/AD) capabilities to limit NATO’s ability to freely operate within the region? Common wisdom has it that the intentions for this kind of behavior are ultimately unknowable and that one should thus prepare for any possible contingency.

However, just because an opponent’s intentions are difficult to comprehend does not mean that one cannot come to informed and reasonable judgements about them. In truth, Russia’s force posture seems to be driven by an almost neurotic sense of insecurity, stemming from both existing and upcoming NATO ballistic missile defense infrastructure and the vulnerable status of Kaliningrad. In addition, due to its overall conventional inferiority, Russia seems to practice ambiguity and even nuclear signaling on purpose as a deterrence strategy.

The real problem is that Russia’s actions in Ukraine, in combination with military snap exercises and its malign efforts in cyber and information domains, have significantly—and understandably—increased the level of distrust in its relations with NATO. Hence, what might have been perceived as non-threatening before is now looked upon with suspicion within NATO. Under these circumstances, deterrence rhetoric has presented itself as an easy political fallback option, aggravated by the Cold War tradition. In this sense, references to deterrence stabilize the identity of states—whether as friends or foes. Indeed, NATO’s moves to bolster its Eastern flank are mainly aimed at reassurance of intra-alliance solidarity and resolve. The Fort Trump debate is a case in point: Arguably, it does more to strengthen US-Polish bilateral relations than to enhance NATO deterrence towards Russia.

So what can be done to proceed more constructively and reduce the risk of misunderstanding, or even conflict? The best option would clearly be to engage in political dialogue between the parties to address the substantive fears on either side and foster a more constructive relationship. Yet given the overall lack of trust and political disagreements between NATO and Russia, this is highly unlikely.

In the absence of such a political move, however, there are still a number of practical steps that both NATO and Russia could take in order to defuse a potentially escalating situation. Greater military-to-military dialogue and cooperation can play an important role in the absence of major political initiatives.

For example, Russia could agree to give military observers access to newly deployed and modernized units, or provide notification and invite NATO officers to military exercises unregulated by the OSCE’s Vienna Document. Currently, military activities with 9,000 or more troops require notification in advance, whereas exercises with 13,000 or more troops are subject to obligatory observations. Russia often evades these measures by splitting up larger exercises into smaller units with several operational commands and conducting the aforementioned snap exercises, which do not require notification.

Moscow could also reiterate the commitment it made in 1999 to show due restraint with regard to conventional deployments in the Kaliningrad and Pskov oblasts, both of which directly border NATO territory. Since Russia suspended the implementation of the treaty on conventional armed forces in Europe (CFE) in December 2007 (and withdrew from it altogether in March 2015), no treaty-related on-site inspections have taken place on its territory. Given that the three Baltic states are not members of the CFE, bilateral agreements on Vienna Document-like evaluation visits—such as the one between Russia and Lithuania that was in place until the annexation of Crimea—could be revised or even expanded.

In turn, the alliance could publicly announce that it is willing to uphold the threshold of “substantial combat forces” on the Eastern flank implied by the 1997 NATO-Russia Founding Act and propose to clarify the exact meaning of this term in negotiations with Moscow. At the moment, NATO deployments remain below the threshold, usually understood as troop levels exceeding more than three permanent brigades, but more and more voices are calling for the termination of the Founding Act.

A better alternative is to revive existing arms control instruments to their full extent, which would help to reduce the perceived dangers of surprise attacks and uncertainty about intentions. Without such confidence and trust-building measures, rhetoric about deterrence—and deploying additional forces—risks becoming a self-fulfilling prophecy that might bring about what it is supposed to prevent: real military conflict, where all sides would lose.