Home Beyond the Seas Mission Possible in the Strait of Hormuz

Giving a flat “no” to a naval mission to protect shipping in the Persian Gulf does not solve Germany’s dilemmas. 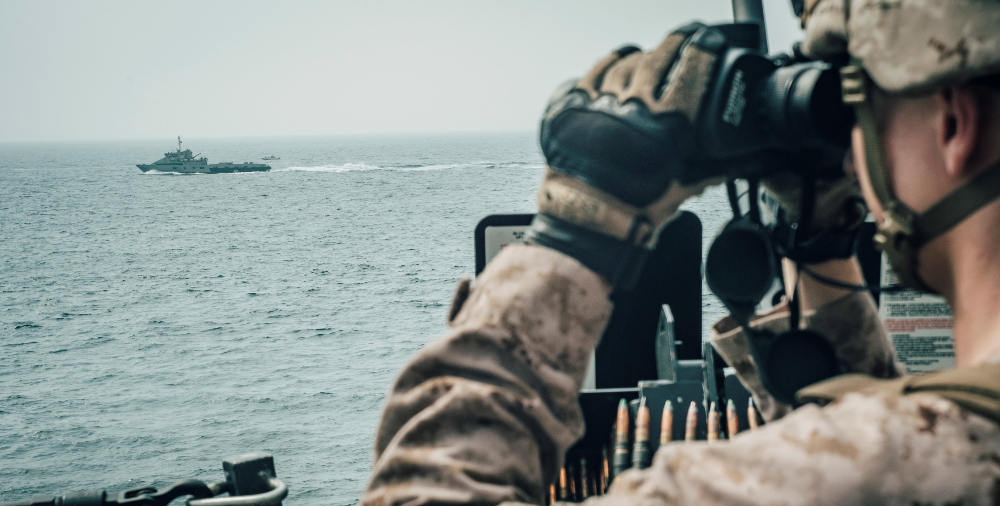 The German government has just decided not to back a US-led mission to protect the shipping lanes in the Persian Gulf. It will now find it harder to work for its interests in the region.

To be sure, de-escalating the conflict between the United States and Iran is the key to lowering risks in the Gulf. But it would help to have an international mission in place that could keep Iran from meddling with the shipping in the Gulf, reliably monitor the movements in the Gulf, offer dispute settlement, and work toward regional stability.

Yet Germany, which is critical of the Trump administration’s strategy of “maximum pressure” on Iran, has opted to withhold support from a Washington-led naval mission in Persian Gulf. Although this dissatisfaction with the US Iran strategy is widely shared in Europe, refusing to participate will weaken Germany’s position vis-à-vis Tehran and Washington, thus playing into the hands of both. Therefore, it is now crucial for Europe to engage in a way that is complementary and not in competition with the US-led effort.

There have been intense debates about the character of a potential maritime mission in the Strait, with questions about its optimal size or duration. European navies have experience with anti-piracy missions, but this time the mission would have to deter attacks from a state actor equipped not only with speedboats but also helicopters, drones, and air defense. To what extent should the mission rely on coercion and deterrence? Participants would also have to credibly threaten retaliation against targets in Iran. What legal basis would the mission have?

By the end of July, two competing initiatives were on the table. The US government circulated a proposal, first in NATO, for participating nations to provide joint surveillance and protect ships running under their own flag. The Americans did not get more than lukewarm support for the initiative. Their allies in Europe and Asia feared being dragged into escalation, in line with Trump’s “maximum pressure” strategy.

After the seizure of a British tanker by Iranian forces on July 20, the outgoing British Foreign Minister Jeremy Hunt proposed a European naval mission, detached from America’s disruptive strategy, with the objective of lowering tensions. There was some support in France and Germany for such a format, but the change of the British government changed the tone as well. The new foreign minister, Dominic Raab, made clear that the mission should not take place without US support. On July 31, US and UK representatives met at a Gulf Maritime Security Conference in Bahrain to sound out the options.

It was then that Germany announced that it would not to take part in a US-led mission. The US had made its request for support public, and the German reflexes were not surprising. “Out of the question,” said Nils Schmid, foreign policy spokesperson of the Social Democrats in the Bundestag—the frail SPD, junior partner in Angela Merkel’s governing coalition, does not want to alienate its peace-oriented electoral base.

But this question is not dividing the government. While Merkel’s CDU/CSU had promised to look into the US request, it was never inclined to follow America’s lead into escalation either. The German position remains to opt for strategies of diplomacy and de-escalation, albeit without specifying how that should work and without testing the theory that an international presence on the Gulf might help make these viable. Germany is not alone; other Europeans, notably the French, hold this view as well. But the seemingly reasonable “no” creates unintended consequences that Germany should avoid.

That is dilemma number one: The Europeans cannot cooperate with their strongest ally in a crisis situation that is very relevant for Europe. They do not trust the US government to not escalate tensions—and not utilize the international support for the mission in order to coerce Iran militarily. Europe and the US have been at odds over the right Iran strategy ever since the Americans withdrew from the nuclear agreement in May 2018 and heightened economic pressure against Iran. This division will be present for quite a while, and it will get even deeper now that most Europeans are staying out of the naval mission.

Dilemma number two is that the transatlantic struggle makes Iran happy. It is hard to judge whether Tehran is applying these needling tactics to raise attention, to get compensation for the tougher sanctions, or to deter the US from further escalating the conflict. The attacks could be an indication of a helpless government under pressure, with an economy in free fall. In any case, it will serve the Iranians if the rift between the transatlantic rift becomes deeper. The US president has forgotten this, but it was Western unity that brought Iran to the negotiation table.

What’s more, Germany’s “no” does not punish the US, rather the opposite, which forms dilemma number three. The Trump administration believes it has time on its side to force Iran to the negotiation table, without being drawn into a war. If tensions increase, the US can act without the Europeans.

In fact, Trump wins whether the Europeans participate or not. If international support comes together, it adds legitimacy and lowers the financial burden. If not, America can still protect her own ships. Yes, many will complain about the erosion of American benevolent hegemony, but helping others for free is not part of Trump’s electoral appeal. If Europe abstains from the mission, it will be easier for Trump to snub allies who fail to stand up for their own interests and pressure them to increase defense spending in accordance with their obligations in NATO. Germany will now find it harder to work around the Trump administration when negotiating with Washington about burden-sharing.

At the moment, the possible outcomes of the Gulf crisis do not look desirable for Germany. If the US patrols alone or with the British, this might induce Iran to test the mission’s vigilance. Provocations and misunderstandings could lead to military exchanges—with German ships unprotected. In assessing what has happened in crisis situations, Germany would have to rely on the reporting of others. And uncontrolled escalation and use of force would affect German interests, but there would be few ways it could involve itself in conflict management.

Even if the mission and the sanctions successfully force Iran to the negotiation table, Germany and the EU might no longer be the players they were when the nuclear agreement was crafted back in 2015. It will look bad that Germany opted out and let others do the job.

Instead of giving a flat “no,” Germany should lead the debate about how the Europeans could stage their own mission with a friendlier face and more elements than patrolling. Admittedly, such duplication might require a lot of energy for coordination and add the burden of sorting out who does what and when. Running two separate missions would also deprive European navies of the support they could receive when cooperating with the Americans, such as in reconnaissance or re-fueling. Nevertheless, a European mission to secure the Persian Gulf could bring in elements that are complementary to the US-UK mission. Germany should work in this direction.

Monitoring will be key, to make sure that Iranian activities against German ships cannot go undetected. Germany, France, the UK, and Belgium could bring the question of an international monitoring mission to the UN Security Council. Even without producing a UN mandate for a EU mission, such a debate might pave the way for a wider internationalization of crisis management.

Moreover, Berlin could turn to the EU to set up a framework in which the regional partners and Iran as well as the UK and the US would be tied in. Consultation among the littoral states of the Persian Gulf already exists, but a new format could accompany the growing international presence there. Its objective should be to design confidence-building measures, such as consultation and clearing mechanisms, and produce schedules for on-site visits or overflights. This would make a mission conducive to the goal of de-escalation. The EU has hosted negotiations about the nuclear agreement, so it is a natural player here. If the UK and the EU can be tied into that mission package, it will also show how close London and the continent still are.