EU leaders have wrapped up talks on Brexit and migration at a summit in Salzburg. They’d hoped to make progress, but they left with little to show for on both fronts. 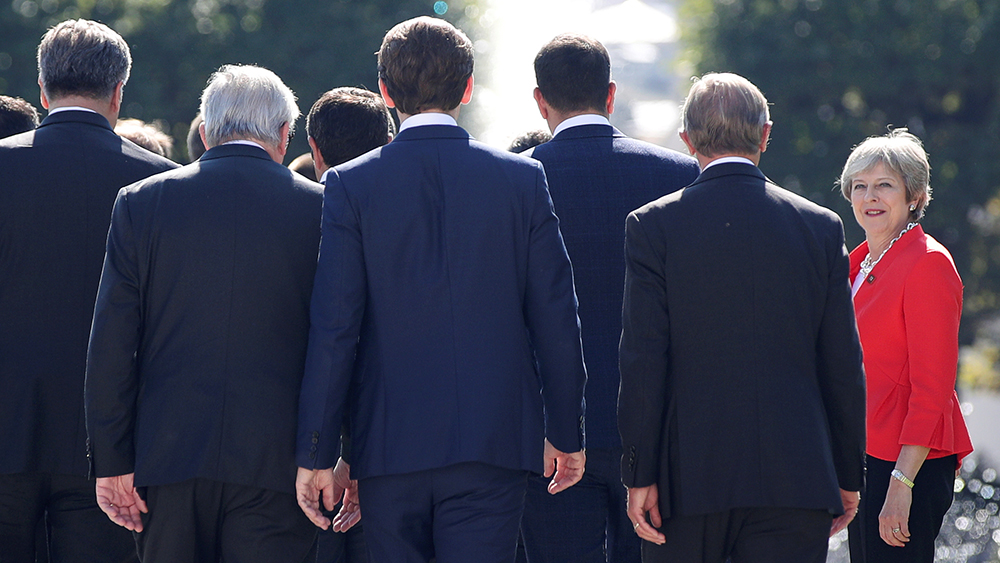 Watching EU leaders shuffle uncertainly around the Mirabell gardens in Salzburg, cameras clicking and whirring from the sidelines, I thought of when the pretty park—and indeed most of the city—attracted attention in 1964. The cast and crew took up residence to film “The Sound of Music,” a Hollywood musical about a singing family, a sinister duchess, and a young post boy who—spoiler alert—joins the Hitler Youth.

If they ever make a musical out of Brexit, it’s unlikely that, in the words of one Sound of Music tune, Salzburg will count among EU leaders’ favorite things.

With Brexit looming large, leaders’ hopes were again raised by the British spin machine that London might have something to move talks beyond the departure lounge. But hopes of entering a new space, to discuss a future relationship between Britain and the European Union, were once again dashed.

British Prime Minister Theresa May had everyone’s attention at dinner on Wednesday evening. With half a year to go until a disorderly departure from the EU, would May move? And would the EU shift in return, as senior officials had signaled before the meeting? No and no.

In the words of one dinner attendee, May “effectively read out an op-ed” she had written for that morning’s Die Welt newspaper. “To come to a successful conclusion, just as the UK has evolved its position, the EU will need to do the same,” she wrote, and said.

Everyone besides Britain views the UK’s position as wanting to have its cake and eat it. But they are waiting for London to put forward proposals that would make such cake-eating politically or legally possible for the EU27. Thus, the response of Donald Tusk, president of the European Council, to May’s after-dinner address was short and blunt: “It won’t work.”

Talks on what happens after March 29 next year are stalled because London has yet to square the circle on the border that divides the Republic of Ireland and Northern Ireland. In six months’ time this will be an outer EU border and all such borders—particularly those which are also a customs border, as Britain wants—require checks and infrastructure.

This is unacceptable to Dublin and many in Northern Ireland who thought borders belonged in the bad old days of the province. The old border infrastructure from the Troubles was dismantled, never to return, after the 1998 peace agreement. Last December Britain agreed that Brexit must reflect and respect this when the UK departs the EU and the customs union.

Brussels put forward its proposal for turning this political aspiration into legal reality: minimize controls on the island of Ireland by keeping the province inside the EU customs union. Any checks on people or goods entering and leaving could then take place between Ireland and Great Britain, with a new border effectively in the Irish Sea.

But London views this as unacceptable: it would create different legal regimes within the UK—and Belfast politicians loyal to the crown fear this would separate them from the mainland. Their reservations carry weight because May depends on their parliamentary support in Westminster.

But if the EU’s legal proposal is unacceptable, what is the UK’s alternative? Salzburg could have been the moment when the prime minister presented even an outline. But she didn’t.

For the Irish, Brexit is not a technicality but, in the words of foreign minister Simon Coveney this week, a “lose-lose-lose situation.” The best Dublin hopes for on Brexit is a damage-limitation deal. Open borders in Ireland will keep people and trade moving. But Irish trucks having to exit and re-enter the EU on their way to mainland Europe could be disastrous—in particular for fresh food exporters.

For Dublin, the so-called Brexit backstop—no border on the island of Ireland—is as non-negotiable in Brexit talks as the 1998 peace agreement, the result of years of complicated talks backed by Dublin, London, but also Brussels. Irish Prime Minister Leo Varadkar said that all EU leaders he had spoken to gave him their “absolute support in standing behind Ireland,”and that the only acceptable EU agreement on Brexit was one that worked for Ireland. “I am leaving here very reassured,” he said.

With the clock running down to “finalize and formalize” a still non-existent Brexit deal, EU leaders will come together again next month for a moment of truth meeting—and possibly for an emergency meeting in November, in case more truth is needed.

Will the EU27 hold together in the weeks ahead? Hungarian leader Viktor Orbán suggested in Salzburg that a group of EU leaders were seeking to “punish” the UK.  But in their closed-door talks, EU officials said, Orbán had nothing to say, not even when officials from Poland, a close ally of the Hungarian leader, proposed greater flexibility in the mandate for EU Brexit negotiators.

After a “frank bilateral” with Tusk, the British prime minister left Salzburg. The remaining EU27 leaders stayed to discuss the political declaration on their future relationship with the UK. That is supposed to accompany the legally binding Withdrawal Agreement but is also suspended in limbo.

Again, leaders reiterated that existing British proposals could not provide the basis of such a relationship. May has proposed a free trade agreement between her country and the EU, but wants to exclude services. EU leaders, with thinning patience, insist the internal market is not a cherry-picking farm: it’s all or nothing.

For what felt like the 1000th time since the 2016 Brexit vote, Chancellor Angela Merkel said: “We were all unified today that there can be no compromises on the internal market.” French president Emmanuel Macron describes such thinking as “unacceptable” and called on his EU colleagues to increase pressure on London in the coming weeks. Echoing growing voices in Britain, Maltese leader Joseph Muscat called for a second referendum in the UK—but other EU leaders declined to follow suit.

The EU circus left Salzburg with leaders calling for compromise with London. Even the Irish—who have the most to lose—said they were open to creative thinking on “language and detail” of any agreement. But this is difficult, they say, given the British have presented nothing to work on.

The lack of progress on Brexit couldn’t hide a significant shift on the EU’s other major headache: a long-term political answer to the emotive migration question.

Tusk said there was a “sharp determination” to expand the EU’s border and coast guard Frontex. He said most EU leaders want to press on with plans to create a standing corps of 10,000 border guards—amid some concerns over national sovereignty.

After the pre-summer drama on migration, pushed by German domestic politics, EU leaders transferred their hopes of “de-dramatizing” Brexit onto the refugee question.

Since 2015, EU member states have been divided on whether they should be obliged to share the continent’s refugee burden. In a bid to end the deadlock, European Commission President Jean-Claude Juncker proposed a new push for “flexibility solidarity.” Describing it as “a proposal I don’t even like myself,” he suggested countries that refuse to accept asylum seekers, such as those in central Europe, should be obliged to contribute on other—chiefly financial—fronts.

President Macron warned in his post-summit press conference that countries that refuse to contribute more to Schengen or other solidarity measures will be edged out of the common travel area. “Countries that don’t want more Europe will no longer touch structural funds,” he said.

Meanwhile EU leaders have pressed on with plans to push offshore the refugee issue, returning people rescued at sea to Egypt and other non-EU countries.

With the migration issue flaring up again in Germany before state elections in the fall, Chancellor Merkel is happy not to push for big changes at the EU level. Above all the German leader knows that, after leading the moral charge on refugees three years ago, such a migration compromise now is less music to her ears than the sound of a political climb-down.