German public opinion on foreign affairs hasn’t changed dramatically during the COVID-19 pandemic. But the trends point to a weakening commitment to both European integration and the transatlantic alliance. 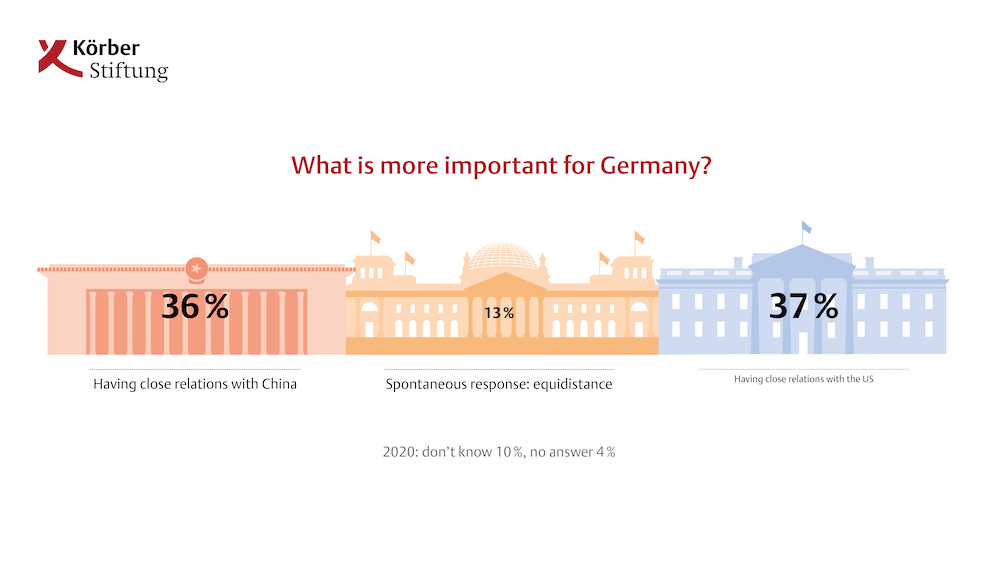 The COVID-19 pandemic has accelerated many of the trends and dynamics underlying recent geopolitical shifts, a new poll conducted by Koerber Stiftung for a special edition of The Berlin Pulse has found. In fact, from a German point of view, the coronavirus crisis has deepened major cracks in each of the three pillars that have underpinned Berlin’s foreign policy almost since World War II: European integration, the transatlantic alliance, and the export-driven economic model.

Each pillar depends on a rules-based order that is increasingly under threat. Recognizing this, Germany has gone to great lengths to promote a renewed commitment to international cooperation: from new initiatives in the UN Security Council, where the country took up its seat as a non-permanent member in January 2019, to the launch of the Alliance for Multilateralism, Berlin has placed multilateralism front and center of its agenda.

But how are these challenges, and the purported solutions, viewed by the German public, particularly in the context of the pandemic?

First off, Germans continue to feel rather comfortable in a deeply interconnected world. A majority of them believe that globalization has benefited their country (59 percent) and them personally (52 percent, compared to 47 and 49 percent, respectively, in the United States, as data gathered by the Pew Research Center shows). In a similar vein, Germans remain staunch supporters of international cooperation: 89 percent favor cooperating with other countries to solve global challenges (there’s been a slight decrease from 96 percent in 2019). When it comes to international challenges, clearly Germans do not like to go it alone.

However, there are limits to the support for global interconnectedness: a strong majority of 85 percent would like to see the production of essential goods and critical infrastructure like 5G technology returned to German soil, even at the risk of higher costs.

So how do these preferences relate to their views on European integration, the transatlantic partnership, and relations with China?

Conflicted on Brussels, Disillusioned with Washington

On Europe, Germans appear rather conflicted: A plurality of 38 percent say that their view of the EU has deteriorated amid the COVID-19 crisis, compared to 33 percent whose view has improved. While nearly three quarters agree that, given its status as a relatively wealthy country, Germany should contribute more than other countries toward solving global problems, it is not clear how this would pan out in Europe: a majority of 59 percent comes down against so-called “coronabonds”, among the most controversial topics over recent weeks.

Support for European integration becomes less ambiguous where tangible benefits are at stake: for instance, an emphatic majority of 85 percent favors a return to the Schengen Agreement, with no border checks among participating states, once the virus is defeated.

German attitudes toward the transatlantic relationship have taken a significant dive. While skepticism predates the pandemic, the Trump administration’s response to the pandemic has clearly accelerated a feeling of estrangement on the German side: 73 percent of Germans say that their opinion of the United States has deteriorated—more than double the number of respondents who feel the same way toward China. And despite the close security cooperation between Washington and Berlin, merely 10 percent of Germans consider the US their closest partner in foreign policy, compared to 19 percent in September 2019.

US out, China in?

So out with the US, in with China? Not quite: Yes, the fact that the public is leaning toward a position of equidistance between Washington and Beijing should worry policy-makers. However, this is not to say that Germans are uncritical toward the People’s Republic. Over 70 percent believe that the Chinese government could have mitigated the pandemic by being more transparent in its handling of the coronavirus outbreak. Neither do Chinese propaganda efforts appear to resonate with many Germans. In contrast to Serbian President Aleksandar Vučić, who in March declared that, given a lack of European solidarity, he was putting all his trust in Beijing, 87 percent of Germans believe that the EU is contributing more to the fight against the pandemic than China.

So, what does all of this mean for the future of German foreign policy? The benefits of EU membership remain popular. However, the results suggest that the pandemic’s net effect on the EU’s image among Germans is negative. Looking west, the Atlantic seems wider than ever. Data from previous surveys suggest that German perceptions of the US closely correlate with their perceptions of the incumbent president and may thus change again. However, the growing gap between public opinion and official German foreign policy provides openings some parties are willing to try and exploit. Some in Germany’s center-left Social Democrats (SPD), Chancellor Angela Merkel’s coalition partner, recently advocated the removal of US nuclear weapons stored on German soil in the context of the NATO’s nuclear sharing scheme—a policy that is essential to Germany’s role within the alliance. This may just be a taster of similar debates coming up.

And China? A number of German policymakers have repeatedly warned that, wherever democratic states retreat from the international stage, authoritarian states will be quick to fill the gaps. In terms of public opinion, China appears to be on the cusp of filling the vacuum resulting from the waning of US popularity. As experts and politicians alike predict that Germany eventually will be forced to pick a side, Beijing’s growing popularity will undoubtedly complicate such a decision.