Huge relief for Germany’s coalition parties: the AfD did not come first in Saxony or Brandenburg. Three conclusions from Sunday’s state elections. 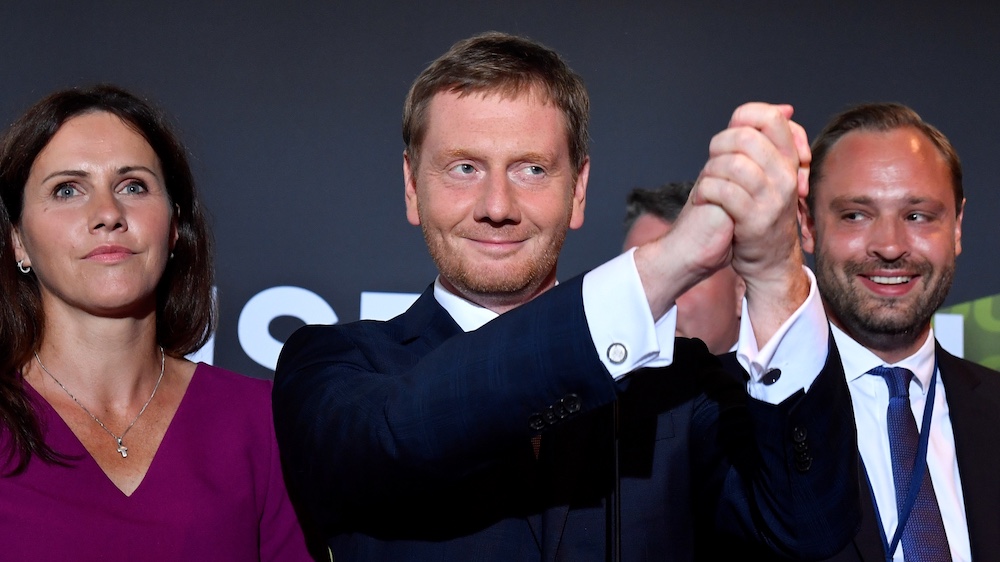 Michael Kretschmer is the day’s hero. Deeply exhausted, Saxony’s state premier blinks under the harsh light of the television cameras. “The most important message of this day is: friendly Saxony has won,” he says among huge applause from his fellow Christian Democrats.

The first exit polls of Saxony’s state elections on September 1 had just been published. And while the xenophobic, revisionist, and populist Alternative für Deutschland (AfD) was able to nearly triple its results to 27.5 percent (from 9.7 percent in 2014), it didn’t come in first.

Kretschmer’s CDU won 32.1 percent, by far the worst result in 30 years of governing Saxony. Even so, Angela Merkel’s party continues to be the strongest party, and Kretschmer will continue as state premier if he can put together a workable coalition with the Greens. This time at least, the AfD will not make it into power.

This is Kretschmer’s personal victory. Nobody here has ever campaigned as hard as this 44-year-old engineer from the Eastern city of Görlitz, who spent the last two months crisscrossing his state, shaking hands, grilling sausages, and talking to absolutely everybody. Not for the last 20 years, a pollster said on Sunday night, did any of the Saxony premiers achieve as high a personal recognition score as Kretschmer.

In neighboring Brandenburg, which also held state elections on September 1, the picture is similar. Here, the race was even tighter, but in the end, the incumbent prime minister Dietmar Woidke managed to squeeze into first—26.2 percent for his Social Democrats versus 23.5 percent for the AfD. Coalition talks will likely be even more difficult than in Saxony, but the AfD was kept at bay.

Three conclusions stand out from these crucial state elections:

The first one is paradoxical: Kretschmer’s and Woidke’s narrow victories will strengthen their respective parties in Berlin and help to stabilize Merkel’s coalition government. At the federal level, both Christian and Social Democrats are profoundly relieved; they have gained a bit of time to turn things around in Berlin. Yet neither of them did much to help Kretschmer or Woidke win their elections.

On the contrary: Chancellor Angela Merkel is so intensely disliked by many voters in the East for her refugee policy in 2015 that local Christian Democrats didn’t even want her to show up for the election campaign. Merkel’s successor at the helm of the CDU, Annegret Kramp-Karrenbauer, is struggling with her leadership role. And the SPD, which has been hit by ever more catastrophic election results, currently doesn’t even have a leader.

The second lesson is a pessimistic one: thirty years after the fall of the Berlin Wall, the AfD is deepening the split between East and West. The pollsters infratest dimap found that in Saxony, 66 percent believe that East Germans are being treated as second-class citizens. Among AfD voters, that share goes up to 78 percent.

During the election campaign, the AfD not only played on the resentment in the former East Germany, they stirred and stoked it. Its message has played particularly well in regions which have seen a massive exodus of higher-skilled people toward the West. The result is a deep mistrust of the country’s mostly West German elites and democratic institutions which will poison German society for a long time to come.

Yet the AfD’s success as the Easterners’ party—and this is the third conclusion—could prove a mixed blessing for the party. In Saxony and in Brandenburg, the party’s leading candidates belong to the far-right wing of the party, which is radically anti-foreigner and anti-establishment and unafraid of links with neo-Nazi groups.

Their strong showing in Sunday’s elections will give them sway over the party’s future direction. But what worked well in Saxony and Brandenburg may turn out to be a liability for elections in western Germany, where the party’s base is ultra-conservative rather than far-right. Also, most West Germans find the anti-Western sentiment that the AfD fueled in the East hard to stomach.

Shooting Itself in the Foot

Keep in mind, finally, that the numbers are firmly on western Germany’s side—North Rhine-Westphalia alone has far more inhabitants than all the East German Länder together—and it becomes clear that with its turn toward the east, the AfD may be shooting itself in the foot.

Autumn has only just started, and Germany still has one more regional election scheduled in the east. Thuringia will go to the polls on October 27. But it’s a slightly smaller state and, according to the latest polls, unlikely to give the AfD the big victory it was hoping for.

So what Germany has now, is a reprieve: for Merkel’s government in Berlin, for the political mainstream, and for the business community which feared that investors would pull out after an AfD victory. Right-wing populism is dangerously high and still rising—but time is not necessarily on its side. “We now have five years,” Kretschmer said—the next state elections are scheduled for 2024. “Time to also speak to those whom we have not yet been able to reach.”