Angela Merkel has said her government will look at ways to achieving a carbon neutral Germany. Is this the return of the “Climate Chancellor”? 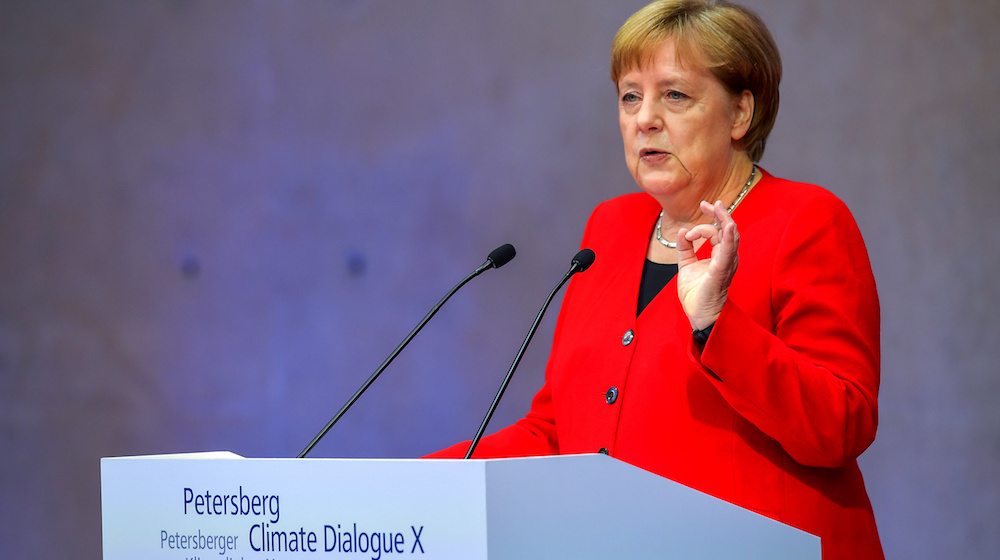 The Petersberg Climate Dialogue is one of those annual climate conferences one doesn’t expect much from. Thirty-five countries get together and dive into the technical nitty-gritty of international climate policy. Most journalists don’t have the patience or interest to follow the minutiae.

This year, however, Angela Merkel said something interesting at the conference. For the first time she brought up the idea of achieving “net zero” greenhouse emissions by 2050: “The discussion shouldn’t be whether we can reach it, but how we can achieve it.”

The term “net zero” doesn’t mean we would have to completely give up burning fossil fuels by then—but we would have to offset the remaining emissions via reforestation or carbon sequestration projects by which CO2 is captured from the air and stored underground. This was the first time that Merkel had clearly expressed that she was in tune with French President Emmanuel Macron’s plan for the European Union to achieve “net zero” by 2050. Until recently, she had been dithering with the vague target of “80-95 percent net reduction” in emissions by mid-century. For those frustrated with Germany’s sluggish progress on climate policy, this sounds like progress.

The latest outburst of climate ambition also tells us that the Fridays for Future demonstrations are having an impact. Merkel openly said she felt the pressure of thousands of children skipping school to protest climate change once a week.

Cynics would say that Merkel is just surfing the Zeitgeist as she always has. Who can forget her sudden U-turn on nuclear power following the Fukushima accident in 2011 when she impulsively decided to shut down all reactors in Germany by 2022, even faster than the preceding SPD-Green government had planned to do? That very decision made recent negotiations to phase out climate-ravaging brown coal plants even tougher: shutting down both nuclear and coal at more or less the same time is a huge challenge.

The imperfect plan requires increased imports of Russian natural gas and even faster expansion of wind farms, which come with their own host of problems, including protests from local residents. The painful truth is that Germany’s per head carbon emissions would be lower if the country had waited longer to phase out nuclear. Despite all of these missteps, Merkel does seem determined to leave behind a legacy of climate action when she finally leaves office.

Ruffling Feathers in the CDU

However, this latest expression of green verve is going to ruffle feathers in Merkel’s own party, the Christian Democrats (CDU). While most Germans might welcome Merkel’s attempt to tackle what is probably the single greatest problem facing humanity, the CDU under the new leadership of Annegret Kramp-Karrenbauer appears to be more concerned by the bleeding of votes to the populist AfD to the right.

In the run-up to next week’s European elections, Kramp-Karrenbauer rejected calls for a CO2 tax—echoed by Manfred Weber, the conservatives’ Spitzenkandidat who is in the running to succeed Jean-Claude Juncker as president of the European Commission. Environment Minister Svenja Schulze, a member of the CDU’s coalition partners, the Social Democrats (SPD), had brought up the specter of a new tax as a way of encouraging people to reduce their CO2 emissions.

Kramp-Karrenbauer warned against Germany “going it alone” and stressed that a European solution was needed. Any solo national solution—new taxes, regulations—could harm German industry and jobs. Fair enough. And yet, when actual European solutions are proposed, such as, for example, stricter regulations designed to reduce car emissions, Germany usually steps in and makes sure the rules get watered down at the EU level.

The complex reality of international climate policy demands both national  and international solutions. Whining about how Germany is only responsible for 3 percent of global emissions, as those on the right of the spectrum routinely do, doesn’t really absolve a single country. Germany happens to be the most powerful, richest, and most populous country in the EU. Leading by example doesn’t hurt if you want Europe to achieve something as a bloc.

A united net zero policy could give the embattled EU a renewed sense of common purpose—a European version of the Green New Deal that could really contribute to creating a cleaner, safer future for humanity. The continent carries a special historical responsibility. Europe was, after all, the place where people began to burn coal on an industrial scale in the 19th century.

Interestingly, climate change has become a decisive issue for voters. According to a YouGov poll this month, the environment has overtaken migration as the biggest European policy issue for Germans. Political parties are well aware of this. The Greens, SPD, and far-left Linke are aggressively calling for more climate protection in their European election campaigns. Even the CDU/CSU pay lip service to sustainability and renewable energy in their manifesto.

Nobody wants to be on the wrong side of history. Except for the AfD, which is delighted to play the role of climate rebel, now that migration has faded as an issue that can rally voters. The populists have switched their main focus from Islamophobia to shamelessly promoting conspiracy theories about Fridays for Future founder Greta Thunberg and ranting about the “climate cult.”

Merkel is largely unperturbed by the populist noise. During her first term, in 2007, she posed in front of an iceberg to show the effects of global warming. And it was her who successfully corralled reluctant European nations, including the Russian petro-state, to sign up to the 2015 Paris Agreement, which committed its signatories to make efforts to keep the global temperature rise this century well below 2 degrees Celsius.

But recently Merkel has largely been preoccupied with the euro and then refugee crises. Then came the embarrassing “Dieselgate” scandal, which exposed the inherent corruption of automakers, not to mention German hypocrisy on the environment. Merkel and her transport minister Andreas Scheuer did all they could to protect the country’s key industry.

With her new commitment to “net zero,” an overhaul of the business model of selling large petrol-fuelled cars is unavoidable. The German brands keep cranking out CO2-belching SUVs as if there were no tomorrow. If Merkel wishes to leave behind a strong climate protection law as part of her legacy, a serious confrontation with many from her own  party and industry will have to take place.

It will be interesting to see if Merkel, by nature a non-confrontational politician, can summon the stamina to push through her upgraded climate agenda.