Home Beyond the Seas Glitter, Glamor, and Rockets

With boycott campaigns, security threats, and rocket attacks, this week’s Eurovision Song Contest in Israel is proving to be one of the most political in years. 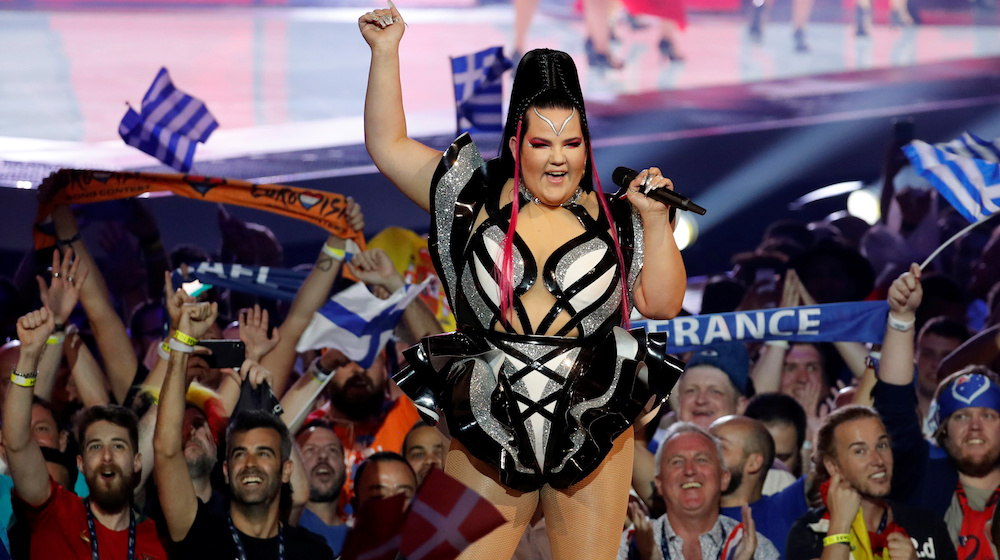 The annual Eurovision Song Contest is chiefly known for its flamboyant costumes and glittering stage sets. But this month the show has been at the center of a very different kind of discussion—its role in the timing and implications of rocket attacks from Gaza.

Each year the contest, which has been musically pitting European countries against each other for over 60 years, is hosted by the winner of the previous year. And when Israeli Netta’s female empowerment pop hit “Toy” won for Israel last year in Portugal, the discussion immediately turned to the political implications.

Netta’s cry of “Next year in Jerusalem!” upon receiving the contest’s trophy didn’t help with the apprehension over the 2019 hosting. Her remark came just a few days before Donald Trump moved the US embassy from Tel Aviv to Jerusalem—a move that was met with protests and violence. Though Netta may have merely been availing of the traditional phrase used at the end of Jewish Passover Seders, her smiling appearance shortly afterwards with controversial Israeli Prime Minister Benjamin Netanyahu didn’t help to depoliticize her win.

In the end, Israel’s public broadcaster was able to resist Netanyahu’s pressure to stage the contest in Jerusalem—by asking the Geneva-based European Broadcasting Union, which organizes the show, to take the unprecedented move of deciding the location itself. Even with the contest being held in Tel Aviv, there were still calls to boycott this year’s contest as part of the BDS movement. BDS campaigners tried to put pressure on national broadcasters to not take part in this year’s contest. But though there were briefly rumors that Ireland’s broadcaster might give in to the pressure, in the end no country pulled out.

Madonna, who is slated to perform as the interval act while votes are being counted on Saturday night, was also subject to boycott pressure. But yesterday she confirmed in a statement that she will perform, saying, “I’ll never stop playing music to suit someone’s political agenda nor will I stop speaking out against violations of human rights wherever in the world they may be.”

Despite her insistence, the organizers say that she has not contacted them and has not signed any contract—leaving open the possibility that she may be a no-show on Saturday.

As preparations for the show steeped up a gear this month, violence broke out in Gaza. The worst nightmare of the organizers seemed to be coming true—the idea that the show could suddenly be interrupted by anti-rocket sirens.

As contestants arrived in Tel Aviv to start rehearsals two weeks ago, Hamas militants in Gaza launched a barrage of rockets into southern Israeli towns. Israel then retaliated by bombing sites in Gaza. The battle lasted three days, killing 23 people in Gaza and four in Israel.

It was among the worst flare-ups in violence in recent years. But unlike other recent incidents, it ended very suddenly with a ceasefire. The Israeli response was uncharacteristically restrained, and some attributed this to government fears of disrupting the contest. In turn, analysts suspect that the Hamas militants chose to launch their attack so close to the contest because they knew the Israeli response would be limited.

Michael Oren, Israel’s deputy prime minister, added to that impression when he tweeted that Hamas would be dealt with after Eurovision.

It’s a reflection of the significance of this annual event, which is now the most-watched live television event in the world other than the soccer World Cup final, which takes place every four years. Attracting around 200 million pairs of eyes, it has more viewers each year than the American Super Bowl, the Oscars, and the State of the Union speech combined.

On Monday, the US embassy in Israel issued a security alert for the contest, urging all Americans in Israel to exercise caution—noting that this year’s contest is coinciding with the one-year anniversary of the embassy’s move to Jerusalem.

“Terrorist groups may choose the anniversary, which coincides with the Eurovision Song Contest in Tel Aviv and Nakba Day, to conduct violent protests or an attack,” said the statement posted on the embassy’s website. Nakba Day is the commemoration by Palestinians of their displacement following the establishment of the state of Israel in 1948.

This year’s contest has been accompanied by the biggest security operation in Eurovision history, with thousands of police deployed. Around 300,000 tourists are expected to come to Tel Aviv this week for the contest, though this number may be far lower than in previous years as prospective visitors have balked at the far-higher-than-normal ticket costs, something the Israelis say has been necessary to pay for all the security.

So far, Eurovision week has progressed without a hitch. Tuesday night’s semi-final, which saw ten countries qualify for Saturday’s final, went relatively smoothly. However, an Israeli webcast of the show was hacked with animated explosions superimposed on the host city.

Why Is Israel in the Eurovision?

Aside from all the geopolitics and controversy, many viewers may have a far more basic question. Given that it’s a country in the Middle East, why is Israel in Eurovision at all?

The reality is that this isn’t necessarily a “European” singing contest but actually a contest for members of the European Broadcasting Union—which is made up of state broadcasters from across Europe, North Africa, and the Middle East. But Israel is the only participant from outside of Europe because its Muslim neighbors in the other two groups have refused to share a stage with it. Morocco has only competed once—in 1980, a year Israel wasn’t participating. (Australia is the only non-EBU-member to participate in the contest, which it has done as a guest since 2015.)

This isn’t the first time Israel has hosted the contest. Netta’s win last year was the fourth time Israel has won the contest. It hosted in 1979 and 1999—both times in Jerusalem. In 1979 it even won while it was hosting, though it declined to host the following year’s contest in 1980, or participate at all, because of budgetary and security concerns.

Both of those previous times the contest passed without incident. Organizers are hoping that this year will be the same.