As the conflict continues to rage on in Syria, there is a growing debate in Germany over the possibility of deporting rejected asylum seekers back to the war-torn country. 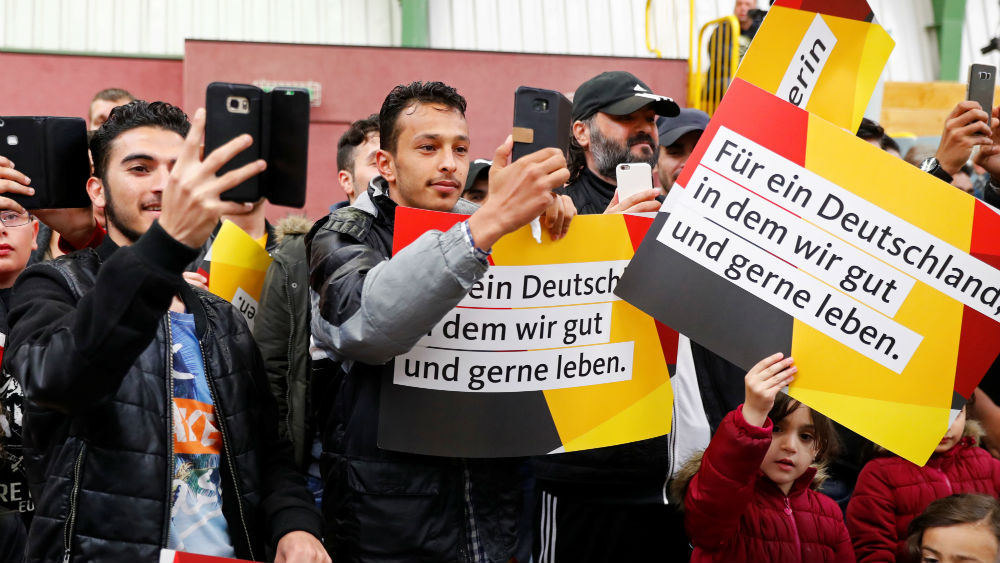 On February 20, German authorities rounded up 14 Afghan men to return to their home country in spite of protests and the very real threats they would face upon their return. These forced returns of rejected asylum seekers had become an issue in Germany’s elections last September: In part due to the growing political influence of the far-right Alternative für Deutschland (AfD), Angela Merkel’s CDU has embraced a harder line on migration, and celebrated a decision made by the German foreign office in August of 2017 to bolster the deportation process.

In fact, with the AfD now Germany’s largest opposition party, these deportations could well expand to target Syrians as well: Of the 890,000-plus asylum seekers who began arriving in Germany in 2015, the majority were from Syria, and Syrians have become symbolic of the entire refugee debate. According to the country’s Federal Office for Migration and Refugees, Germany has received 476,331 Syrian asylum requests since 2015. Of those, 301,201 were granted refugee status.

Before taking any further steps to deport Syrian asylum seekers, the German government will almost certainly have to make the case that those being deported—whether individuals or whole groups—have had their applications for asylum rejected because they are not personally in danger in their home country. A group of AfD lawmakers made headlines earlier this month after they traveled through Syria to prove the country was indeed safe enough to send refugees back.

It is crucial to understand, however, that this is not true: Syrians who return, men in particular, are in deadly danger from both the continued military operations of the Assad regime and the vast scale of destruction the country has experienced. The war in Syria is winding down in most areas but heating up in the remaining rebel enclaves. Even if intense bombardment ceases in the next year or two as planned, it will take much longer to rebuild basic infrastructure, not to mention provide education and jobs.

And Syrian men who fled to avoid being drafted into Assad’s army are at risk as long as the regime is in power. These men opted to leave Syria rather than shoot their own countrymen, and now they are caught between a rock and a hard place—they have become a lightning rod in Europe, with right-wing politicians blaming young, male asylum seekers for increases in crime and sexual violence; having left, however, they are unable to return.

In refugee camps in Lebanon and Turkey and shelters in Berlin, male refugees between 18 and 34 say they fear the regime will arrest them, or even execute them, if they return. Most of the Afghans deported thus far are men, and activists believe Syrian men would be the first deported as well. Belinda Bartolucci, a legal policy adviser with Pro Asyl, a German non-profit that supports refugees and asylum seekers, echoes these concerns: “It is to be feared that in the future Germany will use this concept again for other countries.”

Pro Asyl is making a legal case against the deportations, reminding authorities that asylum seekers have several recourses available even after their applications are rejected. In fact, they say it is nearly impossible to bypass all of those recourses and deport a Syrian asylum seeker. German law states, for example, that a refugee cannot be deported if that would entail an immediate risk to their safety. In early January, a German-born Salafist who is a Turkish national appealed his deportation, saying that he would be tortured by Turkish authorities if he returned– and Germany’s highest court ruled in his favor. This effectively forces the German government to obtain a guarantee from an asylum seeker’s country of origin that they will not be tortured upon arrival, a high hurdle to clear.

The Assad regime will almost certainly not produce such an assurance for Syrian men. Since it is now expected that Bashar al-Assad will remain in power, European nations will need to make this an issue in international fora if they wish to begin reducing the number of rejected asylum seekers remaining in the EU; some Syrian men may even be willing to return on their own if they know they can safely do so.

One option may be through a loophole in Syria’s draft law that allows draft dodgers to return if they have lived abroad for four years and can pay a fine of $4,000. Germany’s interior ministry has recently been trying to lure Syrians to return under their own volition in exchange for a payout of €1,000 for individuals and €3,000 for families in a scheme called Starthilfe, or starting aid. If Germany—or other European states—reworked this idea to target the needs of Syrian men who fled army service, it could be promising.

Syrians who fear oppression at the hands of their own government cannot return, and they cannot be sent back either if their lives would be in danger—not just for their own sake, but for the sake of the values that have defined modern Germany in the post-war era. Those who are willing to return if their safety is secured should be supported, with financial means if necessary; those who would not be safe in their home country must not be forced to return to it.