Of course transparency on NATO’s Eastern flank is important. But until Russia stops its provocations, it will be hard to reduce tensions. 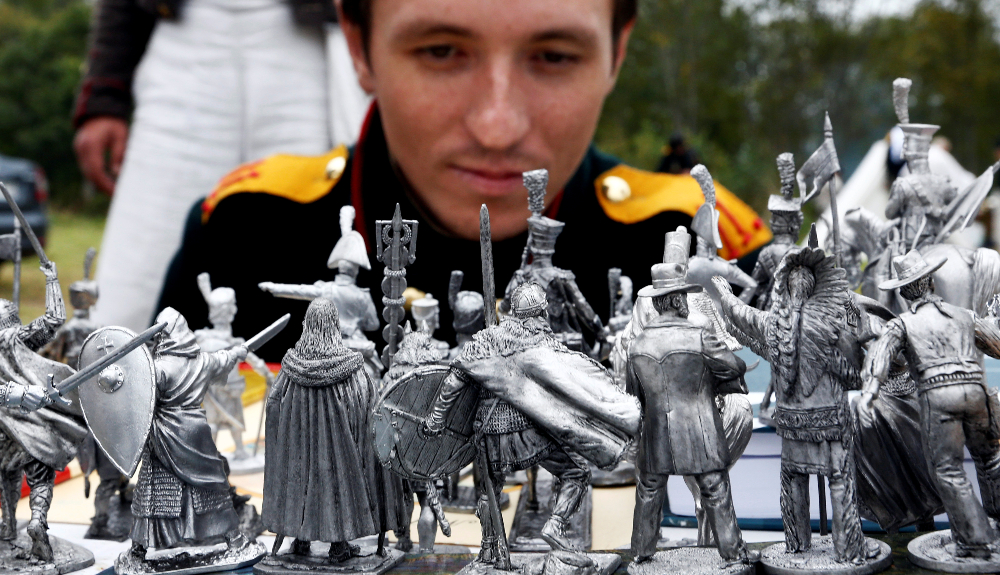 Deterrence, transparency, risk reduction. They have all become buzzwords, especially as Russia’s relations with the West hit an all-time low. Numerous experts have become concerned about a new arms race and its implications for transatlantic security. Alexander Graef, in his recent Berlin Policy Journal article “Getting Deterrence Right on NATO’s Eastern Flank”, sets up a discussion about the right balance between deterrence and transparency. He refers to all three buzzwords, suggesting that “without confidence and trust-building measures, rhetoric about deterrence—and deploying additional forces—risks becoming a self-fulfilling prophecy that might bring about what it is supposed to prevent: real military conflict, where all sides would lose.”

This piece will not concentrate on the importance of deterrence on NATO’s eastern flank nor seek to rebut the suggestion that an increased US presence in Poland might start a vicious circle of increasing insecurity and new deployments. Rather, this article will try to frame the discussion about the role of transparency and risk reduction.

It is true that the current relationship between Russia and NATO (or more broadly the West) is marked by a mounting lack of trust as well as growing risks. Therefore, transparency is often perceived as a silver bullet solution. Yet transparency is not isolated or unconnected from strategy. Since 2014, Russia has decided to instrumentalize risk, treating it as a security policy concept. Russia’s continues to pick and choose which arms control, non-proliferation and disarmament treaties and agreements it complies with. In fact, Russia’s policy of selective violation and non-compliance, as well as its practice of exploiting loopholes in the existing frameworks, significantly increases uncertainty and unpredictability.

The Benefits of Openness

In such circumstances, why does transparency still matter for NATO and the West? For one, when properly implemented, it promotes predictability between competitors, increases the chances to reduce risk, and helps to (re)build mutual trust. Yet transparency should not undermine security, nor hinder NATO from having a credible deterrence and defense posture.

There are three main goals that transparency should contribute to. First, security, which is indivisible. The ultimate task is to eliminate any security grey zones or regions of unequal security. Second, stability, which should be based on reciprocity. Indeed, only balanced final results will maximize incentives for parties to stay in compliance with any arms control, disarmament, or non-proliferation obligations. Thirdly, verification, which in practical terms means the ability to assess compliance. Transparency should increase the possibilities for deterring possible violations.

From an eastern flank perspective, there are three main platforms which should be used to achieve greater, yet measured and reciprocal, transparency: NATO-Russia contacts, the OSCE framework, and finally, bilateral/regional dialogue.

In his piece, Alexander Graef suggests that “the alliance could publicly announce that it is willing to uphold the threshold of “substantial combat forces” on the Eastern flank implied by the 1997 NATO-Russia Founding Act and propose to clarify the exact meaning of this term in negotiations with Moscow.” In fact, such a solution is a non-starter for Allies on NATO’s eastern flank. Not only would it belittle Russia’s political and military violations of the Act, but it would also undermine the concept of equal security among all allies, which is one of the goals transparency should contribute to. Therefore, a return to a discussion about the NATO-Russia Founding Act is counterproductive as this document should be perceived as a Russian “political A2/AD tool” inside NATO.

Instead, one should concentrate on achievable steps. Both the NATO-Russia Council as well as direct military contacts between SACEUR and the Russian Chief of Defense offer valuable instruments to increase predictability and potentially reduce risks. Currently, risk reduction is one of the integral elements of the NATO-Russia Council meetings, which entail reciprocal briefings on NATO and Russian military exercises. At the same time, the meetings and phone calls between SACEUR and the Russian Chief of Defense allow both sides to maintain strategic military-to-military contacts, thus serve increasing predictability. However, from NATO’s perspective a qualitative change in the transparency and risk reduction pillar can only happen when Russia starts to address the most destabilizing elements in its military posture, such as inherently destabilizing snap exercises. Informing NATO about the start of a snap exercise (so-called ‘day one transparency’), for example via the SACEUR-Russian Chief of Defense line of communications, would considerably contribute to practical risk reduction.

Alexander Graef suggests that “Russia could agree to give military observers access to newly deployed and modernized units or provide notification and invite NATO officers to military exercises unregulated by the OSCE’s Vienna Document”. At a first glance, such a solution might seem tempting. Yet, voluntary measures should not distract us from the fact that Russia does not deliver on the obligatory requirements of the Vienna Document, such as inviting observers to exercises with 13,000 troops or more. In fact, since 1990 Russia has never officially organized a military exercise involving more than 13,000 troops in the Vienna Document zone of application. Official or not, this makes no sense—such exercises happen on a regular basis, including near NATO borders.

Therefore, the goal should be to enhance the OSCE framework, which was primarily designed to increase transparency and help reduce military risk, but also to allow participating states to (re)build confidence among them. However, in the last few years the OSCE platform—despite ongoing constructive attempts by the West—has failed to properly tackle the issue of transparency and risk reduction.

First, chapter III of the Vienna Document (“Risk Reduction”) has never been properly tested. In a real life situation, on the eve of the Russian aggression against Ukraine in March 2014, its value proved limited.

Second, Russia, despite some initial interest, did not agree to modernize the Vienna Document. The Polish proposal to amend paragraph 17 of the Vienna Document (‘Co-operation as regards hazardous incidents of a military nature’), currently co-sponsored by more than half of the OSCE participating states, has so far not attracted Russian politico-military attention.

Third, the Structured Dialogue—launched in 2016 to work on the current and future challenges and risks to security in the OSCE area—has produced limited results. This informal platform was designed to tackle the issues of concern that for political reasons could not be effectively addressed in the formal fora (e.g. snap exercises, hybrid warfare). Yet to this point Russia’s engagement in the Structured Dialogue process has been far from constructive.

Finally, the OSCE discussions on military doctrines—a crucial element of reciprocal confidence building and a perfect platform for strategic and technical military to military contacts—has not brought much added value in recent years. In short, the OSCE framework still has untapped potential to make a lasting contribution to transparency and risk reduction.

What is achievable? In a short-term, one could ensure that technical elements for risk reduction are in place. The OSCE Secretariat (Conflict Prevention Center) could organize an exercise during which national points of contact for military incidents would be tested. However, the precondition for any substantial change, including the modernization of the Vienna Document, is a Russia willing to engage constructively.

Graef also advocates agreeing additional bilateral measures between Russia and the West (“bilateral agreements on Vienna Document-like evaluation visits”). In the Baltic Sea region, additional bilateral confidence and security building measures (CSBMs) were agreed upon between Russia and the Baltic States in the late 1990s and at the beginning of the past decade, among them CFE-like information exchanges. The latter were terminated by Russia after it suspended its participation in the CFE Treaty. In addition, in 2001 Russia and Lithuania had agreed to allow for one reciprocal evaluation visit beyond the regular Vienna Document quota to be carried out in the territories of the Kaliningrad Oblast and Lithuania. This provision was cancelled by Russia in April 2014. Currently, only Finland has bilateral agreements with Russia (signed in 2000 and 2002) allowing for one additional evaluation visit per year as well as biannual exchange of naval visits to Finnish bases at Upinniemi or Pansio and Russian bases at Kaliningrad or Kronstadt.

In the current security environment, entering into new bilateral agreements with Russia will be politically and militarily difficult for most of the countries in the Baltic Sea region, but also for e.g. Black Sea littoral states. Nevertheless, both sides should at least start looking into this option as a mid-term to long-term goal. Such an approach should encompass the necessary internal national preparations, including setting the expected objectives as well as conducting the intra-agency brainstorming.

Finally, one should not forget that regional dialogue can also prove to be useful in rebuilding trust. In the recent years in the Baltic Sea region, two working groups, which included among others Russia and NATO, contributed to increasing air safety for both civilian and military aircraft. The work of the ICAO-facilitated Baltic Sea Project Team (2015) as well as Finnish-led Expert Group on Baltic Sea Air Safety (2017) led to a reduction of air incidents in the region. The engagement of the Russian side in the works of both groups confirmed that there is interest on technical and military level to establish additional principles to enhance air safety. The full implementation by Russia of the rules and procedures for air safety and engagement in safe and responsible airmanship will help to potentially replicate the Baltic Sea experience in other regions (e.g. Black Sea, North Sea).

Transparency and risk reduction are certainly important elements in the deteriorating relationship between NATO and Russia. The West should continue to pursue achievable steps, such as OSCE or NATO dialogue and bilateral agreements where possible. But until Russia stops conducting a policy of intentional escalations and provocations to enforce its interests and exercise influence, transparency will never reduce tensions as much as some strategists believe.

The views and opinions expressed here are the author’s own and do not necessarily reflect the official positions of the institution he represents.