On January 22, the SPD reluctantly voted to open formal coalition talks with Chancellor Angela Merkel’s conservatives. The decisive moment was not partly leader Martin Schulz’s speech, but a short and impassioned intervention by Andrea Nahles, the Social Democrats’ leader in the Bundestag. Who is this politician who one day may take on Angela Merkel? 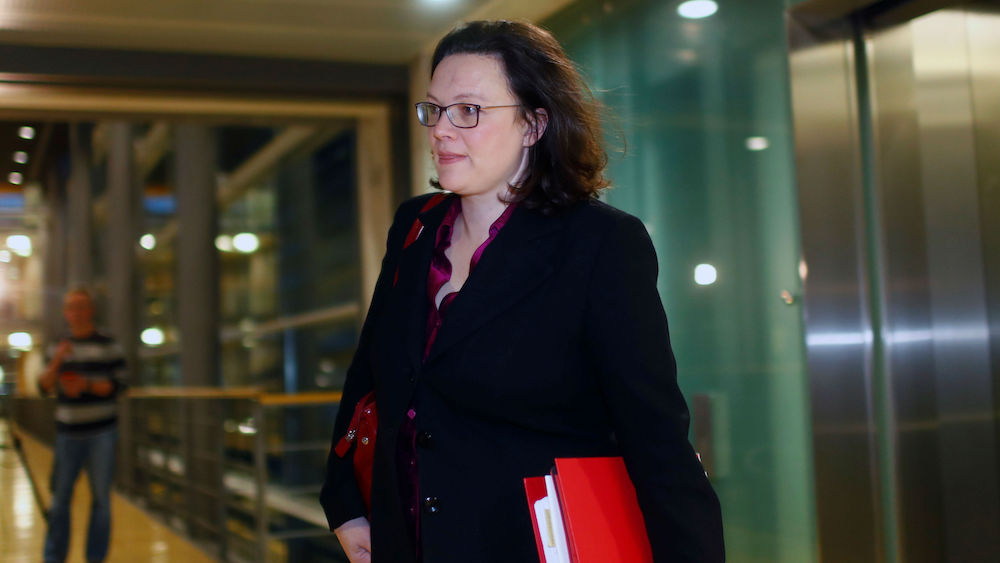 Four months of wrangling over a new government coalition have left Germany’s political establishment badly bruised. Chancellor Angela Merkel has lost much of her authority; for the leader of the Social Democrats, Martin Schulz, it’s been even worse. When coalition negotiations finally began on January 26, the SPD’s ratings in the polls sank to 19 percent, a new record low.

Yet as the deeply divided party struggles to make the best out of several more years as junior partner to Merkel’s conservatives, a new leadership hope has emerged. Andrea Nahles, 47, the leader of the Social Democrats in the Bundestag, looks likely to take over from Schulz sooner rather than later. The next step for this feisty, outspoken career politician could then be a run for chancellor.

In many ways, Nahles is the anti-Merkel. Angela Merkel, daughter of a protestant pastor in Brandenburg, had a career as a physicist in East Germany. Andrea Nahles, a devout Catholic, grew up in the rural Eifel region in the very west of West Germany, studied literature, and spent her entire professional life in politics.

Merkel has said many times that she could never have imagined the fall of the Berlin Wall and a life in the Federal Republic. In contrast, any portrait of Nahles is certain to mention her school yearbook, where at the age of 19 Nahles described her ambitions in life as “house wife or federal chancellor.” As one recent observer wryly mentioned, she has missed out on the first.

Where Merkel, as a latecomer to politics, has always kept a certain distance from her own party, Nahles has spent her entire adult life in the SPD. Just like Gerhard Schröder, the last SPD politician to make it into the chancellery, Nahles built her career in the Jusos (Young Socialists). The SPD’s youth organisation is known as a fierce training ground for any aspiring leader, calling for strategic finesse and ruthlessness as well as networking skills.

In general, the Jusos are more leftist than the SPD, and Nahles, their national leader from 1995 to 1999, used to be highly vocal about social injustice and the need for a wealth tax. Her outspokenness – sometimes earthy, sometimes vulgar, but always loud—earned her praise from then-SPD leader Oskar Lafontaine, who called her “God’s gift to the SPD.” The wider public, however, didn’t like her much. Ever since, Nahles has been hampered by a reputation for being shrill—a handicap she will have to overcome if she really wants to be chancellor one day.

There is no doubt that she has a brilliant strategic mind. In the early 2000s, Nahles was one of the first Social Democrat leaders to recognize how dangerous the new Left Party would become to the SPD. As a member of the top leadership of her party, she vehemently opposed Chancellor Schröder’s social and labor market reforms, and drew up a radical reform plan for health care insurance.

As the years went by and Nahles became first secretary general and then deputy leader of the SPD, she slowly moved toward the political center. From 2013 to 2017 she served as federal minister of labor and social affairs, a hugely difficult portfolio. Her conservative colleagues in Merkel’s cabinet didn’t particularly like her politics—introducing a minimum wage and allowing workers to retire after 45 years on the job – but they came to respect her effectiveness in managing a large public administration. At the same time, Nahles retained her gift for simple and direct language.

Yet her name never came up last year when the SPD was casting around for a candidate to challenge Merkel in the September elections. Instead, Martin Schulz, a former president of the European Parliament, became the Social Democrats’ surprise candidate for chancellor.

Schulz’ start was hugely successful, but all too soon disillusionment set in, leaving the Social Democrats with only 20.5 percent of the vote on September 24, their worst result in over 70 years. Schulz managed to hold on to his post as party leader, but was unable to claim the one office where he could be certain of high visibility over the coming years: party leadership in the Bundestag. It was Nahles who won the post.

Ever since the elections, Schulz has been struggling. Having initially declared that his party would not take part in any new government, he was forced to reverse himself when talks between Merkel’s conservatives, the Greens, and the liberals broke down. This proved very difficult to sell to the SPD’s grass roots, who believe that another four years as junior partner to Merkel will seal the party’s downfall.

No wonder the SPD’s party congress on January 22 was nervously awaited by its leadership. It seemed not at all certain that delegates would support the decision to enter formal coalition talks with Merkel. Much was expected of Schulz’ one-hour speech: This was his great chance to rouse and convince the party base. Failure, he knew, would be laid squarely at his door.

But Schulz was suffering from a bad cold, and his speech was lackluster. It was Andreas Nahles who saved the day, galvanizing the delegates in just six-and-a-half minutes. “I am a member of this party because I want to see great things achieved,” she shouted in a hoarse voice. She wasn’t afraid of new elections, she added, she was afraid of the questions voters would ask if the SPD had to campaign for the very same things that they could have implemented in government. “People are going to say that we’re bananas!”

In the end, 56 percent of delegates approved the coalition talks. Almost single-handedly, Nahles had given Merkel a chance at forming a new government, saved Martin Schulz from having to resign as party leader, and positioned herself as a possible successor. It took six-and-a-half minutes—and the skill of a lifetime in politics.