For Angela Merkel, her fourth coalition government has turned out a hard sell. Meanwhile, her successors have started eying the top spot. 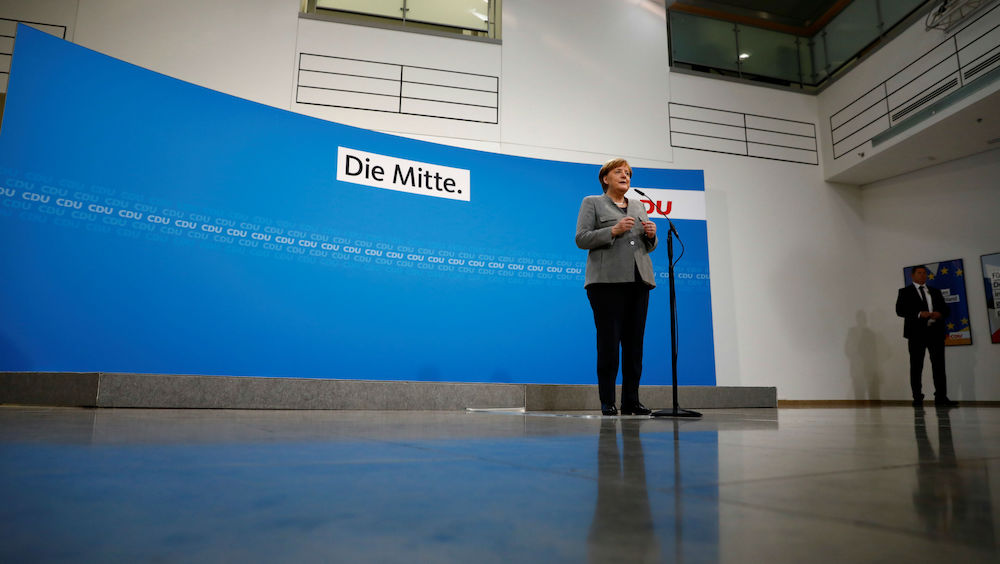 German leader Angela Merkel is the mistress of confidence trick politics. After almost three decades in the game and 18 years as head of her center-right Christian Democratic Union (CDU), she has perfected the art of doing one thing while convincing you she is doing the opposite—or nothing at all. But for how much longer?

When historians start work on the Merkel era, they will flag February 11, 2018 as the moment when Merkel signaled in public the eventual end of her chancellorship—while denying she was doing anything of the sort. Her long ZDF television interview was a masterly Merkel performance, dismissing suggestions she was under pressure to act and insisting she was acting of her own free will. That, of course, is nonsense.

Since last September the acting German leader has all but vanished from view. That she reappeared for a rare television appearance—to insist that rumors of their political demise are greatly exaggerated—merely catalyzed those rumors, and underlined how serious the situation is. She insisted she was not responding to outside pressure, while caving into that pressure at the same time, and said the time had come to include the next generation in her next cabinet.

As is typical with Merkel she tried to sell a policy shift—which she insisted wasn’t happening—as her own, adapting to critics’ calls in private and, in recent days, in public.

Her fourth cabinet would “naturally” have to ensure that “not just over-60s but also younger [politicians] will be considered.” She was always a promoter of young political talent, she insisted with a straight face, despite her youngest CDU minister being 57 years old.

The CDU leader had news for the young pretenders: don’t get your hopes up that Angela Merkel will vanish from the political landscape any time soon. “When someone like me has been chancellor for twelve years, clearly, they won’t be chancellor for another 12 years,” she said.

In case anyone is planning a putsch—unlikely, given the CDU is not a putsch party—she reminded everyone how she consulted widely within her party last year about running for a fourth term. “I asked if it was right and wished for – and [the answer] was affirmative.” Anyone who tries to force a different outcome would, she indicated, be undermining a campaign promise she made to serve a full term, as chancellor and CDU leader. “I belong to the people who keep what was promised,” she said.

The Lady Protests Too Much

The whole appearance could be filed away under the slogan “the lady doth protest too much.” If there is no pressure on her, why was she in a television studio and not at home watching her favorite TV show, “Midsummer Murders”?

And is she still in a position to dictate events and timing? After all, if it’s business as usual why did she move forward her timetable, and agree to reveal her ministerial appointments before a special party conference to vote later this month on the coalition deal?

On Sunday night Merkel did what she always does—performed a U-turn while simultaneously denying it.

The reality is that the German leader has been caught out by hugely negative blowback to a coalition deal she presented last Wednesday with her old coalition partners, the center-left Social Democratic Party (SPD). Whether the coalition actually takes office hinges on a vote of 460,000 SPD members in a postal vote, with the result expected on March 4.

And her coalition partner is in turmoil after leader Martin Schulz announced plans to become foreign minister, contradicting earlier promises that he would keep his party out of government, and himself far from Merkel’s cabinet table.

After two days of outrage he announced his departure from politics and the SPD is now struggling to stabilize itself. But Merkel’s own CDU camp are also furious, with critics accusing her of agreeing to an expansionist €46 billion program for government and handing the SPD key ministries—finance, foreign, and labor—to secure her personal future.

In her television interview Merkel denied that last claim, insisting that she was, of course, acting for the good of a country now 20 weeks without a government. The loss of the finance ministry was “painful,” she conceded, but insisted the coalition agreement was so cleverly worded it would ensure the new minister “cannot do or not do what they want.”

It was her way of dampening expectations that, with Berlin’s coveted finance ministry returning to the SPD, Germany’s EU partners can expect looser German purse strings in the euro reform debate.

The man likely to be her next finance minister, the SPD Hamburg mayor Olaf Scholz, appears to agree with her. While the man from the SPD’s conservative wing will spend more than his predecessor, he said the coalition agreement would retain the balanced budget policy of his predecessor Wolfgang Schäuble. Anyone expecting Germany to engage in checkbook EU policies, he said, could think again.

“With all additional wishes, we have to look closely at what we can afford and what we can’t,” Scholz said.

His assurances are welcome news for Merkel as she battles concerned CDU conservatives, who believe French euro reform plans amount to a European free-for-all investment plan, financed by Berlin.

But few of Merkel’s impatient would-be successors will be fooled by her Sunday evening appearance. It was not an offensive volley, but a defensive, rear-guard action by a leader who is not on her last legs, but definitely in her final act.

And she has raised the curtain herself by reaching out to ambitious would-be successors, breaking her long-standing habit of never revealing her political thinking. Forced to move, under Zugzwang, she has fired the opening shot in the CDU succession race while denying she holds the starting pistol in her hand.

Now all eyes turn to the young Merkel heirs. First out of the traps on Sunday was Jens Spahn. “We’re not in a monarchy where one organizes one’s own succession,” snorted the ambitious 37 year-old conservative. “When the time comes, then candidates will have to assert themselves.”

You may be right, Jens, but unless someone is ready to wield the knife: join the orderly queue behind the assertive Angela Merkel.