At a key party conference in early December, Angela Merkel’s conservative CDU party is poised to select a new leader—a person who has a strong chance of being the country’s next chancellor. It could be Friedrich Merz, out of politics for almost a decade—so who is he, and what does he want? 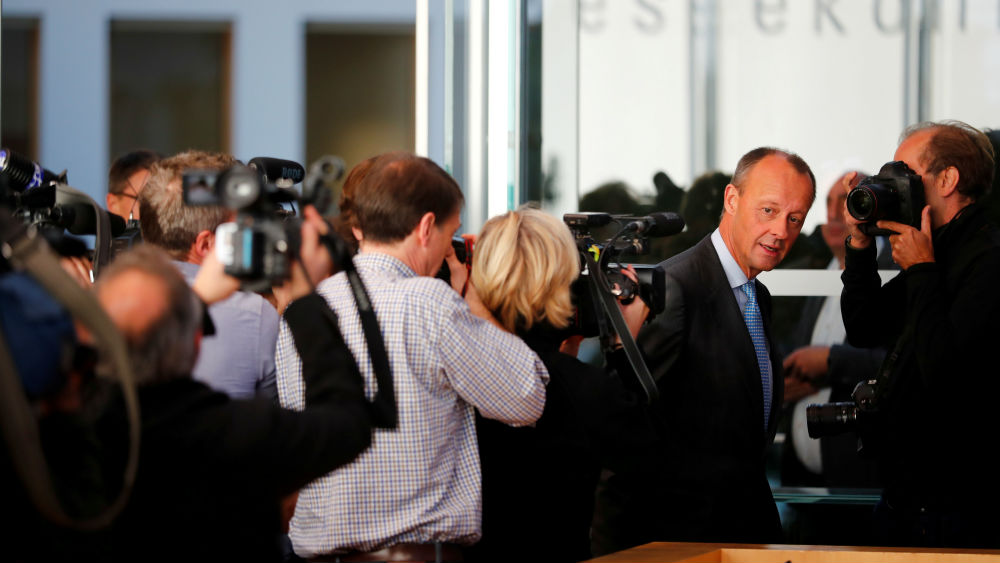 Here’s the legend: in 1979, twelve young conservatives were on a boys-only jolly a few thousand feet above the Andes mountains. Aboard a night flight from Caracas to Santiago de Chile, the ambitious merrymakers, all members of the Junge Union, the even-more-conservative youth organization of the Christian Democratic Union (CDU), were up past bedtime and drinking too much whisky.

As naughty boys like to do, they made a pact: members of the club would not compete against each other for a political position and would never publicly call on another to resign. Whether it was a drunken joke or not, the loyalty of the Andes Pact endured, and the male, white, West German, mainly Catholic members met regularly to reaffirm their political brotherhood—and occasionally increase their numbers. A former CDU parliamentary leader named Friedrich Merz was inducted in 2005.

The Andes Pact, whose existence was first reported by DER SPIEGEL in 2003, has wielded considerable power in Germany: its members became cabinet ministers, state premiers, even presidents—but not a single one ever became chancellor. One by one, each man’s pretensions to the highest office were thwarted by the wily brilliance of a certain Protestant woman from East Germany.

That’s the legend, anyway. It’s as good an explanation as any for why a 63-year-old millionaire consultant who retired from politics nine years ago re-surfaced within minutes of Angela Merkel’s announcement at the end of October that she was stepping down as CDU leader in December. The whisky-drinking boys from the Latin American airplane want what’s theirs, and Merz is their chosen man.

The other explanation is more Shakespearean, or “Old Testament,” if you believe Michael Koss, political scientist at Munich University: “A tooth for a tooth and an eye for an eye,” he says darkly. For Merz, it seems, has a grievance against Merkel.

In 2002, with an election looming, Merz fell victim to an ingenious chess move that CDU chairwoman Merkel hashed out with Edmund Stoiber, then leader of the CDU’s Bavarian sister party, the Christian Social Union (CSU). In exchange for the chancellor candidacy in the election, the aging Bavarian statesman promised Merkel the leadership of the CDU/CSU’s parliamentary group, the office that Merz had held for two and a half years.

Stoiber was duly swept from history by rambunctious Social Democrat Gerhard Schröder, while Merz was relegated to the backbenches without ceremony. Merkel, meanwhile, consolidated her power and united the roles of CDU party leader and CDU/CSU parliamentary leader. Three years later, she won the first of four general elections, and seven years later Merz gave up his seat in parliament. His last notable contribution was a simplified “beermat” tax reform proposal, a classic populist, neo-liberal move (a tag he rejects), which never happened. Apparently all this stuck in Merz’s craw. Now he’s back, Merkel’s Banquo, the ghost of a wronged man suddenly materialized to torment a weary monarch.

“He is really a man on a mission,” says Kai Arzheimer, political scientist at Mainz University. “He always had a grudge against Merkel because he didn’t agree with the whole policy of moving towards the political center, whether it was refugee policy, the minimum wage, or the abolition of nuclear power—all these policies he didn’t like.”

That’s also why, despite being out of politics for nearly a decade, Merz has remained a touchstone for the aging nostalgics in the CDU membership, according to Arzheimer. “I think he’s especially popular with middle-aged men in the party, who have this feeling that they have been sidelined for the last 15 years,” he said. “I wouldn’t call it a conspiracy, but there have always been calls for bringing him back.”

The day of destiny is December 7, at the CDU’s party conference in Hamburg, when 1,001 delegates get to elect the next leader. It’s been a long time since these officials have had such a fateful choice to make, because, given that the CDU remains Germany’s biggest and most successful party, whoever they choose could well take her place in the chancellery after the next election.

Merz’s strongest rival is Annegret Kramp-Karrenbauer, Merkel’s natural heir both in temperament and politics, which only makes the CDU’s choice even more crucial. The German conservatives’ future’ will either be the Merkel way (sober centrism, a careful husbanding of options, leavened with social liberalism) or it will be what Merz himself, true to the Andes Pact, has been styling as a return to the CDU’s “trademark values”: law and order, traditional families, and protecting businesses. Despite his protestations that he would serve Merkel loyally, it seems unlikely that the CDU under his leadership will be able to maintain its already tense relationship with the Social Democrats for very long.

A View to the Right

Although Merz has made overtures to the Greens, praising the party that has surged in the polls and leaving open the possibility of forging a coalition, all signs suggest that Merz’s campaign is, as Koss put it, “about AfD voters only. More specifically, he will make sure to be (or at the very least seem to be) more tough on migration.” In fact, despite his studied insistence that his aim is to keep the CDU as “the party of the center,” Merz recently adopted one of the far-right populist Alternative für Deutschland’s (AfD) favorite tactics: make a statement that undermines a basic pillar of the German state, then row back on it after the inevitable uproar has died down.

That happened in late November, when Merz suggested that the article of the German constitution that guarantees asylum to refugees needed to be re-considered. The AfD accused him of plundering their policies, other CDU figures distanced themselves, and the Social Democrats branded Merz as “Trump light.” Naturally Merz took the remark back the next day, saying that all he meant was that the issue of migration had to be “resolved at the European level.” In other words, German law needed to be in harmony with the rest of the EU.

Merz has made no secret of the fact that he wants to win back CDU voters who have drifted to the AfD in the past five years, and despite insisting that his battles with Merkel have not left any scars, he is not above criticizing the party the CDU has become under her leadership. In an interview with the Deutschlandfunk radio station, he accused his party of having accepted the AfD’s election successes of the past few years “with a shrug.” (That irritated Kramp-Karrenbauer, who called Merz’s remarks “a slap in the face” for all CDU campaigners who had countered the AfD’s “hate speech.”)

But a leaked AfD strategy paper on Merz showed that the far-right aren’t really that worried about him. In fact, and somewhat paradoxically, all the characteristics that make him so attractive to old CDU party members also make him a liability in the fevered minds of the populists. His pro-Europeanism (he was once an MEP and recently criticized the German government for failing to respond to French President Emmanuel Macron’s calls for more European integration), his ties to big business (he is an executive at BlackRock, the biggest asset management company in the world) and his highly successful career as a finance lawyer (he would be the first German chancellor to own a private jet) mean that he can easily be dismissed as another elitist. The attack lines might be different, but Merz will present no less of a target for the AfD than Merkel.