The state elections in Bavaria saw the German Greens enter with a record high result—a strong statement against the anti-migrant campaigns of the established conservatives and the far-right. Does their success provide answers on how to stop populism? 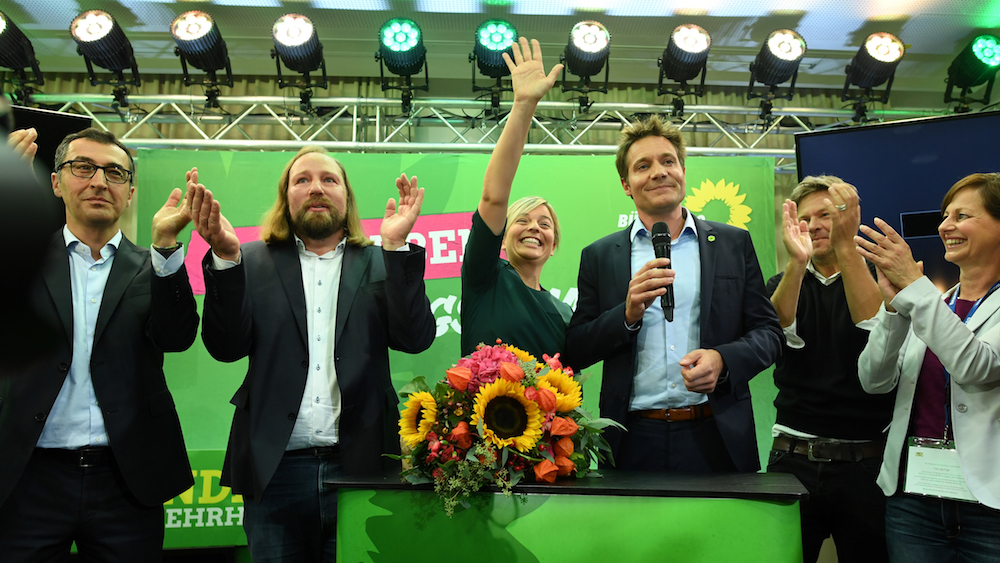 “Zero days, zero hours, zero minutes, zero seconds,” a big LED countdown read, leaning against the stage where Bavarian Green party members celebrated. The first prognosis for the state election results had just flickered across TV screens. And there was much to shout about. The Greens had succeeded in what they had promised to do during a year-long campaign: To end the absolute majority of Bavaria’s conservative Christian Social Union. In the end, Sunday’s election result saw the CSU support dropping dramatically to 37.2 percent, while the Greens won a record result of 17.5 percent, effectively doubling their seats in the state parliament.

This success story was splashed across headlines, running counter to the narrative that dominated the news before the election: how the far-right Alternative für Deutschland (AfD) had eroded the foundation of the conservative stronghold and pushed the Bavarian ruling party to the right. The CSU had tried and failed to dabble with populist sentiment when party leader and Federal Interior Minister Horst Seehofer brought the government coalition with Chancellor Angela Merkel’s CDU and the Social Democrats (SPD) to the brink of collapse this summer by pushing for harder migrant policies.

In the end, neither the far-right nor the CSU succeeded with their focus on anti-migrant sentiment; with 10.2 percent, the AfD scored less than they did in federal elections in September 2017, leading some to interpret the Greens’ success in Bavaria as proof that the populist wave gripping European politics is over.

However, there is more to the Greens’ strong showing. A first analysis of voter migration suggests the CSU hadn’t lost as many party loyalists to the Greens as expected. Instead, it may have underestimated those who were always more skeptical of the traditional peoples’ party or Volksparteien, as parties like the CDU/CSU and SPD in Germany are called.

The Fading Charm of Brez’n, Beer, and Brass

Almost half of Bavaria’s 9.5 million-strong electorate was undecided before election day. On the final days of the campaign, the conservative state premier Markus Söder was confident to win over many of those votes for his CSU. Undecided voters traditionally turn out for the Conservatives, the established political force in Bavarian public life, having dominated Bavarian politics for six decades. But this time banking on the charm of pretzels (“Brez’n”), beer, and brass didn’t work, even though turnout increased by almost 10 to 72.4 percent.

The Greens, for their part, still decorate their platforms with large pots of sunflowers, but the party has come a long way from its image as a club for tree-huggers. Surveys by Bavarian public broadcaster Bayrischer Rundfunk showed that the Greens had managed to establish themselves as a party that voters saw competent on more topics than their core brand of ecology and sustainability. By offering solutions to issues from digital infrastructure to affordable housing and child care, they mirrored the variety of voter concerns rather than engaging with the anti-migration narratives of their opponents. And reflecting the plethora of daily life issues may have ultimately been a key factor of their success.

Another is their new emphasis on a more Realpolitik-driven approach, also on the federal level. This spring the Greens kicked off a two-year process to rewrite their national party manifesto and to modernize and rethink their policies. How deep-rooted this multifarious approach has become within the party could be measured by the high-profile supporters of Ludwig Hartmann and Katharina Schulze, the leaders of the Bavarian campaign. On Sunday they were joined by on of the national leaders, Robert Habeck, as well as the Bundestag’s Green caucus leader, Anton Hofreiter, the left-leaning first-generation party member Claudia Roth, as well as the party the pragmatic MP Cem Özdemir from Baden-Württemberg, where the Greens are actually leading the state government, with Angela Merkel’s CDU as the junior partner.

The Greens’ strong result brings new complexities, however. Entering the Bavarian parliament as the second largest party, with 38 out of 205 seats, they are venturing into new territory, and the question now turns to how to use this new strength: it will not get them into government, as the CSU will likely enter a coalition with the Freie Wähler party. Therefore, the Greens have to establish themselves as a broad opposition force to be reckoned with, a role the party hasn’t played in the past. The real challenge for the Greens, it seems, isn’t getting where they wanted to be, but how to move forward.