Greek has exited its final eurozone bailout program. But now Greek leaders, with their country still in economic crisis, are resurfacing demands that Germany pay reparations for the Nazi occupation. In Berlin, that’s a non-starter. 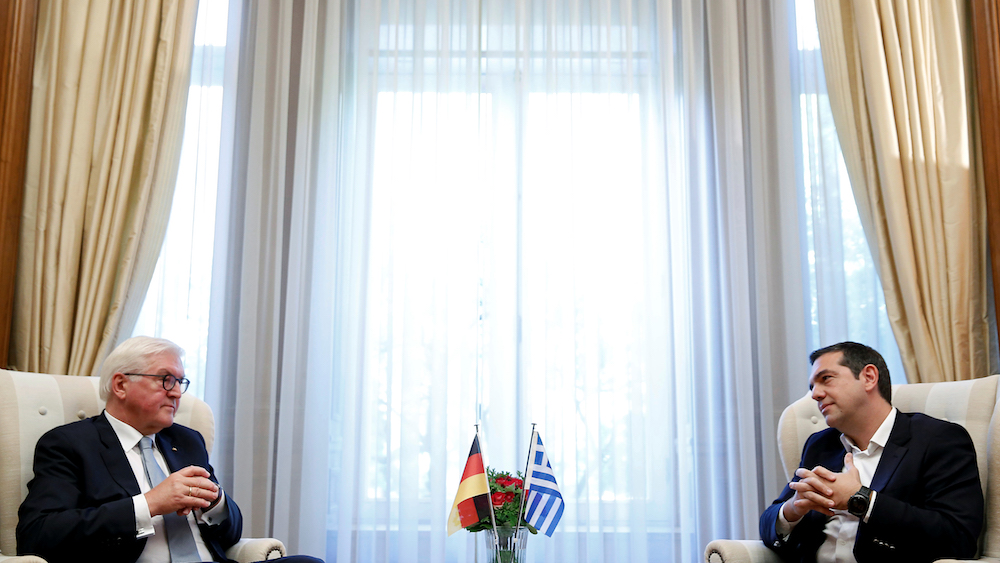 Late last week, German President Frank-Walter Steinmeier visited Kalamata, the southern city of Greece best known for its olives. He was invited by Greece’s President Prokopis Pavlopoulos, a proud Kalamatan himself; they toured the nearby archeological site of Messene, one of the best-preserved ancient cities in the world, and Steinmeier received Kalamata’s golden key from the mayor.

The city’s left wing parties, however, are strongly against such niceties toward German officials, and they made their voices heard ahead of Steinmeier’s arrival. They are calling for Germany to pay Greece World War II reparations, and it’s a demand the Greek government has taken up as well, again.

On the first day of Steinmeier’s visit to Greece, both Pavlopoulos and Prime Minister Alexis Tsipras told the press—in front of Steinmeier—that Germany must pay reparations to Greece for WWII atrocities.

Tsipras said that the differences between the two countries shouldn’t be swept under the rug but resolved, according to international law.

Under the Nazi occupation of Greece, some 300,000 people perished–around 10 percent of the population at the time. Greek Jews were eradicated. The country’s infrastructure was destroyed and archeological treasures stolen. In Kalamata itself, Nazis rounded up some 520 men on February 8, 1944 and killed them, secretly burying their bodies on the outskirts of the city; families only found out about the mass grave days later. The World War was later followed by a civil war and it took decades for the country to recover.

For all these reasons, there has been a long-simmering debate in Greece on whether the country should take Germany to court.

Steinmeier, blinking in front of the press, apologized for the Nazi atrocities but didn’t comment on the reparations. An answer had already been given by Angela Merkel the previous week, when she denied that any discussions would commence.

The awkward dance is nothing new for these two governments. In 2015, when Tsipras’ left-wing Syriza was first elected, a reparations committee was set up in parliament. The committee produced a report in 2016 with Greek claims totaling more than 270 billion euros, including reparations for victims’ family members, for the destruction of the country’s infrastructure, and for the 476-million-Reichsmark loan that the Nazi regime forced the Greek Central Bank to hand over.

Since he started the negotiations on the third bailout, Tsipras hadn’t brought up the reparations issue –until now, that is, and for an important reason: Greece exited the eurozone’s final bailout program in August. Yet the country is still crippled after nearly nine years of a debt crisis that saw the economy contract by more than 40 percent.

Athens might also be taking advantage of deep-seated resentment towards Berlin, a chief driver of stringent austerity measures during the crisis; many Greeks believe that policy has prolonged the crisis and sent thousands of people tumbling below the poverty line.

The Germans are fixed in their position, however. Berlin claims that after the Two-plus-Four agreement struck between East and West Germany and co-signed by France, the Soviet Union, the United Kingdom, and the United States, no further war reparations would be made against Berlin. The Greeks, on the other hand, say they never signed such an agreement.

If Greece’s government wanted to push the matter now, however, a decision by the country’s Supreme Court would give Athens a bargaining chip. According to the decision, any German government property in Greece should be confiscated and given to the survivors of the Distomo massacre, where the SS killed more than 214 people in the village of Distomo, in retaliation for an attack by the resistance movement. If the justice minister were to sign the court’s decision, it would become binding. But no minister until now has dared to do so.

Whether the Greek government is earnestly trying to take advantage of the country’s momentum after exiting the bailouts, or if it’s just trying to cash in votes for next year’s national elections, is not yet clear. Europe, and in turn Germany, still holds immense political and economic power over Greece, even post-bailout: Athens is still paying back its massive debt, and whatever the government does has to be approved by its creditors.  If Greece stays on a hardline course to seek reparations, the situation could escalate.