Andrea Nahles stepped down as head of the Social Democrats on Sunday. Her colleagues now have to decide how long to remain in government. 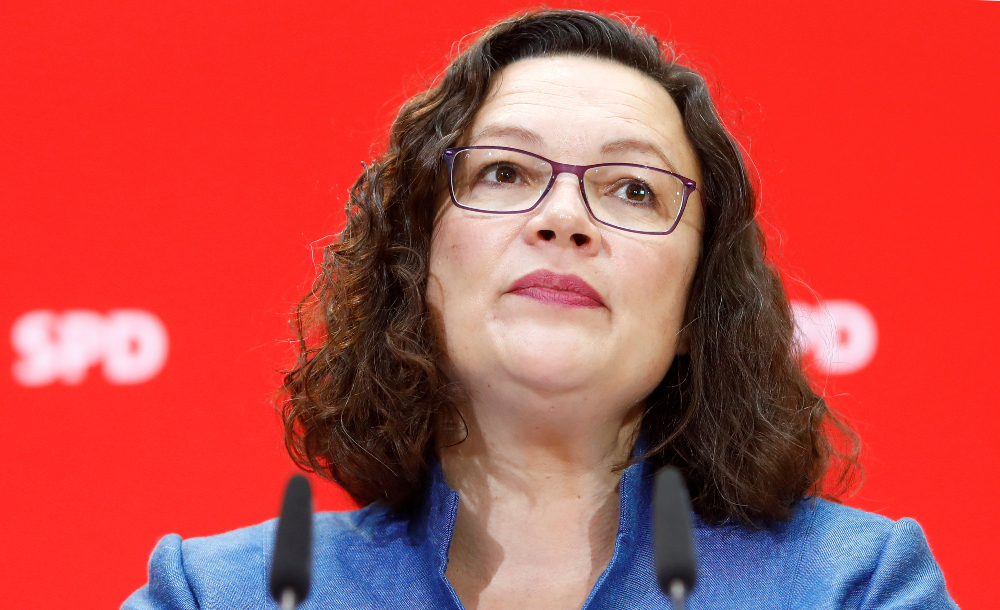 SPD party leader Andrea Nahles resigned on Sunday after a disastrous week in which the Social Democrats won only 16 percent of the vote in the European elections (11.5 percent less than in 2014) and lost to the CDU in the city state of Bremen, a traditional party stronghold it has governed for over 70 years.

In the aftermath, a bitter debate erupted within the party over how to respond—and whether it was worth staying in government with Chancellor Angela Merkel’s CDU/CSU if voters weren’t recognizing or satisfied with their work. Nahles, the person in the SPD leadership most supportive of the present “grand coalition,” or GroKo, initially went on the offensive, moving up the election for leader of the parliamentary group from September until Tuesday.

But by the weekend, it was to clear that Nashles simply didn’t have the support of her colleagues. The woman who spent 30 years working her way up the party ladder stepped down in a matter of days, having hung on to the job just a few months longer than her predecessor Martin Schulz.

How did it happen? The dust is still settling, but other Social Democrats have spoken openly about the infighting that went on behind closed doors. Members of a party promising “justice and solidarity” should “never, never, never again treat each other like we did in the past few weeks,” wrote Kevin Kühnert, the influential head of the party’s youth wing. Michael Roth, the minister of state for Europe, tweeted that some of his colleagues “should be ashamed of themselves.”

Even Nahles’ opponents had warm words for her. Merkel praised her “fine character,” FDP head Christian Lindner her “honesty and competence.” SPD supporters, meanwhile, drew attention to her concrete achievements, such as pushing through a national minimum wage against CDU opposition when she was labor minister in the previous coalition.

Evidently, though, these achievements did nothing to stop Germans from voting for the SPD’s competitors. The fact that the chancellor was introduced to graduating Harvard students last Thursday as the person who “introduced the minimum wage” says everything about the perils of being a junior partner in government. Citizens don’t always know who to blame—or who to credit.

The SPD does not yet have a replacement lined up; the party leadership will temporarily be held by three politicians: Mecklenburg-Vorpommern premier, Manuela Schwesig, Rhineland-Palatinate premier, Malu Dreyer, and the boss of the SPD in Hessen, Thorsten Schäfer-Gümbel. As the most prominent Social Democrat on the federal level, Finance Minister and Vice Chancellor Olaf Scholz will certainly be in the mix for the top job, although on Sunday night appearing on talk show Anne Will, he said he wasn’t interested.

But that’s a personnel decision, not a decision about the future of the party or the coalition governing Germany as such. The SPD remains in an exceptionally difficult position: Can it afford to leave the government and risk triggering fresh elections at a time when it is well behind both the CDU and the surging Greens in the polls? Or, from another perspective: With the party stumbling from crisis to crisis and haemorrhaging support, can it afford not to?