Barack Obama’s speechwriter Ben Rhodes thought he would have committed a terrible mistake had he used the German word Schicksalsgemeinschaft as a rhetorical point. He needn’t have worried, but the use of the word in today’s Germany is still puzzling. 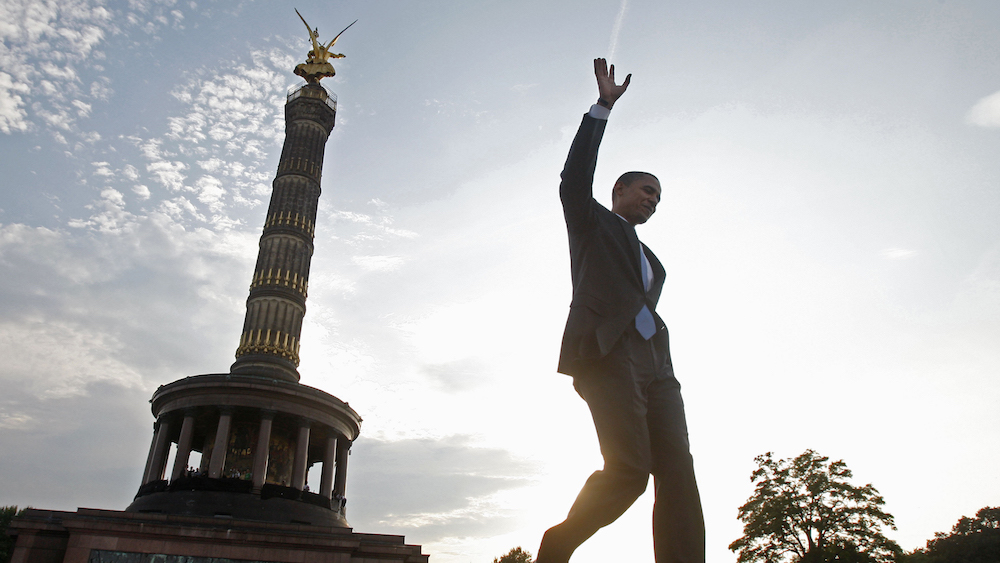 The third chapter of The World As It Is, the memoir by Barack Obama’s former speechwriter Ben Rhodes, is entitled “A Community of Fate.” The title refers to a phrase that Rhodes proposed to include in Obama’s speech in Berlin in July 2008, but removed at the last minute. Rhodes had hoped the speech would be comparable to the famous addresses delivered by John F. Kennedy and Ronald Reagan in Berlin during the Cold War. Rhodes’s speechwriter colleague Jon Favreau had been reading a book about the Berlin airlift. In it, a German woman who experienced American “candy bombers” air dropping supplies into West Berlin said of Germany and the United States: “We are a community of fate!”

Rhodes loved the phrase “community of fate,” which he felt “echoed” the Obama campaign’s message—and JFK—and planned to use it to end the speech. Obama loved it too—in fact, Rhodes writes, it was “the one thing in the speech Obama loved the first time he read it.” Obama was even meant to try to say the original German word—Schicksalsgemeinschaft—with the help of phonetic spelling, just as JFK had said “Ich bin ein Berliner” in German in Berlin in 1963.

However, just before the speech was to be delivered at the Victory Column, Rhodes was told by a German who was translating the speech on behalf of the Obama campaign that “Eine Schicksalsgemeinschaft” was the title of one of Hitler’s first speeches to the Reichstag. Rhodes immediately pulled the phrase and considered it a lucky escape. “How had I gotten so close to such a huge mistake?” he asks himself in the book. When he told Obama why they needed to drop the phrase, Obama joked about the headlines they might have got: “Obama echoes Hitler in Berlin speech.”

The implication of the story Rhodes tell in The World As It Is is that Schicksalsgemeinschaft is one of the many German words that has been contaminated by the Nazis. Yet the word is used all the time in debates in Germany—particularly in the context of the European Union. Chancellor Angela Merkel and former Finance Minister Wolfgang Schäuble have frequently talked about the EU and the eurozone as a Schicksalsgemeinschaft. So what’s going on here? Would going ahead and using the phrase “community of fate” really have been such a huge mistake as Rhodes concluded?

All In it Together

The word Schicksalsgemeinschaft expresses the idea that a particular group of people shares a common fate. Originally, it was used to describe coal miners, hostages, or the survivors of a shipwreck—in other words, groups of people that shared the possibility or experience of a disaster of some kind. But has also been applied to political communities. Put simply, it expresses the idea that we—whoever that is—are all in it together.

The Nazis used the phrase mainly in the context of the nation—Germany as a community of fate. If anything, it’s this application of the term in a national context rather than the term itself that the German political establishment seems to have rejected. the implication being that it’s not so much the concept of a “community of fate” that is problematic, but rather the idea of nation as an exclusive political community.

Yet the term is still sometimes used even in the national context without apparent consequences for the user. For example, in 2006, Christian Democrat parliamentary group leader Volker Kauder said in an interview: “Wer Deutscher werden will, muss sich auch zur deutschen Schicksalsgemeinschaft und damit zur deutschen Geschichte bekennen.” (“Anyone who wants to become German must also commit to the German community of fate and with it to German history.”) The interview was controversial not so much because of Kauder’s use of the word Schicksalsgemeinschaft but because of his use of the concept of Leitkultur—a difficult-to-translate term that suggests a monocultural vision of German society.

Rhodes was planning to describe Germany and the United States—and by implication the West—as a “community of fate.” In other words, he was planning to use the term in exactly the kind of international or transnational context that seems to be completely acceptable in Germany. It seems that he needn’t have been so worried.

However, the confusion about the term raises the question: when, exactly, should be acceptable to speak of a “community of fate” at all? There is a tendency in Europe, and in particular in Germany, to believe that the application of a concept at the European level somehow immunizes it from the problems it poses at the national level. It seems there is some feature of the European project that somehow transforms a problematic concept into an unproblematic one, but this is rarely made explicit, let alone explained. So if it is unacceptable to describe Germany as a “community of fate,” why is it acceptable to describe Europe as one?