German Chancellor Angela Merkel and her Bavarian interior minister Horst Seehofer have reached a deal. But this migration fight isn’t over, not in Germany and not in the EU. 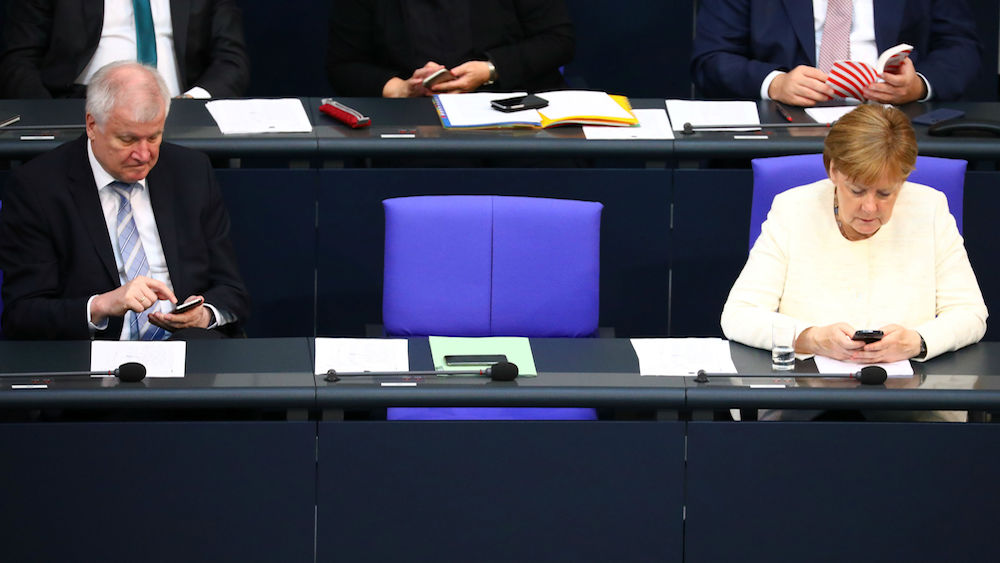 It hasn’t been easy to follow German politics over the past two weeks. Angela Merkel’s CDU and its more conservative, Bavarian sister party, the CSU, have been holding “crisis meetings” nearly every day. Late Monday night, however, an agreement was reached that will stabilize the situation, at least temporarily, and prevent the collapse of the German government.

Here’s a shortish version: The ostensible core dispute was about how to handle “secondary migrants,” migrants who have already applied for asylum in another EU member-state, but who then make their way to Germany. (For context, fewer than 20,000 of these people have entered Germany so far this year; and from January to May 2018, 78,000 people applied for asylum in Germany, compared with 745,000 in the full year of 2016.) According to EU rules, the “Dublin regulation,” the first member-state an asylum-seeker enters is generally responsible for evaluating his or her asylum claim.

The CSU has always taken a harder line on refugees. Horst Seehofer, the party boss and, since April 2018, interior minister, wanted to turn away the secondary migrants at Germany’s border, rather than to try and often fail to return them once they were already in Germany, as is currently the case. Merkel rejected his plans, for fear that unilateral German action would push other member-states to tighten their borders too—the Schengen dominoes, as it were, would fall one by one. In mid-June she asked for more time to find a European solution. The CSU begrudgingly gave her two weeks, until the EU summit.

So Merkel went to an all-night European Council meeting on Thursday, and brought a “European solution” home to Berlin. The EU was to set up “controlled centers” inside the EU—it’s not clear where—to evaluate asylum-seekers claims; member-states would then take in migrants deserving of protection on a voluntary basis. The EU would “explore the concept” of closed camps in North Africa and the Balkans, and stump up more money for Libya and Turkey to deal with refugees themselves. Most relevantly for the spat with Seehofer, Merkel secured a number of bilateral deals with other member-states, including Spain and Greece, who agreed to take back secondary migrants from Germany, largely in return for financial support.

Can’t Get No Satisfaction

Was that enough to satisfy Seehofer? Were Merkel’s bilateral agreements wirkungsgleich (equivalent in effect) to Seehofer’s plans to simply turn away secondary migrants at the border? When the CSU leader threatened to resign on Sunday, it didn’t look like it. But another crisis meeting late Monday night brought about a fragile compromise between the two conservative sister parties, and Seehofer has decided to stay in office.

There are three points to the CDU-CSU deal. First, a new “border regime” on the German-Austrian border will prevent the arrival of refugees for whom “other member-states are responsible.” Second, there will be “transit centers” at the Germany border, where secondary migrants will be held, processed as if they never really entered Germany, and quickly deported to their member-state of arrival thanks to bilateral deals. Third, secondary migrants coming from member-states with whom Germany has no bilateral deal, such as Italy, will be turned away at the German-Austrian border under the terms of an agreement with Austria. Crucially, that deal has yet to be agreed upon.

A debate has exploded in Germany about the merits of the conservatives’ compromise. This is surely not the last time the CSU will challenge Merkel in order to score political points ahead of Bavarian state elections in October.

And will the plan work? Secondary migrants, some of whom risked their lives to cross the Mediterranean in a rickety smuggler’s boat, may not be deterred by spot checks on foreign-looking people at the German-Austrian border. They could cross another border into Germany, or sneak in through the forest, or allow themselves to be taken to a transit center only to disappear somewhere into the country. Transit centers are not prisons. If they were, Merkel’s coalition partner SPD wouldn’t accept them. As it is, Merkel’s grand coalition partner may have trouble accepting this tougher line on migration. Watch this space.

Consequences for the EU

What’s already clear is that the CDU-CSU compromise has consequences for the EU. Germany has no deal to return secondary migrations to Italy, the largest source of such migration. It is unlikely to get one, as Italy’s xenophobic interior minister, the far-right Lega leader Matteo Salvini, wants to stop migrants from entering Italy in the first place, not take more of them from Germany.

Nor is Austria eager to welcome the refugees Germany can’t return to Italy. The right-wing government of Chancellor Sebastian Kurz has already issued a statement: “Should this agreement become the German government’s position, we see that as prompting us to take action to prevent negative consequences for Austria and its population. The Austrian government is therefore prepared to take measures for the protection of our southern border in particular.” Said plainly, that means Vienna is ready to turn back migrants on its borders to Italy and Slovenia—who, again, aren’t eager to be “waiting rooms” for migrants who want to move north.

It is a pernicious myth that Merkel believes in a Europe of uncontrolled migration, where refugees fleeing terror and economic migrants alike are free to go where they please. Nor did she “open Germany’s borders” in 2015. That September, with hundreds of thousands of people walking to Germany from Hungary, the decision she made was to keep the borders open, because Merkel believed in free movement within Europe and Germany’s humanitarian responsibility.

Since then, Merkel’s governments have cut deals abroad to reduce migration and tightened conditions for asylum-seekers in Germany. “Wir schaffen das” always meant “we can handle this”, not “we can do it!” It was less a progressive rallying cry than a determined appeal for calm and focus, and by and large, it worked.

Now, Merkel’s deals with both EU leaders and the CSU depend on voluntary support from member-states that don’t want to give it. Efforts to reform the Dublin regulation or distribute migrants across the EU are going nowhere. At the same time, the EU’s ramshackle migration infrastructure looks shakier than ever, despite irregular migration numbers falling.

Europe’s deals with third countries also raise troubling questions about how long people must stay in a camp, and under what conditions. And the talk of opening up legal immigration avenues for economic migrants is mostly just talk.

Merkel’s vague compromise with Seehofer is another step toward harder European borders, internal and external. That’s the trend in Europe these days.