The German chancellor staved off a government collapse with an eleventh-hour deal to save her conservative bloc. But Angela Merkel’s power is waning. 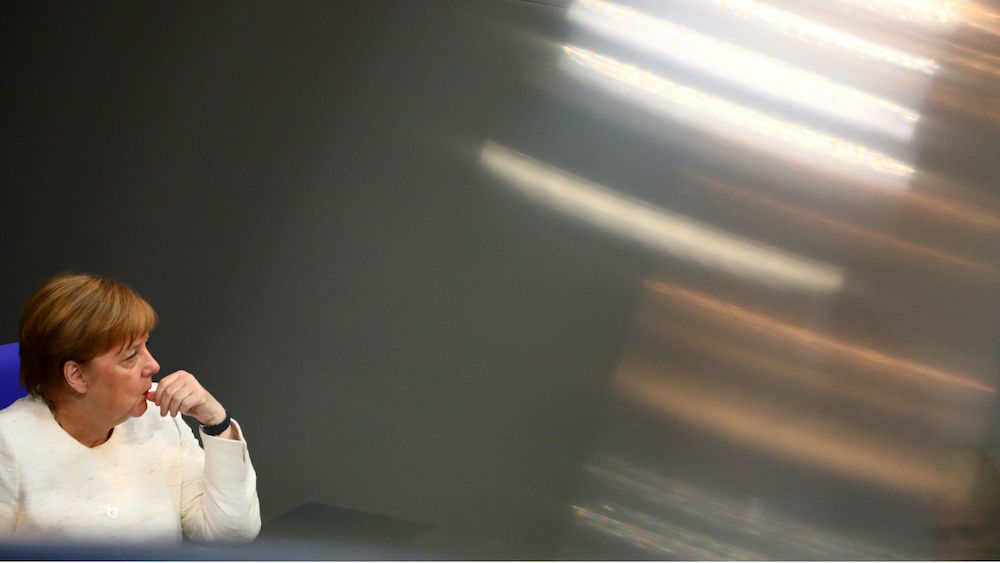 After her third late-night crisis meeting in four days, Chancellor  Angela Merkel looked understandably worse for wear on Monday when she announced an eleventh-hour deal with her rebellious Bavarian sister party to tighten migration policy and save her government.

The agreement emerged from a last-ditch attempt to prevent Bavaria’s Christian Social Union (CSU) from implementing its own controls on their border with Austria against Merkel’s wishes. That threat had sparked an almighty row between Berlin and Munich that risked the rupture of the CSU’s seven-decade alliance with Merkel’s Christian Democratic Union (CDU).

“After a tough struggle and some difficult days, we’ve found a really good compromise,” said Merkel. The deal salvages her chancellorship and fourth-term coalition, and will see her interior minister Horst Seehofer, the CSU leader, stay on in Berlin after he threatened to resign on Sunday evening.

“We agreed after very intense negotiations,” he said after the meeting. “This is a clear agreement to prevent illegal immigration in the future on the German-Austrian border.”

They agreed on so-called transit centers at three major crossings along the German-Austrian border, where asylum-seekers will be directed into closed camps; those who have been previously registered in other EU countries will be returned, as long as Berlin has an agreement with those countries (more on that here).

This week’s dramatic escalation caught some by surprise, but the dispute had been simmering since the 2015-16 “refugee crisis,” when Merkel–fearing a humanitarian disaster–declined to close German borders to more than one million asylum seekers on their way on the “Balkan route.” The CSU, based in Bavaria, the state where most asylum seekers were arriving, demanded a tougher stance. But it eventually fell in line behind Merkel. After both parties were trounced in last September’s federal election, the CSU fears a repeat drubbing in October’s state election in Bavaria and is scrambling to position itself as tough on migration.

But there are more challenges to Merkel’s government-saving compromise: It now has to be approved by the third party in her coalition, the Social Democrats (SPD).  Three years ago the center-left SPD rejected a similar proposal as “arrest zones.” On Tuesday, Katarina Barley, the federal justice minister who is from the SPD and will be involved in drafting legislation for the facilities, said she had more questions than answers. In particular: what happens to people who avoid the three border crossings and choose another entry point to Bavaria along the 819 kilometer green frontier?

The transit camps, whatever form they take, are not part of their coalition agreement and are highly unpopular with SPD left-wingers. On the other hand, after disastrous elections last year for Germany’s big parties, a tortuous six-month interregnum, and now the near government collapse, there is little appetite in Berlin for more turmoil—and far less for a snap election.

After weathering the refugee crisis on the frontlines in 2015, the CSU hopes its voters will forgive it for originally backing Merkel as hundreds of thousands entered the country through Bavaria.

Though asylum applications have dropped off significantly (68,000 so far this year compared to 746,000 in all of 2016), the CSU is confident that, by extracting a law-and-order pound of flesh from Merkel, it can win back voters from the far-right Alternative für Deutschland (AfD).

Seehofer stays on as interior minister and CSU leader, but at the mercy of the real strong man in Bavaria: state premier Markus Söder, another key figure in this government crisis. Seehofer now faces the difficult task of trying to restore some sort of working relationship with the CDU and Angela Merkel (after reportedly saying, in the throes of the dispute, that he “can’t work with this woman” anymore); but he must also follow orders from Söder in Munich if the approaching election requires further muscle-flexing.

Germany’s asylum agreement looks like a victory for the CSU over the chancellor. The fuzzy “transit center” euphemism marks a radical departure from Merkel’s liberal “we can manage this” approach to the refugee crisis in 2015.

Facing a darkening public mood on asylum as attacks committed by refugees have garnered high media attention–particularly after a high-profile murder-rape committed by a young Iraqi asylum seeker–Merkel yielded to her coalition partner to keep the peace. She saved her coalition and maintained her hand on the tiller.

But she is a diminished figure. Her party rallied to support her during the CSU’s attacks, but her authority is no longer absolute. It seems only a matter of time before an ambitious challenger overtakes her or, pre-empting such a move, she stands down in Berlin.

On the other hand German voters, while uncertain about Merkel’s record on migration, are unsure of whether there is any realistic alternative–or one that would be any more reliable. A poll last week showed that even in Bavaria, she was more popular than local strongman Markus Söder. In her own party there are many figures who feel best-suited to inherit the Merkel mantle, but none where the public agree.

Even during a crisis like this in Germany, it still seems to hold true that the devil you know is better than the devil you don’t.