Donald Trump’s visit to NATO comes as transatlantic relations hit their worst point in seventy years, amid escalating trade and military disputes. The US-Europe partnership is living in a powder keg, and many fear that in Brussels next week, Trump will light a match. 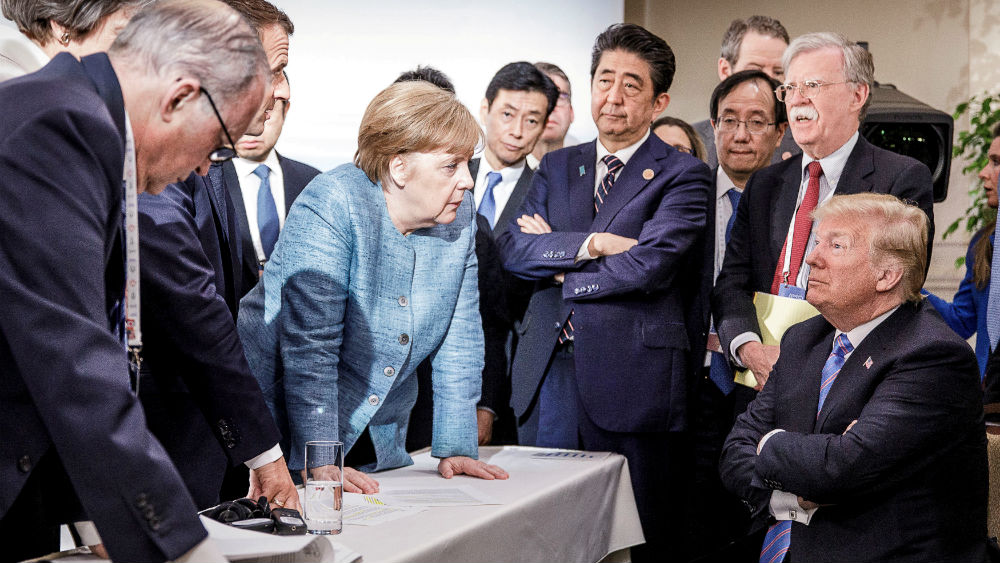 When US President Donald Trump comes to Europe this week, he is not going to be greeted by cheering crowds. Thousands of people are expected to turn up at anti-Trump demonstrations in Brussels this weekend, ahead of Trump’s attendance at a NATO summit on Wednesday and Thursday. Even larger protests are expected in the United Kingdom when Trump makes an official state visit following the summit.

This is not just protestors demonstrating against the actions of their government; they are doing so with the tacit approval of their leaders. Revulsion at Trump’s America extends from the top down in Western Europe. London Mayor Sadiq Khan this week authorized a giant balloon depicting the US president as a baby in a diaper to fly over Westminster during the visit. Trump has in the past brutally criticized Khan, accusing him, among other things, of being soft on terrorists.

But all eyes will be on the NATO summit, where Trump will meet Europe’s two most powerful leaders, French President Emmanuel Macron and German Chancellor Angela Merkel. Both of them seem to have lost patience with the US president. This week, Merkel told the German parliament that Europe will not back down in the face of Trump’s trade and military threats, disputing his claim that the US has a large trade deficit with Europe. She warned that the current trade conflict could escalate into “a real war” if cooler heads don’t prevail.

She also shot back against a letter Trump sent to her ahead of the summit demanding that Germany immediately increase its military spending to two percent of its GDP—the suggested level for NATO members. “We are the second biggest provider of troops, we are participating in several missions, and Germany will remain a reliable partner of NATO,” she told the parliament.

Macron, who had previously tried to make nice with Trump, seems to have abandoned that strategy following the disastrous G7 summit in Canada last month, where Trump berated the other leaders and left early. Macron’s team let it be known that during the summit Trump called NATO “as bad as NAFTA”—the US free trade agreement with Canada and Mexico that Trump says is unfair—and even offered Macron a financial reward if he took France out of the European Union.

Even populist and far-right leaders in Eastern Europe, who might be ideologically sympathetic to Trump’s world view, have grown exasperated with the US president’s Europe-bashing over the past months. They all signed on to EU counter-measures against Trump’s trade and aluminium tariffs without hesitation. And while leaders like Hungary’s Viktor Orbán haven’t openly condemned Trump, they haven’t defended him either. Indeed, it would seem Trump has no friends at the moment in the EU.

That exasperation grew last week when Trump told a rally in the US state of Wisconsin that the EU was “set up to take advantage of the United States, to attack our piggy bank.” The EU was, of course, actually set up in cooperation with the United States—at America’s urging.

EU leaders are talking in increasingly stark terms about the death of the transatlantic alliance. A senior EU official said Trump’s attacks on the EU, NATO, and free trade now look like “the pattern of an American doctrine in which there are no friends.”

Donald Tusk, the president of the European Council, said in a letter to national leaders last week that the EU must prepare for “worst-case scenarios” in its relations with the United States. Guy Verhofstadt, the leader of the Liberal group in the European Parliament, said on Monday that Trump is pushing a pro-Russia foreign policy that aims to cause the collapse of both the EU and NATO in order to benefit Moscow.

Trump is planning a bilateral summit with Russian President Vladimir Putin in Helsinki on July 21. There are expectations that he may offer to end US sanctions for Russia’s 2014 invasion and annexation of the Ukrainian territory of Crimea, and offer Russia a free hand to back Bashar al-Assad in Syria.

“Whether Trump realizes what he is doing is up for debate, but what is clear is that he is now acting in a way that threatens the stability and economic partnership between western liberal democracies,” said Seb Dance, a British Labour member of the European Parliament.

It is this context that has so many worried about the outcome of Wednesday’s summit—including Trump’s own generals. Reports have circulated that the US Mission to NATO is trying to manage Trump’s visit in a way that will give him as little opportunity to speak as possible. There was even speculation that the US military leadership had tried to convince the US president not to attend the summit.

Trump is expected to berate the European leaders for not spending enough on their military, as he did during last year’s summit. But the fear is that he will go much further this time. A lot has changed since last year. Europe and America are now in a trade war, and it seems unlikely that this will not come up at the summit, even though it is not related to military matters. Trump has implied that Europe owes America favorable trading terms as payment for the US military protection that NATO provides.

In the corridors of power in Brussels, Europeans are coming to accept that they are not considered friends of Trump’s America. But what if they become enemies? It depends which Donald Trump shows up in Brussels on Wednesday. An erratic Trump could threaten to pull the US out of NATO, which would leave Europe without the ability to militarily defend itself. It is a volatile moment, and much will depend on whether the American generals can steer the president away from microphones.

But Trump can only be steered for so long. What is clear now is that the enduring institutions of the Pax Americana, set up by the US after World War II, are unraveling. Perhaps the most astonishing sign of this came this week, when reports emerged that the Trump administration wanted to partially pull the US out of the World Trade Organization.

“It is clear to me following President Trump’s unilateral withdrawal from TTIP, TPP, JCPOA, Paris Climate Change Agreement, and blockage of the US nomination to the appeal body of WTO that this is part of a wider exceptionalist policy,” said Charles Tannock, a British Conservative member of the European Parliament.

“I don’t think President Trump holds sacrosanct any of the traditional pillars of the UK special partnership such as close alliance within NATO or even the UN primacy for security,” he added. “Trump wants a club of strongmen all operating on a bilateral basis again. It’s as if World War II has taught the West nothing. President Putin will be overjoyed by all this.”

Trump will be able to deliver that message to Putin personally a week after the NATO summit. By the end of July, the world may be looking at a very changed geopolitical and economic landscape. Wednesday’s NATO summit could, therefore, prove to be the most consequential in the alliance’s history.