On the day of the biggest climate demonstrations Berlin has seen yet, Angela Merkel’s government presented a “climate package” that disappointed. 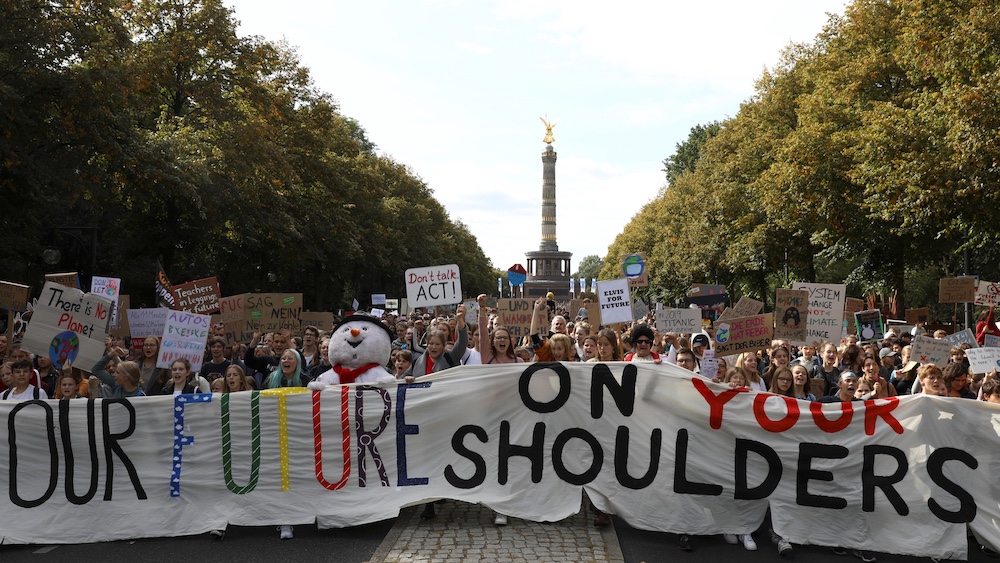 Gretchen, from Berlin, wanted “a clear CO2 price.” Her school-age daughter held tight to her poster, too shy to answer. Tim, from Florida, stood nearby in a Bernie Sanders t-shirt with a sign about the Green New Deal and said he was simply “here to support the climate strike.” On the other side of the Brandenburg Gate, Simon was handing out Fridays for Future flyers but admitted he “wasn’t expecting much.” An older woman nearby hoped that the German government would offer more than “superficial solutions.”

This was at 12:30 p.m. at the Brandenburg Gate, the center of the climate protests that drew about 100,000 people in Berlin and even more across Germany. If everything went to plan, Chancellor Angela Merkel would have been announcing Germany’s new “climate protection package” at the same time—but the leaders of her Christian Democrats (CDU/CSU) and the Social Democrats (SPD) had been up until the early morning hammering out the details.

Merkel, flanked by all of the grand coalition heavyweights, finally took the podium at Berlin’s Futurium two hours later. She acknowledged the scale of the climate crisis and said she was impressed with Greta Thunberg’s call to “unite behind the science.” SPD Finance Minister Olaf Scholz didn’t mince words either: “With the climate protection packet, we are taking this seriously… Fridays for Future has shaken us awake.”

Not Doing Its Bid

But are the announced measures enough to satisfy Gretchen and Simon, to keep Germany on track to do its part to uphold the Paris Agreement? It doesn’t look like it.

The key element of the package is a pricing system for emissions from the transport and building sectors. Through an emissions trading system, Germans will have to pay for each ton of carbon dioxide they emit. For example, heating companies and petrol stations will have to buy permits for the emissions they cause by selling heating oil and gasoline, thus raising prices for consumers and encouraging more sustainable behavior.

However, a ton of CO2 will cost only €10 in 2021 before increasing to €35 in 2025. That translates into an extra 3 cent tax on every liter of gasoline in 2021, but because the tax subsidies for long-distance commuters will also be increased by 5 cents per kilometer, gasoline will in some cases be cheaper in 2021 than it is today. Although governments always have to consider the social impact of climate policy, it is certainly a curious decision to subsidize driving to work rather than just returning money to low income groups—whether people bike, drive, or walk.

As a bevy of critics have already pointed out, the price on CO2 is dramatically lower than what scientists, behind whom Merkel wants to “unite,” are calling for. The German Environment Agency, which provides the government with scientific advice, has advocated a carbon price of €180 per ton. Two of Germany’s most esteemed climate think tanks, the Mercator Research Institute and the Potsdam Institute for Climate Change Research, urge a price of €35-70 in 2020 and €70-180 by 2030.

For reference, Sweden taxes carbon at about €110/ton; Switzerland is discussing a carbon price floor of over €100/ton. In the US, Exxon, Shell, and BP are lobbying for a $40/ton tax.

Merkel admitted the carbon price system was “a compromise, no doubt about it.” Compromise is the art of politics; chancellors don’t just read scientific papers and force them through as policy. The thing is, these numbers aren’t even in the same ballpark. Those the chancellor dismissed as “impatient young people” won’t think much of the measure.

Climate activists will also be disappointed with the move to reduce the so-called renewable reallocation charge or EEG-Umlage, which raises the price paid to producers of renewable energy. In this instance, the government has a stronger argument. With the price of carbon in the EU emissions trading system increasing—unlike the complementary German system announced today, the European version covers industry and electricity generation—European producers of high-carbon products like steel, cement, or chemicals are at a significant competitive disadvantage vis-á-vis foreign manufacturers. Until the European Union starts taxing carbon at the border, the price of electricity can only go so high before industry must move abroad or shut down. European Commission President-elect Ursula von der Leyen has already expressed her support for a carbon border adjustment tax.

The other measures are a mix of price incentives and outright regulation or bans. For example, the government will reduce the value-added tax on train tickets from 19 to seven percent. At the same time, the tax on domestic flights will be increased. It will also be forbidden to build new oil heating units after 2025, and the government will help pay for customers to switch to climate-friendly alternatives.

Merkel had the courage to admit that her government’s previous climate policy has failed: Germany will miss the climate targets for 2020 that a previous Merkel government set in 2007. To avoid this happening again, the “climate cabinet” will continue to meet in the future and there will be yearly monitoring of the country’s progress.

Carbon pricing, tax incentives, bans on especially unsustainable behavior—these are all sensible measures. And with so many world leaders still denying climate science, it’s hard to be too critical of a center-right government that acknowledges the problem and spends its political capital raising taxes, for example on flights and petrol.

Standing by the Schwarze Null

Yet one is left feeling that the deeds do not match the words about the threat facing future generations. Finance Minister Scholz said the package would cost €54 billion by 2023. No small sum, though Merkel reiterated that the government “stands by the schwarze Null”, Germany’s policy of avoiding budget deficits.

At a time when investors are paying the German government for the privilege of lending it money, and the country appears to be headed for a recession, it is astonishing that Merkel’s government is unwilling to consider borrowing money to address what the chancellor calls a “challenge to humanity.” While no one expected the coalition to announce it was immediately giving up the cherished schwarze Null, there might have been a hint that it is time to change direction, to change Merkel’s legacy and put successors in a better place to cut emissions once the low-hanging fruit is all gone.

Instead, after 12 years of failing to hit climate targets, the government spent months working on a CO2 price that the directors of Environmental Action Germany and Greenpeace call, respectively, “laughable” and “miles behind the Paris Agreement obligations.”

Merkel will, then, go down in history as the climate chancellor. In every book written before 2010.