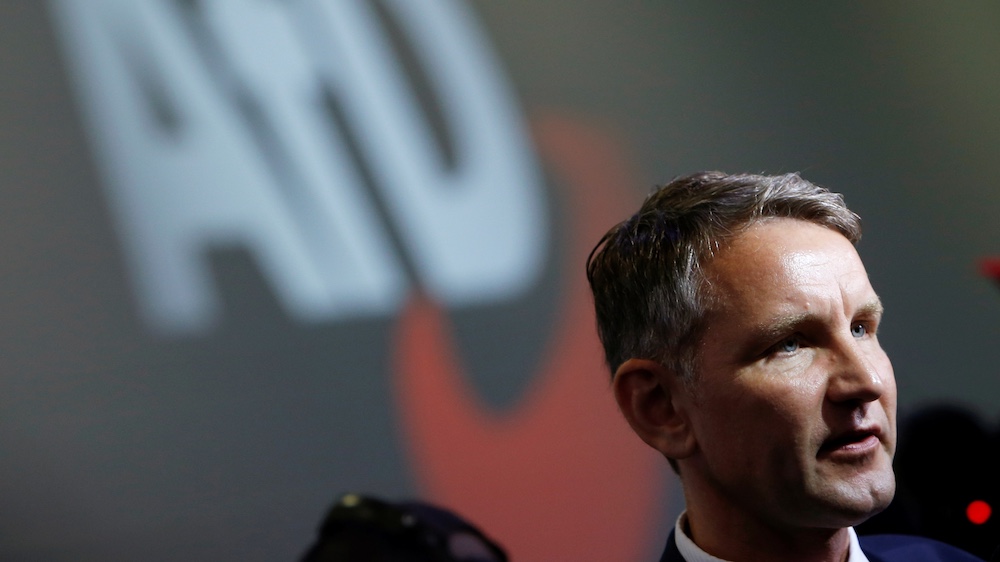 Are today’s right-wing populists in Germany using the same language as Adolf Hitler? An interesting journalistic experiment with Björn Höcke, leader of the most radical faction within the Alternative für Deutschland (AfD), certainly suggests so.

Höcke, 47, was a history teacher before entering politics and turning into the AfD’s far-right star. He is an intelligent, well-educated man who knows what he is doing when he speaks about the “thousand-year Germany” and calls the Holocaust Memorial in Berlin a “memorial of shame.”

More moderate AfD leaders—who have since left the party—have tried in vain to get Höcke expelled from the AfD for his revisionist, racist views and his closeness to neo-Nazi groupings. Instead, it is the party that has become more radical, particularly in eastern Germany, where it is most successful.

In regional elections on September 1, the AfD received 27.5 percent of the vote in Saxony and 23.5 percent in Brandenburg. Another strong showing is expected when Thuringia goes to the polls on October 27. Under Höcke’s leadership, the state’s AfD can expect up to 25 percent of the vote—a result that would certainly accelerate the radicalization of the party as a whole.

Against this backdrop, Germany’s ZDF television received a lot of attention with an unusual interview with Höcke. To prepare for it, the reporter took two quotes from Höcke’s book Nie zweimal in denselben Fluss (“Never twice in the same river”) and showed them to AfD deputies in the Bundestag. These were then asked on camera to judge whether the quote originated with Höcke or with Adolf Hitler’s Mein Kampf.

“A few corrections and small reforms won’t be enough, but the German absoluteness will guarantee that we will tackle the matter thoroughly and fundamentally,” the first quote said. “Once the turning point has come, we Germans will not stop half-way, and then the mounds of debris of modernity will be eliminated.”

Most of Höcke’s fellow AfD members started laughing when asked about the origins of the quote. Not one of them could answer. “No, I am not going to commit myself,” said Jens Maier, a leading far-right figure from Dresden. “But if I did, I would rather say from Mein Kampf but not from Mr. Höcke.”

Höcke’s second quote did not fare any better. “The longing of the Germans for a historical figure, who will once again heal the wounds of the people, overcome the strife, and put things in order is deeply rooted in our soul.”

So was it Hitler or Höcke? “I don’t know,” answered one AfD deputy. “I can’t answer that,” a second one said. The third interviewee took a bit longer. “I won’t be able to answer that question, because I did not read Mein Kampf, and whether it’s from Höcke, I don’t know.”

Interestingly, not one of the AfD politicians took offense at being asked to compare a 20th century dictator responsible for murdering millions of Jews and starting World War II with their fellow party member. Nor did any of them think to warn Höcke about the ZDF journalist’s line of enquiry.

When confronted with these answers, Höcke was clearly surprised. As the reporter showed him his fellow party members on a tablet, he gave a cautious smile. A pity that they didn’t read his book, he said. “I think it’s good that we have politicians again, who have the courage to express themselves in an original way and use a language that sometimes is too poetic,” Höcke added. “This must be possible.”

The interview with Höcke continues for several minutes more. The reporter points to occasions when Höcke has used Nazi terminology like “Lebensraum” or “degenerate,” while Höcke denies there is even such a thing as Nazi speak.

Finally, Höcke’s press spokesman intervenes. He explains that Höcke was not expecting any such questions and has answered in an “overemotional” way. He then asks the reporter to repeat the interview. The ZDF journalist refuses, however, and publishes the original version despite Höcke’s threats of “massive consequences.”

So what are the lessons from this interview? The first one is an insight into how far the AfD, a party founded as a conservative, euroskeptic movement, has moved toward the far-right. Höcke’s Facebook account shows his supporters firmly behind him (“Great guy, did everything right”). Not a murmur, either, from the national leadership of the party in Berlin.

Yet—and here’s the second lesson—what plays well in eastern Germany may not work for the western part of the country. Here, polls show the AfD stagnating at around 12 percent, only half of what it scores in the east. And even among those 12 percent, the share of Höcke supporters is far smaller.

The result is a political paradox: with its astonishing success in the east, the AfD may be risking its ambitions at the national level. Easterners may be more radical, but western Germans have the numbers.