It’s Sommerloch season in Berlin, where the government and Chancellor Angela Merkel go on summer break. But that hasn’t stopped the political wheels from turning in the capital. A debate over military service has dominated the headlines this week. 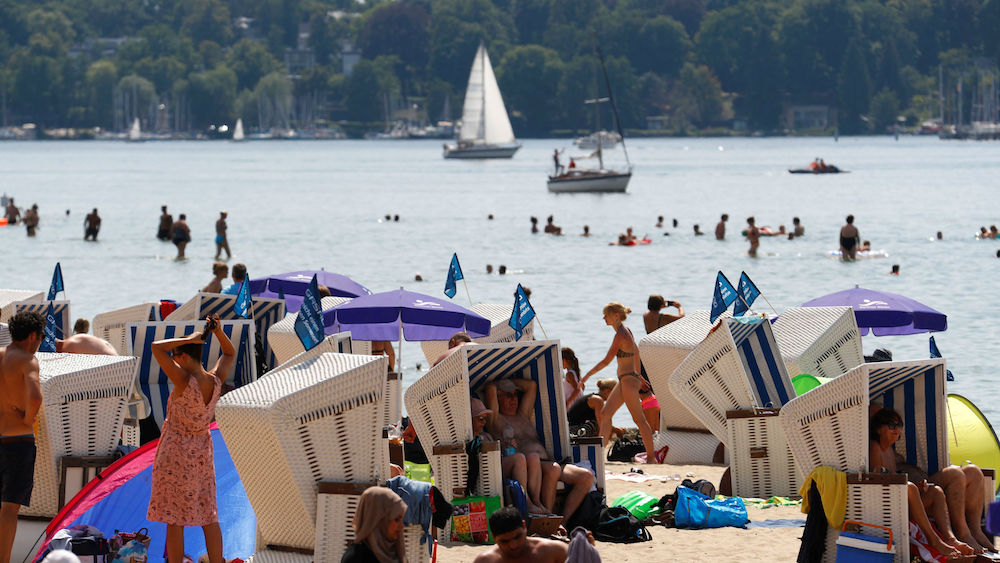 With scorched fields, parched rivers, and sweltering temperatures, Germany hasn’t had a summer like this in living memory. And Berlin hasn’t had a Sommerloch, or silly season, quite like this one in years either, with debates emerging that have real potential to last long after Germany’s political class returns.

Perhaps the most lively debate that has emerged over this summer break is over the prospect of reinstating compulsory military service. Seven years ago, Germany consigned to history the year-long military service duty for young people, as well as the alternative—civil, or community, service. But now there’s talk of reversing that decision, at least if we’re to believe Annegret Kramp-Karrenbauer, general secretary of Chancellor Angela Merkel’s ruling party, the Christian Democratic Union (CDU).

Kramp-Karrenbauer is considered a possible successor to Merkel and has built a reputation as a straight-talker, not known for shooting off her mouth. Last weekend she told a German newspaper that reviving military and alternative civil service was one of issues she was confronted with on nearly every stop of a recent “listening tour,” where she traveled across the country speaking to CDU party members.

This being August, when news stories are as rare as rain clouds, media and political commentators happily pounced on the story. Compulsory military service was abolished in 2011 as the defense ministry overhauled Germany’s armed forces, or the Bundeswehr, into a new, slimmed-down model of volunteers and professional recruits. But numbers have plummeted more dramatically than expected: at the time of reunification, there were 585,000 soldiers in the Bundeswehr; last year, there were around 179,000, with more than 20,000 vacant posts. The situation is so serious that the ministry is considering a new recruitment drive to encourage EU nationals to join up.

Despite those recruitment challenges, even those concerned about Germany’s struggle to meet its security obligations are wary. “Focusing on military service is too short-sighted,” said Roderich Kiesewetter, CDU head of the Bundestag foreign policy committee, warning the debate was too complex “to be used to fill a silly season hole.”

Unsettled by the momentum of the debate, a federal government spokeswoman intervened to insist Berlin has no plans to bring back military service. And Kramp-Karrenbauer took to Twitter to calm the waters, insisting she was not necessarily in favor of compulsory conscription, adding that “there are many ways to serve.” Still, she is likely to be happy she’s started a debate as the CDU faces tricky negotiations over a new party program and its next election manifesto. Paul Ziemak, head of the CDU youth wing, praised the idea of a community year as an “opportunity give something back while strengthening national unity.

Merkel, currently on holiday, has yet to express an opinion, though she will be watching closely to see which way public opinion blows before making her move. A poll this month found that nearly 56 percent of Germans would welcome a return of military duty. Legal experts warn that reactivating compulsory military service would be constitutionally difficult, as politicians would have to justify the move on security grounds.

Even if national service is not likely to be restored, the debate may woo back German conservative voters from the far-right Alternative für Deutschland (AfD). They view the abolition of military service as one of the great policy betrayals of the Merkel era.

Merkel’s center-left coalition partner, the Social Democrats (SPD), and other opposition parties are skeptical of the entire debate. Many who did their year of obligatory service remember how they were exploited as free labor—most frequently in the health sector, working in hospitals and elderly homes. Reintroducing civil service could backfire, they fear, with trained staff replaced by unskilled volunteers.

The Spahn Tour and a New Movement

But that could serve one man’s political agenda nicely: Jens Spahn, Germany’s health minister and another would-be Merkel successor. At the height of the summer, Spahn has been busy taking on Germany’s healthcare system. He pushed through a new law that will cap the number of patients to be cared for by home staff, in a bid to reduce the work overload for caregivers in for-profit facilities, where low pay and high stress has made the work so unattractive.

Despite Germany’s ageing population, there are too few care workers on the market. To counteract that, Spahn wants to boost salaries in a bid to attract previously badly-paid staff back into the workplace. He has also pushed through changes forcing employers to pay the same contributions for health insurance as their employees starting next year. And registered doctors will soon have to guarantee more office hours for patients on public health insurance as well. It remains to be seen whether these measures will have the desired effect, but for Germany’s ambitious health minister, who has an eye on the chancellor’s post, failing is not an option.

Meanwhile, on the other end of Germany’s political landscape, the summer season has seen the soft launch of a new left-wing movement called Aufstehen (“Arise”). Ahead of the official launch on September 4, its website went live last weekend and promptly drew in around 40,000 supporters—though it’s not at all clear to what exactly they have signed up.

What we know so far is that Arise has drawn inspiration from other political movements both inside and outside traditional party structures, from left-wing Democrat Bernie Sanders in the United States to France’s hard left leader Jean-Luc Mélenchon.

The driving force is Sahra Wagenknecht, Bundestag co-leader of the Left Party, and her husband Oskar Lafontaine, a former leader of the center-left Social Democratic Party (SPD). Wagenknecht has two main priorities: to attract people turned off by mainstream politics and to reactivate a left-wing majority by satisfying public demand for solutions to the social justice issues dominating German life, like living wages, pensions above the poverty line, and affordable housing

“Our goal is naturally [to achieve] different political majorities, and a new government with a social agenda,” Wagenknecht told Der Spiegel over the weekend.

Though details are scarce, the plan is for Aufstehen to develop policies and feed them into the political debate. Wagenknecht insists her aim isn’t to splinter Germany’s already divided left, but to call out parties (read: the SPD) whom she says are more fond of left-wing lip service than real policy.

“If the pressure is great enough,” she said, “parties will, in their own interest, open their lists to our ideas and campaigners.”

With temperatures hitting 36 degrees Celsius this week in Berlin, however, it remains to be seen how much appetite there is for Wagenknecht turning up the heat still further on her fellow left-wingers.