Following on the heels of French President and Trump buddy Emmanuel Macron, German Chancellor Angela Merkel is visiting the White House with a bit of baggage. 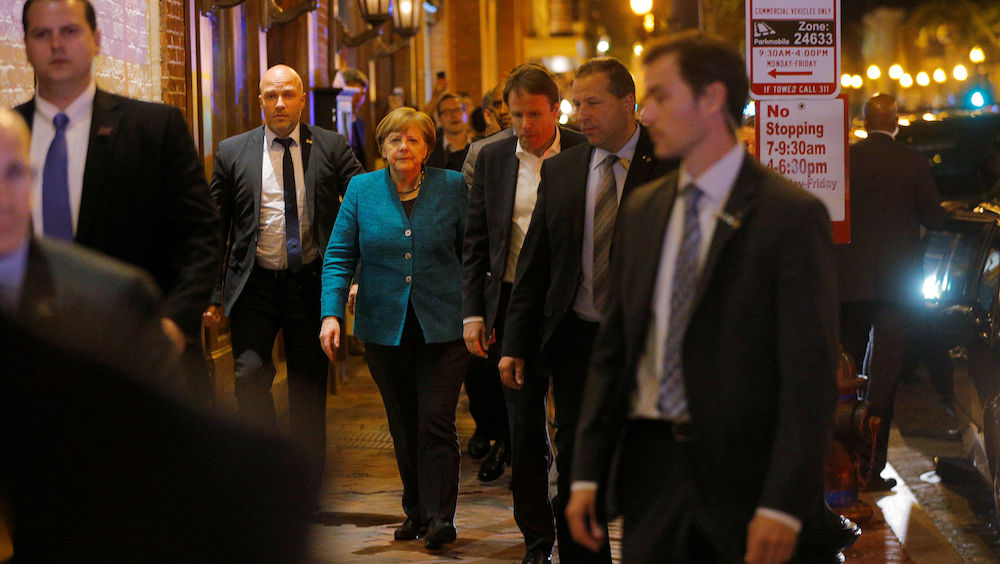 After her G8 meeting in Heiligendamm in 2007, Angela Merkel pulled off a political coup with the visiting US president, George W. Bush.

She invited her visitor to a Texas-style barbecue in her constituency. And as slack-jawed, salivating journalists looked on from a safe distance at the sizzling steaks, the German leader stole a march on her European rivals by making lingering Iraq war tensions vanish in a puff of fatty, black smoke.

A week after last year’s G7 meeting in Hamburg, French president Emmanuel Macron stole a march on other European leaders with a play from the Merkel handbook. He invited another contested US president, Donald Trump, to Paris for Bastille Day and wowed him so much that the commander-in-chief wants his own military parade in Washington.

This week saw the French leader secure most-favored status with a White House rendezvous. After a three-day spectacle of hugs, kisses, and other elements of a budding bromance, German Chancellor Angela Merkel will have a more sober, three-hour meeting with the US president.

She is anxious to pick up Macron baton on Iran, Syria, Ukraine—as well as uncertainties over global trade and looming US tariffs on EU products. By any measure, though, Merkel has an even greater challenge ahead than her French counterpart, given the US president’s notoriously short attention span.

She is likely to tackle head-on Trump’s primary bugbear with Germany: its trade surplus with the United States. Trump likes simple facts (or “facts”) and figures, but trade is a complex issue and a EU competence, Merkel will point out, with additional factors beyond Berlin’s control: exchange rates, oil prices, and consumer preferences for German products—in particular cars.

And although Germany exports 480,000 cars to the US, German-owned car plants in the US export 13,000 more vehicles annually to countries like China. Will Trump care for such details?

Like Macron, Merkel will use her visit for last-minute intervention on EU steel and aluminum exports to the US. With an exemption on tariffs expiring on May 1, Merkel will maintain her line that multi-lateral co-operation that adds “value for everyone.”

“That’s why we’re advocating global trade that is as free as possible, based on common rules,” said Merkel earlier this week at the Hanover Fair, Germany’s largest trade fair. Her officials struck a pessimistic note on changing Trump’s mind on trade. “We have to assume at the moment that tariffs will come into force … affecting our economy negatively,” said a senior Berlin official.

While Merkel is said to be open to striking a “broader trade package” extended to “other duties and trade barriers,” but will continue to remind the president that individual EU members states cannot negotiate bilateral deals with the US.

Russia looms large over discussion about the second Nordstream gas pipeline under the Baltic sea, bringing Russian fuel to Western Europe and bypassing Ukraine. For years Kiev has protested to Berlin, without much effect, that the pipelines allow Moscow reduce gas supply to Ukraine without affecting Western customers. In recent weeks, aware of renewed US interest in the project, Merkel has assured Ukraine it has nothing to fear while conceding the project has political as well as economic factors.

Echoing Macron, Merkel will urge Trump to adapt – not abandon – a multinational Iran nuclear deal from 2015, under which Iran agreed to curb its nuclear activities in return for the lifting of economic sanctions.

While Trump has threatened to reimpose US penalties next month unless the agreement’s “flaws” are fixed, Berlin proposes maintaining the existing deal with add-ons addressing Iran’s role in the region and its ballistic missile program. “The premise of Macron’s proposal is that the agreement remains in its existing form and additional elements come on top,” said another German government official.

This is the two leaders’ first meeting since last year’s G7 meeting in Hamburg after which Merkel, entering her re-election campaign, said: “The era in which we could fully rely on others is over to some extent. We Europeans really have to take our fate into our own hands.”

But she kept Berlin out of the Syrian strike. And in a bid to head off any White House sniping at Germany’s defense spending t—at 1.13 percent well short of NATO’s 2 percent target—Berlin pre-empted that criticism by announcing last week an extra €1 billion in spending on drone aircraft.

At the very least Merkel, freshly elected to her fourth term, hopes her second Oval Office meeting goes better than their first last year. Then a scowling Trump appeared to over-hear requests that he shake the German leader’s hand for the cameras.

With Macron out in front on the rapport steeplechase, Merkel allies bristle at any talk of Berlin losing out. “Macron’s was a state visit, this is a working meeting,” remarked a senior Berlin official defensively. “It makes little sense to judge visits based on their length.”