French President Emmanuel Macron has turned to an old strategy: leveraging France’s budding rapprochement with Moscow to boost its role on the global diplomatic stage. The aim is to regain clout in Europe and recoup authority at home. 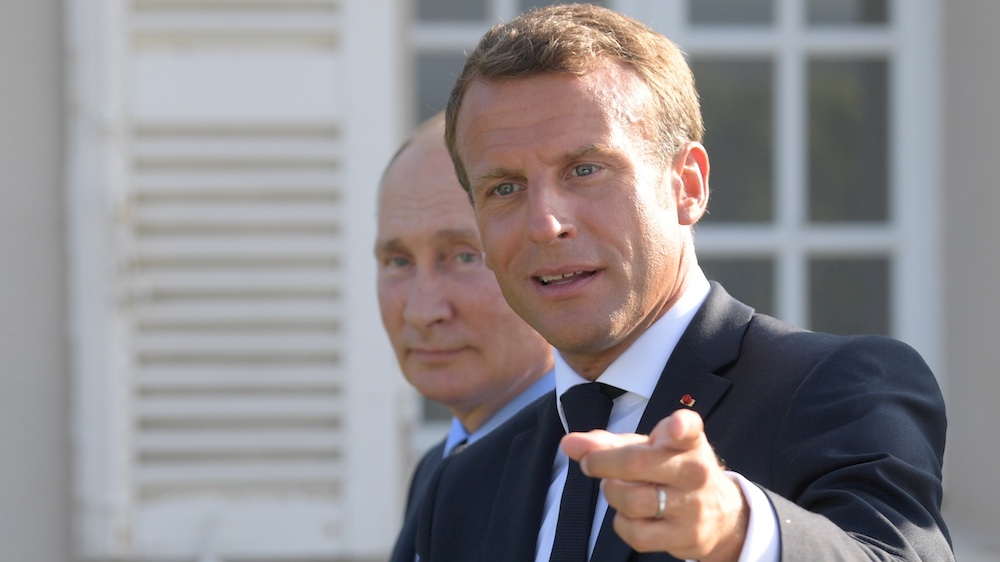 Two weeks ago, a wormhole seemed to have opened up at the Élysée Palace, transporting us back to the 1960s. Addressing France’s assembled ambassadors, Emmanuel Macron sounded at times like a 21st century Charles de Gaulle.

Fresh off his diplomatic success at last month’s G7 summit in Biarritz, the French president proclaimed: “We are not an aligned power… We need to work with our European friends, which we have to respect… But to put it in simple terms, we are not a power that considers that the enemies of its friends must also be ours.” For history buffs, that was nothing short of a direct riff on de Gaulle’s foreign policy tenets.

Once Paris had buried its imperial ambitions in the course of the 1950s and early 1960s, President de Gaulle reimagined France’s role as an independent geopolitical power, removed from the Cold War schism. “Having given independence to our colonies, we have to retake our own independence,” de Gaulle famously said in 1963. France should be a free agent on the world stage, which led de Gaulle to create the force de frappe, France’s independent nuclear deterrent. In 1966, the general ordered Washington to close its French army bases.

In the diplomatic sphere, this so-called “policy of free hands” translated into an early recognition of communist China (1964) and above all a rapprochement with Moscow. In a bid to further distance himself from Washington, de Gaulle embarked on a “Ostpolitik” avant la lettre, travelling from Kiev to Novosibirsk in 1966 and making the case for a détente. “Soviets and French, we can shake hands!” he told a roaring crowd.

It seems Paris is gearing up to embrace Moscow once again. The Iranian nuclear deal, the Syrian civil war, the stalemate in Libya and Eastern Ukraine—Russian President Vladimir Putin has made himself indispensable to resolving all these issues. Moreover, with US President Donald Trump pulling out of the INF treaty, the threat of a new arms race is returning to Europe with a vengeance. In Macron’s mind, isolating Putin simply doesn’t work anymore.

In Paris, many doubt that Macron’s overture toward Russia will yield any tangible returns. In 1966, de Gaulle did not obtain much from Soviet leader Leonid Brezhnev in return for his Soviet pivot. His diplomatic somersault was rewarded with a couple of trade agreements and a direct telephone line from the Élysée to the Kremlin.

Much like in the 1960s, Putin may simply see Macron as a “useful idiot” that might help him to break up the joint US-EU sanctions front. The Kremlin’s gambit seems to be paying dividends already: France supported Russia’s return to the Council of Europe this year.

But like de Gaulle, Macron seems to be thinking above all about his domestic audience. In 1966, the general’s triumphant Russia trip was also a giant propaganda show. It was supposed to signal that France was de retour and—perhaps more importantly—the French themselves were keen to forget the memories of the disastrous Algerian war.

Macron presented himself to French voters in 2017 as a vigorous leader who would reform the European Union and create, in tandem with German Chancellor Angela Merkel, a “Europe that protects.” Politically and fiscally more integrated, such a “sovereign Europe” would be able to resist Trump’s unilateralism and to ring-fence China’s state capitalism.

But Berlin and a coalition of northern and eastern European countries soon frustrated Macron’s ambitions. A eurozone budget was agreed on in name only, and a EU-wide tax on America’s digital giants seems dead in the water. Macron’s powerlessness in Europe became more and more visible, most of all to the French.

But by positioning himself at the center of the global diplomatic game, Macron is now attempting to recover some of his fading authority and standing at home. It seems to be working: after the G7 summit in Biarritz, Macron’s ratings reached their highest level since the start of the “yellow vests” crisis late last year.

Banking on Merkel has proven a flawed strategy for Macron. Consequently, talk of Franco-German cooperation was noticeably absent his latest Élysée speech. Instead, Macron could not help pointing out once more that Berlin is much better at organizing support for its views within the EU. His marching order to the assembled ambassadors was clear: go and strengthen France’s bilateral relations, particularly with eastern and Nordic EU countries.

It is these countries that are most worried about a rapprochement with Putin’s Russia—especially since Trump, now that his hawkish national security advisor John Bolton is out of the picture, cannot be trusted to be tough on Putin. The Baltic countries are well aware that in a crisis, France is the only EU nuclear power with a president at its helm that can send troops across the continent on a whim.

Macron is playing billiard diplomacy. By rekindling his relationship with Putin and becoming Europe’s geopolitical wheelhouse, he hopes to increase his leverage within the EU and upend the rivalry with Germany—an old trick in French foreign policy. Ironically, in a Europe where many are still reticent about further integration, Macron seems to hope that going for a walk with Putin may do more wonders than charming Merkel. If Macron is taking a Gaullist turn, he still has his sights firmly set on Europe.