The new European Commission line-up signals an appetite to take on the United States, China, and Russia using existing tools like trade and competition, and new ones like an “EU Army.” 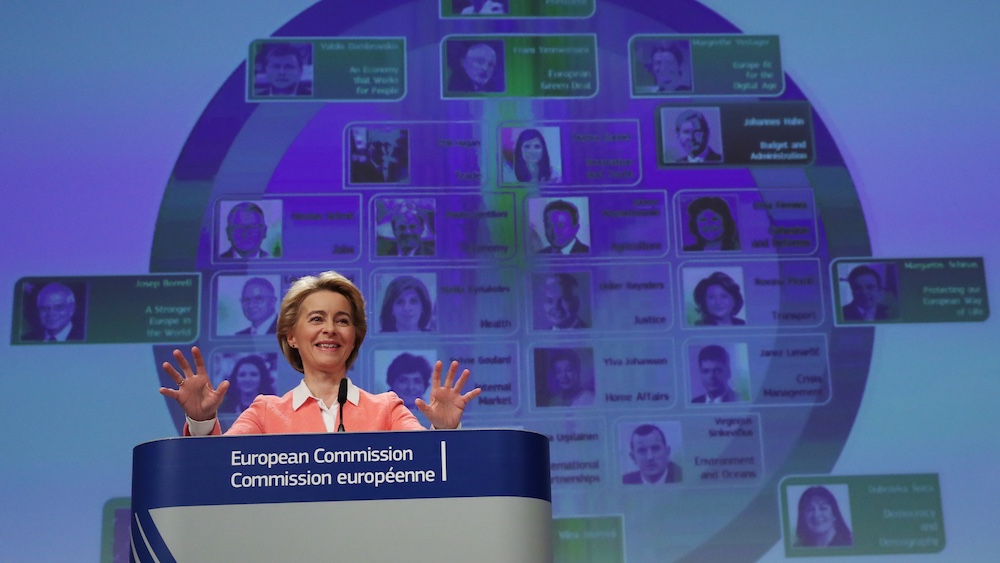 “The world needs more Europe, the world is calling for more Europe,” incoming European Commission President Ursula von der Leyen told journalists as she announced her new commission portfolio assignments. “Therefore, we have to stand up.”

With this she announced what is perhaps the most outward-looking portfolio organization in the commission’s 50-year history. It reflects a newly assertive Europe on the world stage, with the EU eager to take on rivals like China and a protector and ally, the United States, that Europeans no longer trust.

“We need to work on our technical sovereignty,” von der Leyen said of the latter combination.

Alongside them the Greek Margaritis Schinas will serve as a regular vice president (non-executive) for “Protecting Our European Way of Life.” What exactly this will entail is still unclear, and some are already complaining about its creepy connotations after Schinas announced his portfolio will include migration. “Protection from what?” one journalist asked. Are migrants threatening the European way of life?

But the intention behind this title may have been something more consistent with the themes of European sovereignty that von der Leyen is stressing. In draft versions of the portfolios, Schinas’s title was going to be “Commissioner for Defense.” According to EU sources, this was changed after EU member states objected to the idea of the commission muscling in on a national competence.

All in all, the portfolios paint a picture of a commission that is going to aggressively defend European sovereignty in the face of increasing competition and commercial ownership from China and a less and less reliable military alliance with America.

Vestager’s surprise double appointment drew gasps in the press room as it was announced. The combination signals a drastic politicization of the role of competition commissioner, a job that has until now been considered to be ring-fenced away from the Commission’s political functions.

In recent years there has been intense pressure, particularly from Paris and Berlin, for the EU’s competition policy to take into account political objectives, for instance by allowing the creation of “European champions” to take on global rivals. Vestager drew criticism for blocking a proposed merger of German Siemens and French Alstom, which could have created a “Trainbus” to see off competition from China. She responded that if they want such things to be taken into account, they need to change the defined remit of the competition commissioner.

By making Vestager both competition commissioner and vice president for digital—one of the areas which the EU has fought the United States most fiercely—von der Leyen is signaling that she is ready to change the remit. Vestager has already gone after the American tech giants—Google, Facebook, and Microsoft—and the logical conclusion of the combination is that these investigations will increase. Von der Leyen’s “technical sovereignty” comment also signals that she will push for the EU to develop alternatives to US technical products. She specifically mentioned GPS, owned by the US military, during her press conference. Europe is working on its own satellite alternative, Galileo.

In the face of Donald Trump’s attacks on NATO, the European Union drew up plans last year for an “EU Defense Union” that would pool the military resources and know-how of member states. Long opposed by the United Kingdom as the dreaded “European Army,” the idea has only been made possible with the impending exit of the UK from the EU. Contrary to many portrayals of the idea, it does not involve a single EU military but rather national militaries pooling their resources in order to be more efficient.

Most significantly, the defense union is designed to be independent of the United States, unlike NATO, which relies on America. Von der Leyen, formerly German defense minister, was at pains to defend the plan against criticism that it is meant to be a competitor to NATO—concerns which have not only come from London but also from Warsaw and other Eastern European capitals. “The European Union will never be a military alliance,” she insisted. “NATO is our collective defense, and it is the strongest military force in the world.”

It remains to be seen how Schinas will interpret his remit as vice president. Already there is talk that the European Parliament may insist the name of his title be changed back to commissioner for defense or commissioner for security. Though much of the initial reaction took his title to be saying Europe is under attack from migrants, others have interpreted it as being protecting Europe from American cultural, commercial, and military influence (for instance, from chlorinated chicken). Josep Borrell, the Spaniard nominated to be the next EU High Representative for Foreign Affairs, has had his title adjusted by von der Leyen to “Vice President for a Stronger Europe in the World.”

The defense commissioner was meant to head the new directorate-general for defence and space, a new department in the commission von der Leyen has created—alarming many national governments who see military matters as a national competence and worry it threatens NATO. Despite the commissioner name change, this department will still exist, and Schinas will be presiding over it.

Von der Leyen’s choice of the Estonian Kadri Simson as energy commissioner also maintains this emphasis on European sovereignty. Estonia is on the front line of concerns about Europe’s dependence on Russian gas, and the country has consistently urged drastic action to safeguard European energy security by diversifying supply.

Estonia, along with other Eastern European governments, has been fiercely against the controversial Nord Stream II pipeline bringing gas from Russia to Germany.

Her choice of trade commissioner—Ireland’s Phil Hogan—can also been seen as confrontational towards the UK in a post-Brexit world. He can be counted on to play hardball with London in negotiations over a future trade deal that will take place in the coming years. Currently serving as agriculture minister, Hogan has also wanted to play hard ball in free trade negotiations with Brazil, Argentina, and the United States, leaning toward provisions to protect European farmers from global competition.

The 27 portfolio nominations must now be approved by the European Parliament after confirmation hearings that will take place over the next two months. Traditionally, the parliament likes to claim at least one scalp every five years, rejecting one nominee to demonstrate its power.

After the humiliation suffered by the parliament in having to accept the rejection of the Spitzenkandidat process in July, this year MEPs may want to claim two scalps, or maybe even three. In 2014 it was quite obvious who would get blocked–Slovenia’s Alenka Bratusek. But this time ,it’s more unclear.

There may already be targets on the backs of Hungarian commissioner nominee László Trócsányi, who has been put in charge of enlargement at a time when no enlargement is anticipated. Poland’s nominee Janusz Wojciechowki, put in charge of agriculture, may also face a rough ride.

If all goes smoothly, von der Leyen and her team will take office on November 1. But as the incoming president noted today, it’s not up to her whether the process will be done by then. “I’m not the one deciding on timelines. MEPs will decide when they’ve heard enough,” she said.