The German defense minister has squeaked through by just nine votes. But it is the EU institutions, and not Von der Leyen, who are to blame. 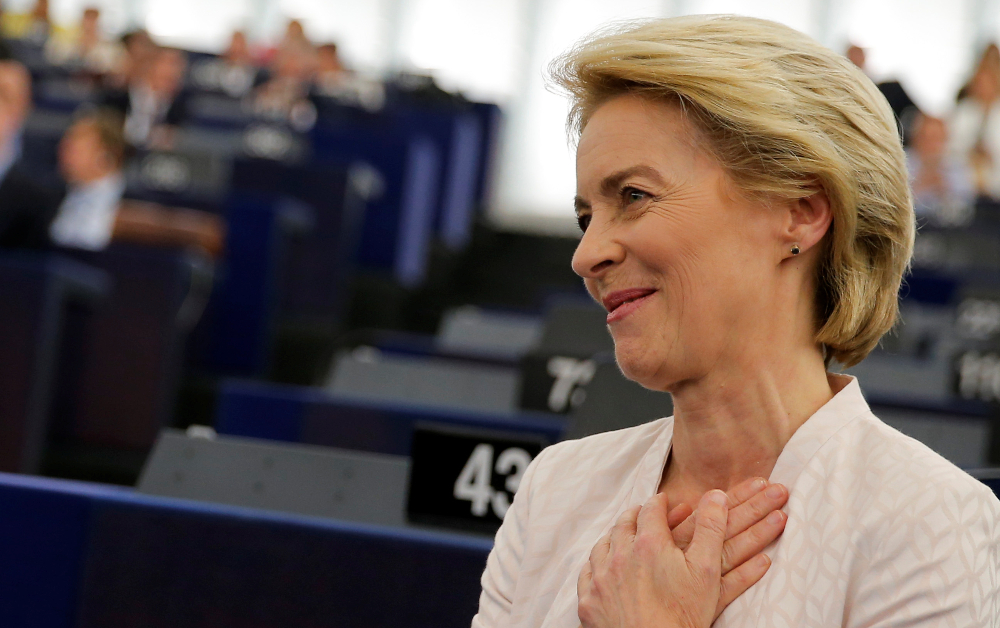 After a traumatic two months of fighting between the European Union’s institutions and political groups, it all came to an end last night. The European Parliament voted to confirm German Defence Minister Ursula von der Leyen as the next President of the European Commission – but by a margin of just nine votes.

The result was uncertain right until the last moment, with MEPs across the political spectrum still angry that the prime ministers of the European Council had ignored the Spitzenkandidat system of injecting democracy by running presidential candidates in the EU election. The national leaders chose non-candidate Von der Leyen at a marathon Brussels summit two weeks ago. The center-left Socialists & Democrats group was particularly angry because their Spitzenkandidat, Frans Timmermans, was rejected by a coalition of right-wing and center-right EU leaders.

So when the S&D announced two hours before the vote that it was joining the center-right EPP and the Liberal Renew Europe in endorsing her, it was assumed she would pass by a healthy majority. But this was a secret ballot, and things did not go as planned.

A sizable number of MEPs in those three centrist groups – the three largest in the Parliament with 443 sets between them – must have voted against her. Because she ended up with just 383 votes.

Worst still, the pre-announced voting intentions of populist parties not in those groups means the number of pro-European centrists that voted for her was even lower still. The 14 MEPs in Italy’s governing Five Star Movement, 26 MEPs in Poland’s governing Law and Justice, and 13 MEPs in Hungary’s governing Fidesz all said they voted for her.

The reason is that their three prime ministers had supported her nomination at the European Council Summit, after fiercely opposing the nomination of Timmermans, who as Commission Vice President has opened punishment procedures against Poland and Hungary for rule of law violations. Following that summit, Orban bragged in Hungary that he and his illiberal allies had “won” the summit by blocking Timmermans and choosing Von der Leyen.

That Europe’s right-wing populist forces were rooting for Von der Leyen may seem odd, given she is an avowed federalist who wants to see a “United States of Europe” and ever-closer union. Indeed, on paper there is little for them to like about her. During her speech to the Parliament yesterday she said she would continue the Commission’s efforts to go after those EU countries where the rule of law violations are occurring, though she would not mention Poland and Hungary by name.

And yet, she will know that she owes her Commission presidency to the governing parties of Poland and Hungary – not just for her appointment in the Council, but also for her confirmation in the Parliament.

Asked about that uncomfortable reality in a press conference following her confirmation vote, she did not confront the implications head on.

“I don’t know who voted for me,” she told journalists. “I know it was very difficult to achieve a majority. But I think today the most important question was giving a speech which reflected my convictions, a pro-European speech, but one in which there was an attempt to find a solution to the divisions that exist between West and East.”

“A majority’s a majority in politics,” she added. “I didn’t have a majority when I came here two weeks ago, people didn’t know me. And as I can understand, there’s a great deal of resentment surrounding the Spitzenkandidat process.”

But the result gives credence to an idea put forward by the Greens, fresh off an election victory in May, that Von der Leyen will owe her commission presidency to the right-wing populists. Orban himself is likely to trumpet the parliament vote result in Hungary as another win for his party, as he did after the Council summit. Whether or not the Commission president actually feels beholden to him, the impression will be there.

Von Der Leyen’s backers were at pains last night to stress that the historic opposition to her in the Parliament was not about her as a politician but rather about the process in which she was appointed – something for which she bears no guilt. On this, they are correct. Indeed, some of the MEPs who voted against her said as they were leaving the chamber that despite their vote, they liked her very much. It was about the principle of defending the integrity of the European Parliament, which the Council had insulted by ignoring the Spitzenkandidaten.

One thing that everyone could agree on last night was that they were glad the ordeal is over. But the Parliament has emerged badly weakened. And in an act of revenge, they have weakened Von der Leyen as she starts her term.

One thing is clear – the Spitzenkandidat system for allowing voters a say in choosing the Commission President is dead.

Von der Leyen has promised the Parliament she will work to develop a new system for democratically selecting the Commission president in time for the next EU election in 2024. She said it will incorporate transnational lists, something pushed for by French President Emmanuel Macron but rejected by her center-right EPP Group in a European Parliament vote last year.

In the end, it will not be her decision to make. That will be up to the 28 national leaders of the EU, who under the treaties retain the sole right to nominate a Commission President. They never signed up to the Spitzenkandidat system; it was an invention of the European Parliament that wasn’t grounded in law. But they gave in to pressure in following it the first time it was used in 2014, to appoint EPP candidate Jean-Claude Juncker.

With Macron strongly opposed to the system this time around, the Parliament and Council never reached an agreement before the election on whether to use it. The Parliament decided to go ahead and run it anyway, thinking they could pressure the Council again as they did in 2014. It didn’t work out that way, and the failure of communication between EU institutions resulted in the ugly process that has played out over the past two months.

Now, the EU has a Commission president who is starting to look less like a compromise candidate and more like a compromised candidate. The Parliament has been left humiliated and angry, while the Commission has been left with a leader who risks being seen as illegitimate. In time, Von der Leyen’s historically narrow confirmation may become but a distant memory. But for now, it has exposed some of the EU’s worst decision-making flaws at a time when it can least afford such a blow to its reputation.