By choosing Ursula von der Leyen, a non-Spitzenkandidat, the European Council has thrown down the gauntlet to the European Parliament. If she is approved, it will kill the process in which voters have a say about who gets the EU’s top job. 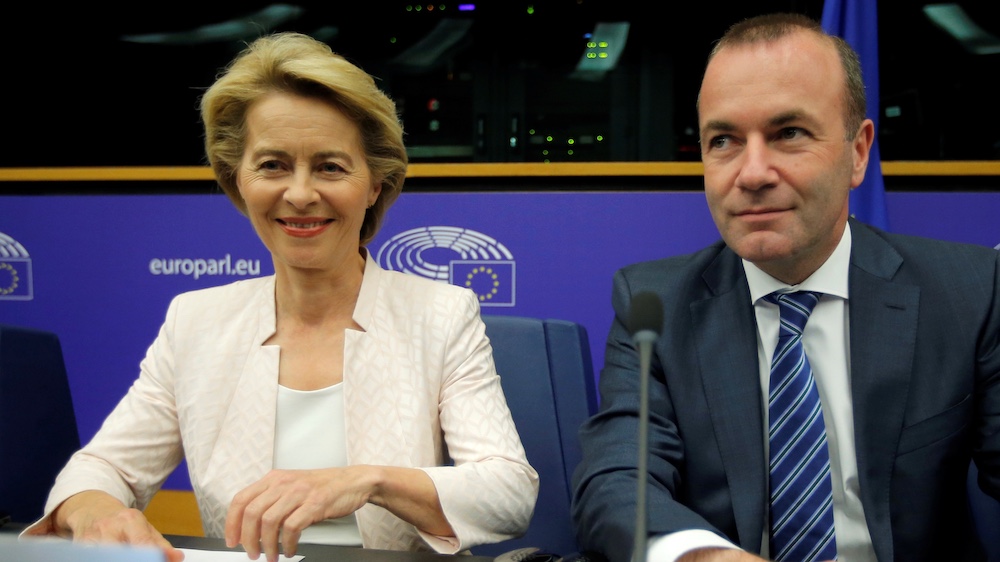 The 28 national leaders in the European Council have made their choice for the next European Commission president: German defense minister Ursula von der Leyen. But she will still need to be approved by the European Parliament. And with MEPs angry over the Spitzenkandidat process being abandoned, this is very much in doubt.

The choice came after three straight days of protracted and tense negotiations. The process of appointing the EU’s top jobs for the next five-year term was made more complicated by the fractured result of May’s European Parliament election. For the first time, the main center-right and center-left political groups, the European People’s Party (EPP) and the Party of European Socialists (PES), did not win enough seats to form a majority between them. That complicated the usual division of the spoils between Europe’s two main blocs.

The conflict was not only political, it was also institutional. For the second time, the so-called “Spitzenkandidat process“ was used in this year’s European elections—a system by which the political groups put forward lead candidates for Commission President ahead of the election. Those candidates campaigned across Europe and held debates with each other. The idea was to give voters a choice, with the candidate who was able to garner a majority in the European Parliament getting the job.

But the European Council, the body of the EU’s 28 national leaders, has never been a fan of this system. It takes power away from them and hands it over to the European Parliament. When it was used for the first time in 2014, it was strongly opposed by British Prime Minister David Cameron. But given the UK’s lack of influence in the EU, Cameron’s vote against Juncker was simply ignored. This time around, it was French President Emmanuel Macron who came out strongly against the system. He was even able to convince the ALDE group of Liberals in the European Parliament to come out against it also, as a condition for him taking his En Marche MEPs into an alliance with them.

A majority of MEPs in the European Parliament had threatened to reject anyone nominated by the council who was not a Spitzenkandidat during the campaign, and this threat was reaffirmed in statements from the main groups shortly after the election.

One of the elements that caused the delay in the council’s deliberations (this was in fact the third summit to discuss the issue held since the elections) was the question among EU leaders over whether the parliament would make good on its threat. For most of the negotiations on Sunday and Monday the leaders discussed a package devised by Merkel and Macron that would see Frans Timmermans, the candidate of the PES, become Commission President. But moderate EPP leaders such as Ireland’s Leo Varadkar opposed Timmermans—together with Hungary’s Viktor Orbán, whose Fidesz party is presently suspended by the EPP, and Poland’s Mateusz Morawiecki—demanding that the position stay under EPP control. It is a sign of Merkel’s waning power that she was not able to contain this rebellion within her political family.

And so, the council moved on to other ideas. According to EU sources, it was Macron who first suggested Ursula von der Leyen as a compromise, an idea which was quickly embraced by Hungary and Poland. As part of the package, the Council Presidency will pass from the EPP to the Liberals with Belgium’s Charles Michel and Christine Lagarde, a center-right former French finance minister and current head of the International Monetary Fund, will become the new president of the European Central Bank.

Though the European Parliament President is usually the fifth job in the horse-trading mix, this year the council leaders announced they would graciously let MEPs decide for themselves who they would like to be their president. It was perhaps a gesture meant to mollify the anticipated anger of MEPs at having the Spitzenkandidat system killed.

But even this gesture was undermined when, during her press conference, Angela Merkel said she “advised” the parliament to choose a center-left MEP to give political balance. The parliament dutifully obliged today, with center-right and center-left MEPs voting to confirm Italian Social Democrat David Sassoli as Parliament President for the next half-term.

The outcome was a foregone conclusion from the start, because the EPP’s Commission President nominee Manfred Weber withdrew from the parliament race yesterday, leaving the EPP with no candidate. This is the same outcome as in 2014, when German Social Democrat Martin Schulz was made president for the first half of the last term.

The gauntlet has been thrown down, and the ball is now in the parliament’s court. Will it make good on its threats, or back down? The latter would result in a significant loss of its credibility as an institution. Why should anyone believe threats the parliamentarians make in the future?

EPP MEPs are sure to vote to confirm von der Leyen, along with the European Conservatives and Reformists (ECR) group, dominated by the Polish. The Liberals are also likely to back the package. But that is not enough for a majority. If the PES teams with the far-left GUE group and the Greens to vote no, combined with the presumed no votes of the euroskeptic and far-right MEPs, this would be enough to reject von der Leyen.

Outgoing Council President Donald Tusk will travel to Strasbourg on Thursday, and he will be in damage control mode. He will have to offer a concession to MEPs in exchange for them swallowing their pride and conceding defeat on the Spitzenkandidat system. That could possibly be done by promising that a new system for democratically choosing the EU Commission President will be invented before the next EU elections in 2021.

Perhaps they will take up Macron’s idea of establishing trans-national lists, putting the presidential candidates on the ballots across Europe. The existing system mirrors parliamentary democracies, where a vote for the political group implies a vote for that group’s leader.

The confirmation vote is set to take place at the second parliament plenary session in Strasbourg in mid-July. There will be intensive talks among MEPs until then to discuss how to respond to this institutional insult.