For the first time in over 50 years, a German has been nominated as President of the European Commission. Yet Ursula von der Leyen’s loudest critics are back home. 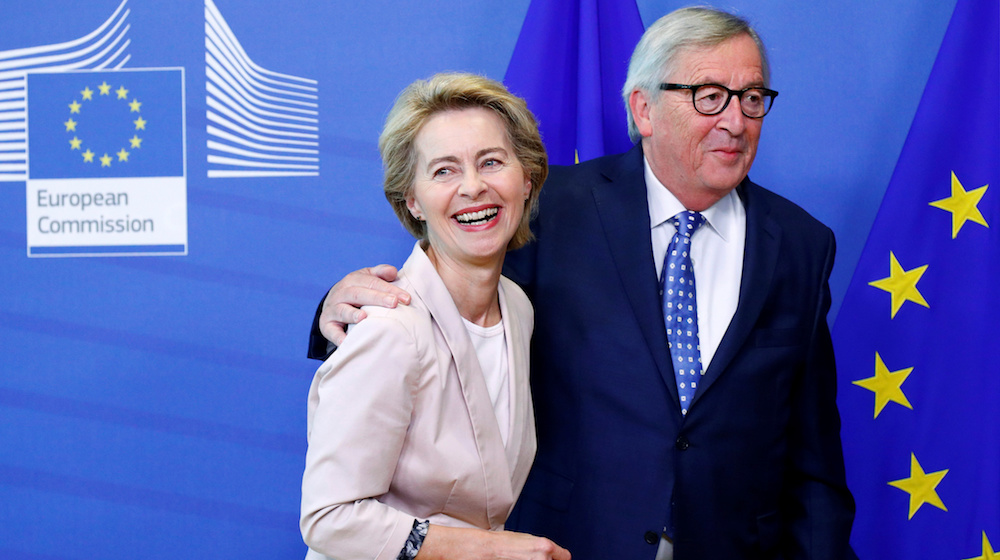 Less than 24 hours after being nominated as the new president of the European Commission, Ursula von der Leyen, until now Germany’s minister of defense, began her battle for acceptance. On a flying visit to Strasbourg, von der Leyen met with the European People’s Party (EPP), the largest group in the European Parliament.

“It’s here in the European Parliament that the heart of European democracy beats, and that’s why it is so important to immediately start the dialogue,” von der Leyen said. Time is short for her charm offensive: the confirmation vote in Strasbourg has been scheduled for July 16. Von der Leyen must persuade 376 out of 751 deputies to approve her, an absolute majority, with no second chance.

It will be an uphill battle. But the main reason is not what you would expect. It’s not that other Europeans fear that von der Leyen’s confirmation would cement German dominance over the EU. No, it’s actually the Germans themselves who most fiercely oppose her—the first German politician since 1967 to be nominated as president of the European Commission.

An absurd situation in many ways: In the European Council, von der Leyen’s nomination was approved by every government leader’s vote, except Chancellor Angela Merkel’s. She was forced to abstain because her own coalition could not agree to support this German candidate.

Many Germans disapprove of von der Leyen because of her mixed record as defense minister. Others do for reasons of European democracy. With her nomination, EU leaders trashed the European Parliament’s Spitzenkandidat system (leaders were only supposed to choose from among the lead candidates standing at the recent European elections). Both are valid reasons. Yet mixed into them is also an astonishing amount of personal antipathy for the only minister who has served with Chancellor Angela Merkel since her first term in 2005.

Just look at her CV. She was actually born in Brussels. Her father, Ernst Albrecht, had a European career before eventually becoming premier of the state of Lower Saxony. She speaks fluent French and excellent English, having studied in Britain and the United States. She also managed the unbelievable feat of having seven children while training and working as a medical doctor.

In terms of politics, her references are just as glowing. Von der Leyen is a passionate European, a conservative modernizer, a forceful advocate of gender equality, skillful at building a network of friends and contacts throughout Europe and the North-Atlantic community. She has been unfailingly loyal to Merkel while also fostering a close friendship with Wolfgang Schäuble, a powerful CDU grande and Merkel skeptic.

Bad Vibes from the Coalition

And yet Ursula von der Leyen is disliked by many. From the very start of her political career, she raised hackles. Maybe she is just too picture perfect at combining a career and a family. Maybe it’s her background as an affluent aristocrat. Maybe it’s her voice that comes across as a bit nannyish or that she has a reputation being distant and even cold. Whatever it is, it is there—and it makes her long and successful political career all the more remarkable.

These bad vibes have turned political criticism into vitriolic attacks against von der Leyen’s nomination—not just by Germany’s opposition parties, but from within Merkel’s government, too. Even her own Christian Democratic party did not support her unanimously. The Werteunion, an ultra-conservative group, said the fact that “an unsuccessful minister” was being promoted that way was “a sign of the repeated failure of the chancellor’s foreign policy.”

“Democracy has lost,” said Markus Söder, the head of the Christian Social Union, the CDU’s Bavarian sister party, who is peeved that his fellow party member Manfred Weber, who had been the European People’s Party’s Spitzenkandidat, was rejected by the European Council.

The sharpest words came from the German Social Democrats, Merkel’s junior partner in government. Former Foreign Minister Sigmar Gabriel called von der Leyen’s nomination an “unprecedented piece of political trickery” and said this was sufficient reason for the SPD to walk out of the government. Katarina Barley, newly elected leader of the SPD deputies in the European parliament, declared that she and many of her colleagues would not vote for von der Leyen.

The SPD, of course, has enormous problems of its own. The party has no leader and no idea how to stop its freefall in the polls; it is also divided about whether to stay in the government coalition or try to recover as an opposition party. Failures and scandals at the defense ministry—including an ongoing parliamentary enquiry into the ministry’s use of consultants that could have become dangerous to von der Leyen as minister—are a welcome distraction.

In domestic terms, von der Leyen’s career had reached its apex. While she survived the defense ministry for longer than most of her predecessors, the length of her stint there—nearly six years—also means that she is being made increasingly responsible for the equipment failures, procurement snafus, and personnel shortages that plague the Bundeswehr. Any hope she may have had to be nominated Merkel’s successor as chancellor have long evaporated.

Still, von der Leyen was smart enough to keep quiet about any hopes for a big job in Brussels. To have French President Emmanuel Macron propose her as Commission president must have come as a godsend. And while she cannot do much about the dislike she frequently evokes in Germany, she can work on winning over European minds and hearts.

In terms of policies, this means at least two things: should von der Leyen become Commission president, she cannot afford to be soft on possible rule-of-law infringements by EU member states like Hungary or Poland. Those were the governments that successfully derailed the nomination of the Social Democratic Spitzenkandidat Frans Timmermans.

The second element concerns the need for democratic reform: precisely because von der Leyen was not selected through the Spitzenkandidat process, she will need to find ways to reestablish it in the future. At her initial visit with the EPP group in Strasbourg, von der Leyen made a big promise. “Over the next few years, we will be developing a Spitzenkandidat model which will be supported by the Council, by all member states and by all members of Parliament,” she said according to a news report by Politico.

Will this be enough? It just might, particularly as the parliament is painfully conscious of its own failings. EU leaders could only settle on an outside candidate because over the past six weeks, none of the Spitzenkandidaten emerged with a workable majority in parliament. If it does, it will be a double victory: for von der Leyen herself, but also for Angela Merkel, who will have opened the way to the first German president of the Commission in over 50 years and the first woman in that job ever.