At a time when Europe’s conservatives are divided between Angela Merkel’s center-right and Viktor Orbán’s hard-right, Manfred Weber is bidding to be the EU President to unite them. 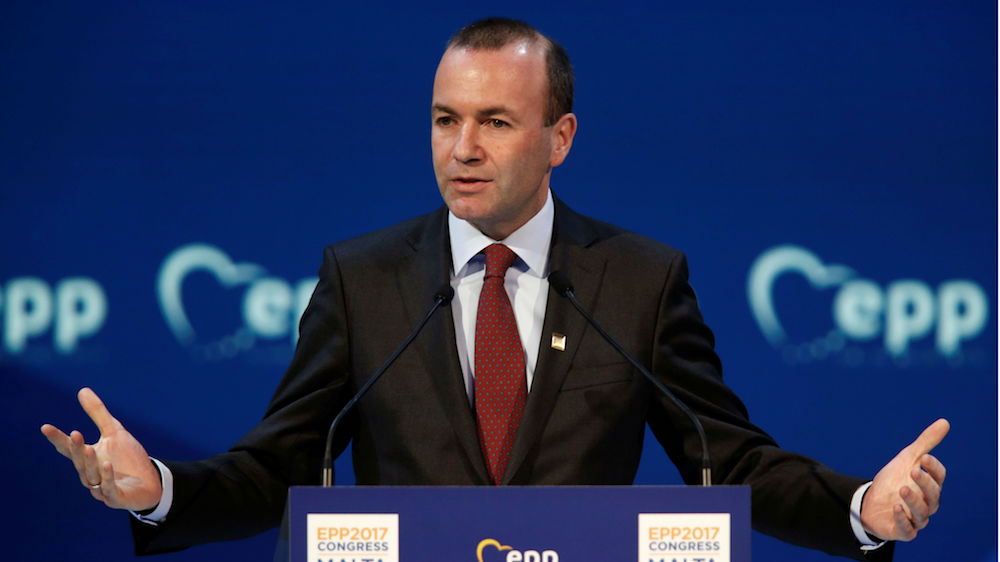 During his time in the European Parliament, Manfred Weber hasn’t struck many as being presidential material. The mild-mannered leader of the European Peoples Party (EPP), the parliament’s grouping of center-right parties from across the European Union, isn’t known for taking bold stances, or for delivering fiery speeches.

Instead he is known as a bridge builder, and this was the characteristic he chose to highlight on Wednesday when announcing his candidacy to become the EPP’s nominee for the next President of the European Commission, the EU’s top job.

“I will listen, I will try to manage a compromise and then I will lead, this is what I did as a group leader,” he told journalists at a press conference in Brussels. “I want to build up bridges, because I deeply believe that only together we can be strong, otherwise Europe has no chance in today’s world.”

The battle will be waged in just nine months at the next European Parliament election when, under the “spitzenkandidat” process, the nominee of the European political group who wins the most seats will (in theory) become the next Commission president, a position currently occupied by Jean-Claude Juncker. The EPP, the largest group in the parliament, will select its nominee at a convention in November.

Weber’s skill in straddling a middle ground is reflected in his motley crew of allies. A confidant of Angela Merkel, he received the German Chancellor’s endorsement to be EPP nominee right away. But another, more surprising endorsement may be coming soon—that of Hungarian Prime Minister Viktor Orbán.

Orbán has been a vocal critic of Merkel during the refugee crisis. In recent months he has delivered speeches suggesting he may lead a revolt within the EPP and take his and other hard-right parties out, linking up with parties such as Poland’s Law and Justice (PiS) and Italy’s Lega, which have been considered too far-right for the EPP.

There has even been suggestion that the CSU, the Bavarian sister party to Merkel’s CDU, could leave the EPP and join Orban’s new hard-right European alliance—while staying allied with the CDU domestically.

It is perhaps no accident then that Merkel has chosen to throw her weight behind Weber, a deputy chairman of the CSU. He is a politician representing a Central European brand of conservatism who, like Chancellor Sebastian Kurz in neighboring Austria, is trying to find a middle ground between the nationalist and anti-liberal rhetoric of Orban and the pragmatic pluralism of Merkel.

This has often involved cozying up to the Hungarian prime minister. In July 2013, when the European Parliament’s civil liberties committee issued a report criticizing the erosion of fundamental rights in Hungary, Weber dismissed it as a politically motivated attack against Orbán by leftist parties. He also defended Orbán earlier this year after the prime minister said he had replaced liberal democracy in Hungary with “21st-century Christian democracy,” saying Orbán is “not a bad European.”

Weber has often parroted the anti-migrant language of Orbán as well, calling on Europe to maintain its fundamental Christian values. In April, Weber tweeted a photo of a Catholic church with a quote from himself saying, “If we want to defend our way of life we must know what determines us. Europe needs a debate on identity and dominant culture.” He has said the EU should enact a total ban on face coverings in the bloc.

Weber was the lead MEP on the EU’s 2008 migrant return directive, and fought hard for interior countries like Germany to have the ability to send migrants back to their country of origin, something that won him favor within the CSU and particularly with its current leader Horst Seehofer, another Orbán ally and a critic of Merkel.

But for those made uncomfortable by Weber’s ethno-nationalist flirtations, he has veered from Orbán’s politics in his steadfast defense of European integration. In June 2014, as Britain’s then-Prime Minister David Cameron came to the EU demanding an end to integration, Weber responded emphatically. “The EU is based on an ever-closer union of European peoples,” he said. “That is set out in the treaties. It is not negotiable for us. We cannot sell the soul of Europe.”

Such strong defense of the European project have won him fans in the more moderate wing of the EPP. It is this balancing act that Weber hopes will make him the nominee the EPP needs at a time when political tensions are threatening to break it apart.

He was at pains to please both sides of the EPP divide in his tweets announcing his candidacy on Wednesday. “Europe is at a turning point,” he said. “Today, it’s about standing up for Europe …, because we are being attacked from outside and from within. It’s about the survival of our European way of life.”

However, there are many forces that will work against Weber. Rather than endearing him to both sides, Weber’s fence-sitting could serve to alienate both sides of the party—turned off by either his anti-migration rhetoric or his warm words for further European integration.

He will likely face at least two tough challengers for the EPP nomination—Michel Barnier, the EU’s Brexit negotiator who lost the EPP nomination to Jean-Claude Juncker in 2014, and Alex Stubb, the former Finnish prime minister. Both are expected to also throw their hat in the ring.

Even if he does get the nomination, the biggest battle may be after the election. The national EU leaders in the European Council, which under the treaties have the real right to appoint the president, have said that the Council will not be bound by the spitzenkandidat system. French President Emmanuel Macron has been particularly opposed to the idea, saying the EU erred in 2014 by going along with the new system being pushed by the parliament.

So if he gets the nomination, Weber may find himself having to bridge the greatest gap yet—that between the European Parliament and the European Council.