Home Eye on Europe All Eyes on Rome

Italy is barreling toward a crucial national election where everything appears possible. One familiar face in particular stands to gain—Silvio Berlusconi. 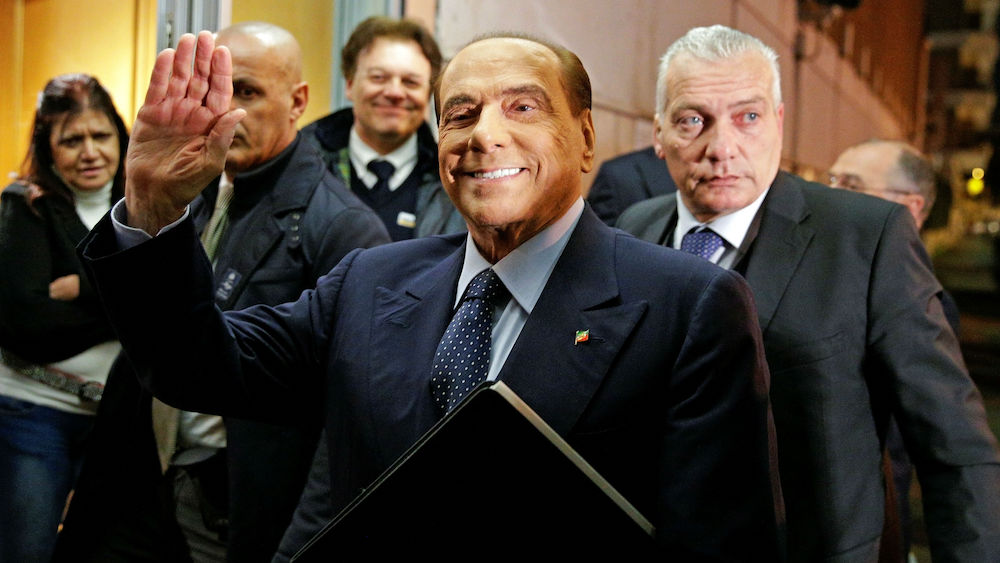 The only thing observers of Italy’s national election campaign can agree on is that whatever the outcome of Sunday’s vote, Silvio Berlusconi, the country’s scandal-tainted four-time former prime minister, will likely play a pivotal role in the next government.

In this most unpredictable, divisive, and complex of election races, the 81-year-old billionaire’s center-right coalition, made up of his Forza Italia party and two far-right groups—the League (formerly the Northern League) and Brothers of Italy—had the edge in opinion polls before the black-out period began on February 17.

But who will be leading the country after March 4 is anyone’s guess. Neither of the three main contenders are expected to reach the requisite 40 percent majority to form a government.

Polls suggested that the populist Five Star Movement (M5S), which snatched the second-largest share of the vote in the 2013 elections, will emerge as the single biggest party with around 30 percent. M5S has long railed against alliances, but true to its ability to switch political stances with ease, it now says it’s open to forging post-election partnerships with other parties on condition they abide by the Five Star’s program.

Meanwhile the incumbent center-left Democratic Party, led by former prime minister Matteo Renzi, was lagging behind in third place before polls closed. The party, credited with bringing a modicum of economic and political stability back to Italy in recent years, has been riddled with strife ever since Renzi was forced to resign on the back of a failed referendum on constitutional reform in December 2016.

The 43-year-old is also striving for a comeback in this election, although his appeal has long diminished, with many voters perceiving him as arrogant or even a replica of Berlusconi. Complicating matters are the 10 million undecided voters.  Discontent in Italy’s political system runs deep.

With all this in mind, most analysts forecast a hung parliament.

“Looking at projections, it seems quite likely that the election will not produce a clear, coherent majority, at least not immediately,” said Federico Santi, a political analyst at Eurasia Group. “They all seem to be short of the numbers needed to form a government, although could probably be within reach of that threshold.”

The Italian political system allows parties to cast aside previous loyalties and form new partnerships to make up seat numbers after the vote—and this also means the electorate is unlikely to get the government they selected.

Immigration has dominated the campaign, largely driven by the League and its junior ally Brothers of Italy. “This has been the election about security and immigrants,” said Mattia Diletti, a political professor at Rome’s Sapienza University. “That is why Matteo Salvini [the League’s leader] is so strong. For the last five years he has been talking about only one thing—immigrants.”

Both the League and Brothers of Italy have been crusading on an “Italians First” platform, taking aim at the thousands of migrants who have landed on Italy’s southern shores in recent years.

But supporters have been duped into believing the duo is concerned about the country’s future prosperity. “I don’t think they really care about poor Italians as their flat-tax proposal, for example, goes against poor people,” added Diletti. “Having a flat-tax means not having any money to keep social services alive. Plus, the Northern League has a lot of support from small business owners, not exactly poor people, while those who support them in poorer areas do so because of the immigration issue.”

The immigration debate took a toxic turn in early February when 28-year-old Luca Traini injured six African migrants in a racially-motivated shooting spree in the central city of Macerata. Traini had been a failed candidate for the Northern League in local elections last year. Extremist violence and a rise in racist attacks have also marred the campaign in recent weeks.

Berlusconi, previously seen as the master who could keep his far-right partners in check, fanned the flames the day after the Macerata attack by pledging to deport 600,000 migrants. The Northern League followed suit with a similar promise.

Even though the partners have been useful to each other in shoring up support, it remains to be seen if the coalition will remain intact after the vote, particularly with tensions brewing between Berlusconi and Salvini. Forza Italia had the edge over the League in polls; if this is maintained, Berlusconi, who is banned from running for office until 2019 due to a tax-fraud conviction, would have the power to pick the coalition’s prime minister. But as the vote nears, there are concerns that the League could even eclipse its partner.

“This possibility should be taken into account,” said Santi. “At that point Berlusconi is more likely to lean toward the center-left and go for another grand coalition, which is basically the same coalition that has been in power since 2011.  It will be difficult to explain that to his voters, it all depends on the result. But I struggle to see him taking orders from Salvini.”

Pundits have also mooted the possibility of M5S teaming up with the League. Although Five Star leader Luigi Di Maio has ruled out such an option, the two parties are more closely aligned on issues like immigration. With the exception of the League, which has threatened to pull Italy out of the EU, Europe has been a non-topic, although officials in Brussels are said to be hoping for a grand coalition of pro-European parties, namely an alliance between Forza Italia (Berlusconi) and the Democratic Party (Renzi).

In the event of gridlock, there is also the possibility of a repeat election within six months to a year. Such a scenario is backed especially by Berlusconi, who will be free to run for the premiership next year. “He didn’t plan it this way in the beginning but now he thinks he can win anything,” said Diletti. “Whatever happens, he will be in a strong position.”