Home Berlin Observer “The Greens Are Now Under Enormous Pressure”

After the Greens’ success in the European elections, Fridays for Future activist LUISA NEUBAUER spoke to Berlin Policy Journal‘s Noah Gordon about what’s next for the climate protection movement. 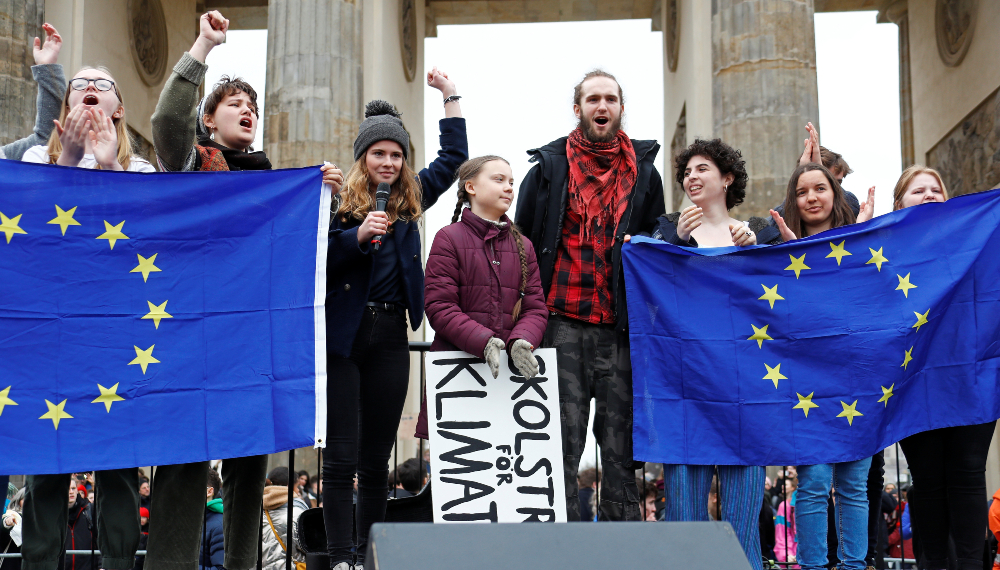 The European elections were a success for the Greens, particularly in Germany, where voters perceived climate as the most important issue. But the elections also saw, in Italy and Poland, gains for parties that oppose rapid climate action. How did Fridays for Future (FFF) react to the results? We see, especially in Germany, that the European elections were indeed climate elections, which we were working toward. And we saw that voters made sure that parties not only see the urgency on the street but feel it through the results. That’s absolutely essential, a crucial step in the emergence of a movement. While, of course across, Europe we see Green parties emerging in various countries, right-wing populists and climate deniers also gained momentum, which is worrying in a lot of ways.

The German Greens seem to be on track to be part of the next government. Do you trust them to do enough to work against catastrophic climate change? Well, we’ll see. On the European level, the Greens have a solid track record of voting for the climate. This could be improved in many senses, but it is, in some respects at least, outstanding compared to other parties. The Greens are now under enormous pressure, and they’re well aware of that. And they will have to show that they’re able to actually act upon those expectations. We will make sure the pressure remains high.

On the other hand, the right-wing populist Alternative für Deutschland (AfD), which denies climate change, was the strongest force in Saxony and in Brandenburg. Why is climate change perceived differently in those eastern German states, and is FFF weaker in that region? Yes. The eastern part of Germany is still lacking infrastructure and suffering from an enormous outflux of people. We are much weaker in that area, as most civil organizations are. In particular in those regions where there are very few people, there is a strong coal industry. So people are really living off coal and hence often oppose what we are asking for. I also see that other issues dominate the discourse, and while there’s less talk about environment and climate issues, there’s much more conversation going on about refugees and migration, for instance.

You recently tweeted that politicians can win over young voters not by wearing hoodies, but with good policies. Is the communication from the ruling coalition sometimes patronizing? Absolutely, in every sense.

Because they tell you things like you should strike on weekends? Well, they tell us that we young people surely have a right to demand climate justice, but perceive us as young people who are, you know, not patient enough in their understanding. While they are really the ones who are not understanding what’s going on with the planet, and that it’s their job to act. Which again brings us back to the power of these elections, where those politicians who have been patting us on the shoulder for months, saying, “You should go back to school and we will take care of this; we’ve heard you” are now really feeling the anger of not just young people but of a society that demands climate action.

This brings to mind the interview you and Economy Minister Peter Altmaier gave DER SPIEGEL. Two well-informed people had completely different readings of Germany’s climate progress, almost as if they were reading different statistics. How do you explain those different interpretations? Well, Germany has from the outside been considered a Klimavorreiter [climate trailblazer] in international terms. With the kickstart of the Energiewende [energy transition], that was in some cases justified. But it has been shifting drastically throughout the past years. From being a former Klimavorreiter, we have moved to become a climate laggard. We are now blocking on a European level; we are missing our own climate targets; and we are really a good example of a rich country that lacks the political will to take up its responsibility.

At the recent Petersberg Climate Dialogue, German Chancellor Angela Merkel expressed support for achieving net-zero emissions by 2050. Yet Germany will miss the 2020 climate targets it set for itself in 2007, and she has been chancellor the entire time. What is Merkel’s climate legacy? That’s a very good question. She now has the chance to hugely change her legacy, or to hugely push it toward a brighter outcome. But right now, Merkel’s climate legacy will mostly be the kickstart of the Energiewende, and then the, well, the missed opportunities to introduce a socially sustainable coal exit, to rise up to Germany’s international and global responsibilities, to actually take up a lead role in climate politics worldwide—which we could have taken, and is now mostly empty, apart from [French President Emmanuel] Macron making a few declarations, such as the EU net-zero proposal for 2050. And we are about to crash the Paris agreement. If countries like Germany don’t start acting, we can throw Paris out the window.

So the Klimakabinett is meeting today, and Environment Minister Svenja Schulze is pushing ahead with her climate bill, which would make Germany’s national climate goals legally binding, and make ministries responsible for cutting emissions in their sectors of the economy. Will this bill get Germany’s climate policy on track? It would have to be a wonder bill with superpowers to get us back on track, but you know, who knows! The debate is definitely changing, and we see a much more active civil society and a political arena engaging in the climate debate. Climate has risen to become a priority topic for political dialogue. What is crucial: the bill discussed today is likely to be way too weak to actually change the game. Ministers are complaining about having to reduce emissions in their respective sectors, and the environmental minister is backing off in many cases. We will see what the outcome will be, but it’s going to be tough. We hear they’ve now stopped discussing a CO2 tax, which is considered one of the most effective mechanisms to reduce emissions, and they are looking more into CCS technologies. We know that those can be a part of the game, but they are a nice-to-have gadget and not at all as necessary as a quick coal-phaseout or a carbon tax.

One of the FFF demands for 2019 is to abolish fossil fuel subsidies in Germany. The production of fossil fuels alone receives €2.2 billion in subsidies a year. Shouldn’t cutting these be low-hanging fruit, to take German energy company RWE or other polluters “off welfare,” so to speak? Absolutely. Just like, you know, telling them to shut down one of the dirtiest coal mines, which is not even making any profits anymore. But RWE is ruling parts of the country—at least it feels like that—and with politicians kind of working together with RWE, rather than creating the laws to restrict them where necessary, we are never going to get anywhere.

The FFF program also says your demands should be realized in a “socially acceptable manner and under no circumstances only at the expense of people with low incomes.” So what’s the best way to do that in Germany, e.g. for the coal miners who have to eventually lose their jobs in any realistic pathway to 2 degrees warming? Is it a carbon tax like in Switzerland, where the dividends are in part redistributed to citizens? There are millions of different mechanisms and I think it’s up to policy experts to look through them and find out what’s the most effective and sustainable way to move forward. We as FFF see ourselves as being in a position to ask the government to act and refer to scientists and experts to find the best way to go ahead. Saying that you can’t protect the climate because of jobs just means that you haven’t understood what this is about. We have to save and protect the climate—bottom line, that’s it. Jobs, incomes, costs, technologies, these are all to-dos on our list. This is how it works, and this is what we have to get going with.

The interview was conducted by Noah Gordon.

The FFF movement, in cooperation with activists from 15 countries, is organizing a strike in Aachen, Germany, on June 21, to protest what they consider the biggest CO2 source in Europe, the Tagebau Garzweiler mine. It has also called for a worldwide strike on September 20.

A profile of Luisa Neubauer can be found here.