The much-heralded far-right alliance of Marine Le Pen and Matteo Salvini isn’t much different from the alliance they’ve already had for several years. It’s just been renamed. 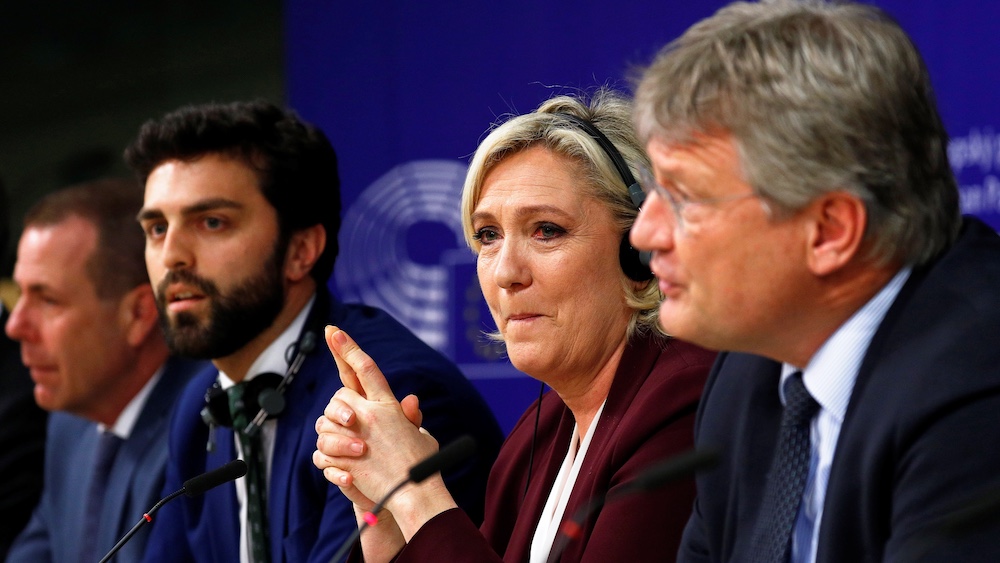 Ahead of last month’s European Parliament elections, Italian deputy prime minister Matteo Salvini announced he would be forming a pan-European alliance with France’s failed second-round presidential candidate Marine Le Pen in order to create a new far-right European group to disrupt the European Union from the inside.

There was just one problem. Le Pen and Salvini were already in such a European Parliament alliance: the Europe of Nations and Freedom (ENF) group.

On Thursday, Le Pen held a press conference in the European Parliament to announce that her project with Salvini had been a success. They had met the threshold to form a group in the Parliament—a total of at least 25 MEPs from at least seven different member states—and had decided to call their group “Identity and Democracy” (ID).

“We have changed the political chessboard of the EU,” Le Pen declared.

But as she described the group’s composition and goals, it became clear that it was virtually indiscernible from the ENF. The far-right euroskeptic parties in the group are mostly the same, with the addition of the Alternative für Deutschland (AfD), which has left the British Conservatives’ European Conservatives and Reformists (ECR) group to join the far-right.

The addition of the German AfD, combined with the huge increase of Salvini’s Lega seats (up from five to 29) nearly doubles the far-right group’s size. While ENF had 37 seats, the ID group will have 73. This gives them 10 percent of seats in this term, compared to 5 percent in the previous term.

But even though more seats means more resources and greater influence in parliamentary committees, ID will likely remain the smallest group in the European Parliament, coming two seats behind the Greens. And given the lack of difference from the ENF, it’s hard to see how its influence in the parliament is going to be any different. Moreover, its failure to woo members of the center-right European Peoples Party, notably Viktor Orbán’s Fidesz, will deny it the numerical heft that Salvini craves.

Both Le Pen and Salvini are themselves former MEPs, and they have had long experience with the parliament’s various far-right blocs over the years. Though much of the media has breathlessly portrayed their latest project as a new development that could destabilize the EU, the reality is that the presence of far-right groups goes back to 2007.

That group was called “Identity, Tradition, and Sovereignty”, but it didn’t last long. By the end of 2007 it had disbanded after Italian MEP Alessandra Mussolini (yes, the dictator’s granddaughter) made insulting remarks about Romanians on the parliament floor. MEPs from the irredentist Greater Romania party quit the group in protest, causing it to fall below the threshold needed to be an official group.

Such has been the history of the attempts to form a “nationalist international” in the European Parliament over the past decade. Through the years the far-right bloc continued to exist, though it was not officially recognized because it did not have enough MEPs. In these years Le Pen was teamed with Dutch far-right leader Geert Wilders, who is now in the political wilderness after having suffered a humiliating defeat in the Dutch European election.

The new ID MEPs, who will be led by Salvini’s foreign policy advisor Marco Zanni, were at pains at Thursday’s press conference to say that ID is not just a renamed ENF. No wonder, given ENF’s paltry record of achievements. Its members, especially Lega and Front National (which Le Pen has also renamed) MEPs, barely showed up to Brussels or Strasbourg, preferring to focus on national issues. Their record of cooperation is virtually non-existent, and they were so invisible in the last parliament term that many journalists forgot they existed.

Farage in the Wilderness

The stated aim of the group is to return power to EU national capitals, curb immigration, and prevent the spread of Islam in Europe. With such a platform it might seem a natural home for Nigel Farage’s Brexit Party, the successor to the UK Independence Party (UKIP) in Brussels.

But Farage has not had a good relationship with Le Pen in the past. After the 2014 election, she and Wilders tried to cajole Farage into taking his UKIP MEPs into a common Euroskeptic group with them, but they were rebuffed. The most important thing for UKIP has been to have a group in which Farage is the leader, so he can be given long speaking time at the top of the Parliament’s major debates and create clips for British news and his online fan base. Farage has also been wary of being associated with Le Pen, who is seen as an extremist by most people in the UK.

Farage has had his own group in the parliament since 2009, Europe of Freedom and Democracy. After the last European election in 2014, he and Le Pen were in a race to attract euroskeptic parties, and Farage won. Le Pen was unable to form a group until one year later in 2015, barely reaching the threshold.

This time around, it appears Le Pen has won. Though the ID group was briefly in talks with Farage to bring his Brexit Party MEPs into the fold, those talks went nowhere. Now, with time running out and Italy’s Five Star Movement (M5S) wary of continuing its unsuccessful alliance with Farage, it looks as if the EFD will cease to exist.

Zanni, who held the talks with Farage, said that the door remains open to the Brexit Party. “We were unable to create a united group for a number of reasons with the Brexit party,” he said. “It’s not a defeat; it’s a very open relationship; we are open to them if they want to cooperate.” He said they are also in talks with Spain’s new far-right party Vox, which has not yet chosen a group.

But it now seems even more unlikely than before that these far-right parties can cooperate with Farage. That’s because the UK’s Brexit chaos has scared Europe’s far-right parties away from the idea of their countries leaving the EU. Le Pen performed an about-face in 2017, changing her party’s position from wanting to leave the EU and the eurozone to wanting to stay in both. Lega and M5S also no longer advocate for Italexit, making the latter’s continued membership in Farage’s group rather untenable.

At their press conference, the ID MEPs were keen to stress that they are not a group that is against the EU’s existence. “Some people say that we want to destroy the EU, I want to contradict that,” said AfD MEP Jörg Meuthen. “The EU needs to be limited and reformed”.

The new names for these groups and parties will not change the reality that nationalist parties have difficulty working together. It is difficult to demonize foreigners and cooperate with them at the same time, as Alessandra Mussolini learned in 2007.

Indeed, it is a lesson her grandfather learned as well, always having to strike a balance between glorifying Italy and placating Hitler, who often spoke of Mediterranean peoples’ inferiority. This was one of the reasons that Franco never took Spain into the Axis—he distrusted international cooperation.

As the dust settles on the group formation process ahead of the first plenary sitting on July 1, what we are likely to see emerge is an enlarged far-right group that has benefitted from Brexit, picking up new members from two groups, Farage’s EFD and the British Conservatives’ ECR, which will likely no longer exist after the departure of UK MEPs.

But the ID group will probably still be the smallest, unable to block legislation. ID MEPs will probably still not show up. And the “far-right disruptor” that the media has been so preoccupied with over the next months will not materialize. At least, not in the context of the European Parliament.