Britain has descended into constitutional chaos as the Speaker blocks another vote on May’s twice-defeated deal. 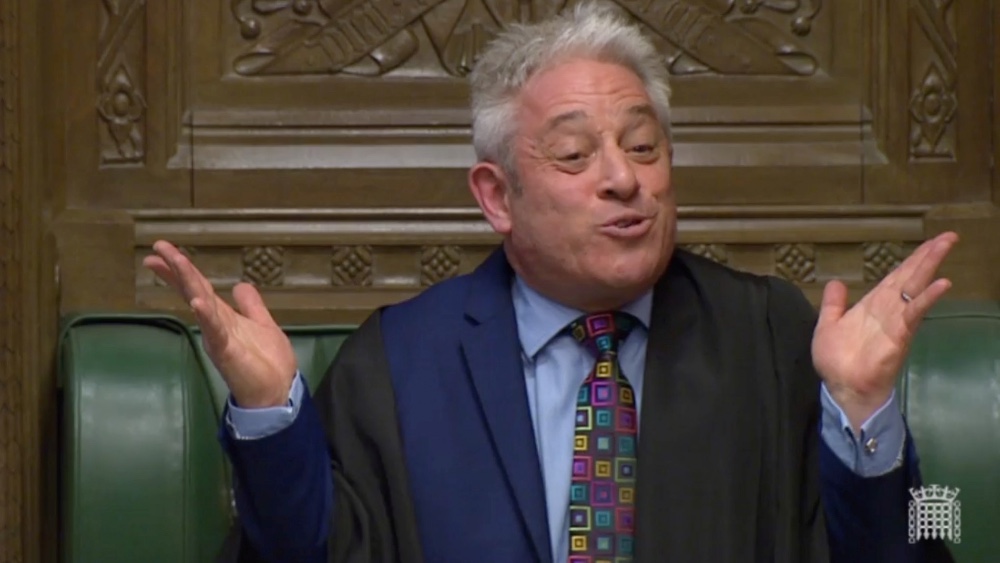 Who is writing the script for Brexit? Because this drama seems to have no end in sight. No sooner had we journalists written our pieces about what to expect this week than we had to consign them to the bin. The story moved from when would British Prime Minister Theresa May bring her twice rejected Brexit deal back to Parliament to wondering whether she could legally bring it back at all.

The latest twist in this never-ending saga centers around the Speaker of the House of Commons, John Bercow. He is in effect the chief official in Parliament and therefore oversees procedure. He also has a habit of causing political upset to one side of the House or the other. His latest ruling can only be described as a bombshell and draws on parliamentary convention dating back to 1604.

Unless the proposition for passing May’s twice-defeated Withdrawal Agreement is “substantially” changed, Bercow has said she cannot present it again to Parliament. So, all the talk about whether she may finally have won over the hardcore Brexiteers in her own party or even those awkward 10 Northern Irish DUP MPs who prop up her government in Westminster, appears to be irrelevant. No-one really knows what happens next. The United Kingdom may not have a written constitution, but there’s talk that it’s now in constitutional crisis.

On Thursday and Friday there’s another EU Summit of the leaders of the member states. Originally it was supposed to be a rubber-stamping exercise, a few days before the UK officially leaves the EU. Since last week we’ve known that Theresa May would be forced to ask for a delay to Brexit. That delay now looks endless as she and her team try to work out what on earth they do next.

In Parliament, John Bercow suggested a complete renegotiation at EU level would be needed in order to justify the government’s Brexit deal again being presented to Parliament. It had been assumed that clarifying the legal advice on the so-called Irish backstop would be enough to warrant another vote on May’s Withdrawal Agreement. Many Brexiteers are delighted with the Speaker’s latest ruling, believing that yet again a no-deal Brexit must be back on the table—even if Parliament ruled it out last week. Remember, until there’s a change in British law, the UK is still due to leave the EU next Friday.

All of this creates a major headache for Brussels. EU chiefs don’t want to see a chaotic, no-deal Brexit. But neither do they want to consider a complete renegotiation with London. They’ve always maintained that the Withdrawal Agreement cannot be reopened. They’ve also made it very clear that extending Article 50 of the Lisbon Treaty for no clear purpose is not something they can support. So, what will they do now? How can they maintain a united front for all 27 EU members when no one is quite sure what it is they are actually uniting around?

An Opening for a Softer Brexit?

Another significant problem is that a delay to Brexit of anything more than a couple of months will mean the UK is forced to take part in the European Elections which will be held in May. Those who see themselves as defending the EU project will not want a pro-Brexit populist party, probably fronted by Euroskeptic MEP, Nigel Farage, trying to hijack an election that’s already looking difficult to stage manage. None of this was part of the script.

There have been suggestions that the current Parliamentary session in Westminster could be cut short. But that would surely lead to another British general election. Perhaps instead, focus will now turn to the short document that accompanies the Withdrawal Agreement—namely the Political Declaration. This focuses on what type of future relationship the UK and EU will have post Brexit. Could a majority in Parliament agree to a softer Brexit—one that, say, keeps the UK in a Customs Union and perhaps even the Single Market. The very idea will be hated by Euroskeptics, but there are many MPs across the House of Commons who would prefer this to a hard Brexit.

Waiting for the Brexit Finale

No-one can really predict what happens next. Which reminds me of something that happened last Thursday night. Just after a majority of British lawmakers had voted to delay Brexit, I was at Berlin’s Mercedez Benz Arena watching one of my favorite bands play. The members of Florence and the Machine are proud South Londoners. But it quickly became apparent that they, like other British artists who find themselves touring Europe, are acutely embarrassed about what’s going on back home.

In front of more than 17,000 people, singer-song writer, Florence Welch, summed up the state of Brexit in three words. “It’s a mess!” she declared, before asking us all to hold hands to show that we were all united. As a Brit it was rather touching—if a little uncomfortable. But it just goes to show how much Brexit is dominating not just British life, but European life too.

At some point, this excruciating British drama will have to reach its climax. Despite all the extraordinary twists and turns, there’s still some way to go before we reach the finale.