With the European Parliament becoming ever more powerful, it’s important to understand how it functions and what impact it has on the lives of EU citizens. What can we expect from the elections? 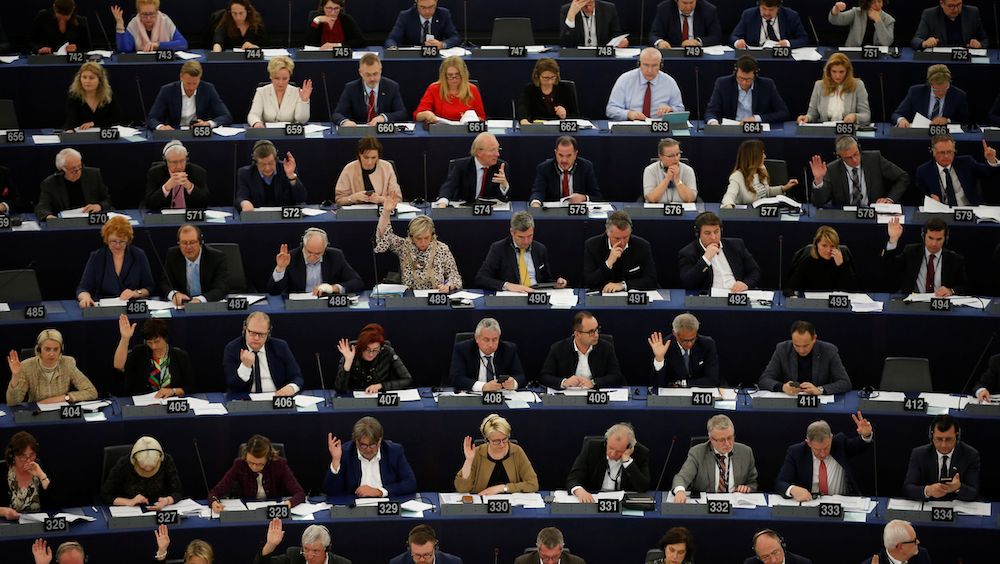 During the first months of its term, the new European Parliament will need to confirm the new president of the European Commission. According to the treaties, it is the heads of state and government who nominate the commission president—the most powerful position in the EU—and the parliament only gets to confirm or reject her or him. But in 2014, the European Parliament instituted the Spitzenkandidat (lead candidate) system and elected Jean-Claude Juncker as president of the European Commission.

2019 will show whether that system is here to stay, but a bit of background is needed to understand how it works (or why it might fail): the various national parties represented in the European Parliament organize themselves into political groups. They whip MEPs in votes just like in national parliaments. Each of these groups has fielded a Spitzenkandidat, and parliamentarians have vowed to make that choice stick: In theory, only a Spitzenkandidat who can command a majority in the parliament is supposed to become the next president.

If you listen to the EPP, the next president will almost certainly be their Spitzenkandidat, Manfred Weber of Germany, since they are projected to come first in the election. The EPP is also currently the largest group in the parliament, with almost a third of the seats. It is a broad tent that includes liberal parties like Finland’s NCP, centrist parties like the German CDU/CSU, and right-wing parties like Viktor Orbán’s Fidesz of Hungary, which is currently suspended as part of the civil war between the right and left flanks that is wracking the party.

Other groups in the Parliament, however, have soured on the Spitzenkandidat process and are unlikely to anoint Weber simply because the EPP comes first. He needs to command a majority, which the EPP will not have on its own. The center-left Socialists & Democrats, presently the second largest group with a quarter of seats, have fielded Commission Vice-President Frans Timmermans from the Netherlands as Spitzenkandidat and may not be willing to support Weber.

The process is also meeting headwinds from national leaders, particularly from French President Emmanuel Macron, who says it is the right of the European Council to appoint the commission president. So the council may choose to disregard the Spitzenkandidat system altogether and appoint someone who was not a candidate, such as Frenchman Michel Barnier, who distinguished himself during the Brexit negotiations.

Margrethe Vestager, the high-profile competition commissioner from Denmark, could be a choice that satisfies both the parliament and the council, since she has somehow managed to run as a Spitzenkandidat for the third-largest group, the liberal family of ALDE, without endorsing the system.

In contrast to national parliaments, the European Parliament is not allowed to draw up legislative proposals of its own—that’s the privilege of the European Commission, which therefore tends to set the agenda. But European laws need to be approved by both the parliament and the council, which is made up of ministers from each national government.

The parliament tends to be more ambitious and strengthen commission proposals, while the council is more conservative, watering down proposals more often than not. National governments complain that the European Parliament adds unrealistic amendments to legislation because MEPs aren’t the ones who have to implement the laws—that will fall to the national governments represented in the council.

MEPs also have a say about spending. While the outgoing Commission makes a proposal for the EU’s upcoming seven-year budget, and the member-states must reach unanimity in the council, the Parliament must give its final consent. As usual, the current parliament has asked for higher spending than the Commission has proposed for the 2021-27 budget round, particularly in areas related to climate protection.

In the coming term, the new parliament may take up Macron’s ideas for reforming the eurozone’s financial rules. MEPs will need to take up recent proposals to establish a European Defense Union and a beefed-up defense capability that is more independent of the United States. With political pressure mounting over the migration issue, MEPs may also take up a proposal to change the EU’s border policies.

With EU-US trade talks having resumed in April, the parliament will likely also need to vote on whether to approve such a deal. The result is anything but certain, because MEPs passed a resolution last year saying the EU should not sign free trade deals with countries not party to the Paris Climate Agreement.

During the 2014-19 term, the parliament voted on almost 1,000 legislative proposals from the Juncker Commission. On a macro level, the big issues MEPs grappled with over were navigating a way out of the economic slump, handling the migration crisis, and reacting to Brexit.

But the more important achievements came in individual pieces of legislation. MEPs voted on a new set of privacy laws, and just before the end of the term they approved a controversial reform of the EU’s copyright rules—a law some have labeled the “meme ban.”  The parliament also held a hearing with Mark Zuckerberg to demand answers about what data Facebook is collecting on its users and how it handles political advertising.

One of the decisions that has had the biggest immediate impact on EU citizens was the 2015 vote to end mobile phone roaming charges within the EU in 2017. The parliament also voted to end card payment fees in the EU. Furthermore, it enacted a number of climate laws, including new CO2 reduction targets for 2030, car emission reduction requirements, and requirements for energy efficiency and renewables. It also cracked down on plastic carrier bags and other single-use plastics.

Polls predict a sizeable rise of far-right populist parties in the new parliament—parties who will certainly try to use their clout to hinder European legislation. To be effective, they need to organize in political groups, but given the many competing agendas, that may prove difficult.

In the old parliament, the European Conservatives and Reformists (ECR) group were the largest group of the right-wing. It was formed by then British Prime Minister David Cameron in 2009, when he took his Conservative Party out of the EPP and instead got into an alliance with Poland’s right-wing Law and Justice (PiS) and the Czech Civic Democrats (ODS).

It has been unclear what will happen to this group in the next term. If Brexit goes ahead before May 23, ECR would be dominated by the Poles, or it could take on like-minded allies like Fidesz and Italy’s Lega. However, the two party leaders, Orbán and Matteo Salvini, seem keen to form new groups that revolve around them. But even if the United Kingdom takes part in the election, it’s unclear whether the British Conservatives would want to disrupt the group formation process by continuing to be part of the ECR.

The other current groups on the far right are Europe of Freedom and Direct Democracy (EFDD) and Europe of Nations and Freedom (ENF), which hold 5 percent of seats each. Former UKIP and now Brexit Party leader Nigel Farage heads the EFDD, and the group was long dominated by UKIP. This changed in 2014 when they admitted the Italian Five Star Movement (M5S), with both parties having a roughly equal number of MEPs.

However, UKIP and M5S have had a tumultuous relationship, and it is unlikely they would sit together again in the next term. UKIP has since almost collapsed and about half of its MEPs have quit the party, including Farage (though he has remained as leader of the EFDD).

Speculating about UKIP and Farage brings us nicely to a short and particularly thorny question about the European elections: Will the United Kingdom take part? Prime Minister Theresa May certainly has an incentive to try and push through a deal before May 23—having to take part in the elections will deepen the splits within her Conservatives. What’s more, given her performance on Brexit over the past several months, the party is likely to take a beating in the elections.

For the time being, the specter of Brexit continues to loom over the parliament, and because of the latest extension it’s not even clear how many MEPs there will be after the election. The number and distribution of MEPs had been changed in anticipation of the UK departing, but now that will have to be shelved. And not to forget: MEPs will have to approve any final Brexit deal.

With or without Britain, one thing is not going to change for the new European Parliament: MEPs will continue to split their time between the French city of Strasbourg and Brussels.

The treaties stipulate that the parliament’s seat is in Strasbourg, but in 1985 MEPs unilaterally built themselves a new home in Brussels in order to be with the other two EU institutions and not be shut out of decision-making. France took the parliament to court, and a compromise was reached, whereby MEPs must spend one week a month in Strasbourg.

Recently, CDU leader Annegret Kramp-Karrenbauer, possibly the next German chancellor, dared to suggest dropping Strasbourg. Most national governments would probably be happy to agree—but certainly not France, champion of the city of Strasbourg and its flourishing hotel and restaurant trade. And as changing the seat of the parliament would need a change to the European treaties, unanimity is required.

In other words, the “traveling circus” will continue, and new MEPs had better get used to that quickly.