In a desperate bid to win back voters, Germany’s SPD is shifting to the left. It may be the party’s last chance to turn its fortunes around in a changing political landscape. 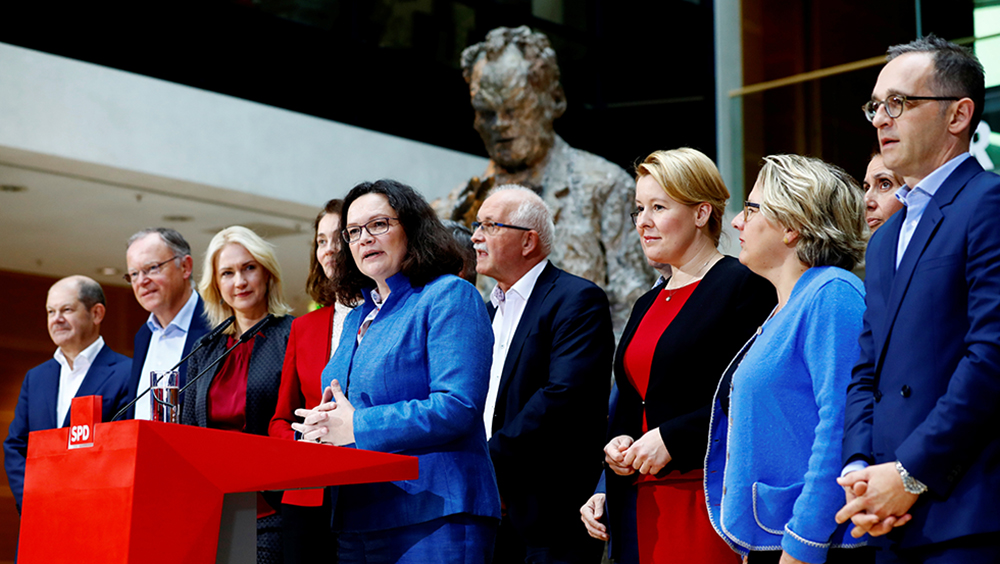 Germany’s troubled Social Democratic Party is rediscovering its roots. With promises of higher wages, pensions, and social benefits, the SPD is trying to woo back working-class voters. “Solidarity, social cohesion, and humanity—those are the principles on which we are building a new social state,” said party chairwoman Andrea Nahles in February after a two-day leadership retreat.

The SPD’s populist turn to the left marks the end of the consensus politics that has shaped the country’s political, economic, and social landscape for decades. While it does not immediately endanger the coalition with Angela Merkel’s conservative bloc, the SPD has made it clear that from now on, political identity counts more than remaining in power.

“We have positioned ourselves clearly,” Nahles said. “If others want to rub up against that—then that’s politics. We actually need more of that.”

2019 brings a series of difficult electoral challenges for the Social Democrats. Over the past 20 years, they have tumbled from 40.9 percent of the votes in the 1998 federal elections to 15 percent in recent polls. In addition to the European Parliament elections in May, four state elections are scheduled for this year.

With its new program “A New Social State for a New Era,” the SPD promises to raise the minimum wage from €9.19 to €12 per hour and introduce the right to work from home. Families with children are to receive far more generous benefits, particularly if they depend on social aid. At the same time, older employees would be entitled to receive full unemployment benefits for a much longer time. In addition, the SPD wants to introduce a minimum pension of €900 per month for employees who have put in more than 35 years of work.

According to opinion polls, the SPD may be hitting the right nerve. Two-thirds of voters say they would back at least some of the proposals, particularly those on the minimum wage and pensions.

For the SPD’s coalition partner, however, the “New Social State” consists mostly of no-gos. Annegret Kramp-Karrenbauer, the new leader of the Christian Democratic Union (CDU), has been trying to sharpen her profile as a conservative on issues ranging from conscription to migration. Giving way to the SPD on social benefits would not help her cause. Her predecessor Angela Merkel, the most pragmatic and centrist leader the CDU has ever had, has said little in public about the new SPD program. But it is clear that even she will find the new ideological divide difficult to bridge.

Germany’s conservatives want to spend more money on defense while cutting the solidarity surtax that was introduced nearly 30 years ago to pay for the cost of German reunification. The SPD, faced with the prospect that its new social policy proposals could cost more than €40 billion a year, says it’s a question of rethinking the government’s priorities—and possibly of raising taxes for the wealthy.

In a highly symbolic move, the SPD also renounced the painful labor market and social benefit reforms that Gerhard Schröder, the last SPD politician to make it to the chancellery, introduced in 2003.

The most contentious of these reforms is “Hartz IV,” named after Volkswagen’s former labor director Peter Hartz. As one of Schröder’s close advisors, Hartz drew up the proposals to limit unemployment benefits and introduce sanctions for long-term unemployed people not making enough of an effort to find a job.

Unanimously and with obvious relief, the SPD leadership recently decided to abolish the “Hartz IV” regulation, replacing it with a “citizen’s income” that would be paid out for much longer and with far fewer sanctions. “We are leaving Hartz IV behind, and not just in name,” Nahles declared at the close of a retreat where she received unanimous support for her new program.

It’s safe to say that Andrea Nahles must have felt vindicated. In Schröder’s time, she was one of the most prominent voices of the SPD’s left and a sharp critic of his reforms, fearing they would end up splitting the party and alienating many of its voters.

As it happens, she was right: Schröder’s “Agenda 2010” package of liberal reforms caused thousands of trade unionists and SPD traditionalists to leave the party and join the newly-founded Left Party, which developed into a dangerous competitor. But even for those who stayed, Hartz IV continued to be tremendously divisive. That, in turn, has been a major factor in the steep decline of the party’s vote share since the millennium.

While the program damaged the SPD, it benefited the country. Economists widely agree that Agenda 2010 was central to restoring Germany’s competitiveness and growth. Certainly, Germany would not be the leading European economy today without the market-oriented reforms that Schröder pushed through.

Ironically, it was Merkel who benefited the most: becoming chancellor in 2005, voters gave her credit for the prospering economy. Being able to outshine her junior coalition partners won her four terms in office, while the SPD, in government for three of those terms, went into an accelerating decline. Today, Merkel’s conservative bloc is still the most popular party in Germany by far, while the SPD has been overtaken by the Greens.

The decline has pushed the SPD into a series of leadership struggles. Every turnover at the top kindled great enthusiasm and hope, only to be followed by deeper disappointment and worse elections results. Nahles hasn’t even been in the job for a year, but she is already feeling the heat, with old-time foes like Gerhard Schröder and Sigmar Gabriel, former SPD chairman and foreign minister, leading the attacks.

The initial success of the “New Social State” and the party’s huge relief over getting rid of Hartz IV mean that Nahles has won time for a breather. But much depends on how the SPD’s new identity drive plays with voters.

The initial reaction seems to be positive. According to a recent ARD Deutschlandtrend poll, most Germans like the fact that both Social Democrats and Christian Democrats are sharpening their profiles. Three out of four Germans said they believed it was getting easier to tell the parties apart and that they approved of this development.

Beyond the polling data, however, there are real elections looming. The first important landmark is the Bremen state election that coincides with the European Parliament elections on May 26. It’s significant because Bremen—Germany’s smallest state with 650,000 inhabitants—is an old industrial center with a large share of traditional blue-collar workers. In the 1970s, it was hit hard by the shipyard crisis, and even today, unemployment is higher than in any other German state. At 9.8 percent, joblessness in Bremen is three times as high as in Bavaria.

Given the city’s working-class background, the SPD has won every single state election in Bremen since the founding of the Federal Republic in 1949. This time around, however, the party is faced with a double handicap. Apart from the negative trend at the federal level, local SPD incumbent Carsten Sieling is as uncharismatic as they come.

Adding insult to injury, he appears to be unlucky. Recently, Sieling bought the first tickets in a public raffle—a traditional task for Bremen’s mayor. The first was a blank; so was the second. On his third try, Sieling won a glass of jam. “I hope this is not a bad omen for the state elections,” the moderator of the event commented.

Polls have given the opposition Christian Democrats a tiny lead on the SPD in Bremen, but the race is far from being decided. Both friends and foes of Nahles will watch closely to gauge the impact of the “New Social State” on estranged traditional voters.

In terms of numbers, the state elections in Saxony, Brandenburg, and Thuringia in the fall are much more important than tiny Bremen. Yet in Saxony and Thuringia, in particular, the Social Democrats were never really able to take root after German reunification. For many years, the Left Party—a descendant of the former ruling communist party—was very strong here; in recent years, this is where the far-right populist Alternative für Deutschland (AfD) has bagged its biggest gains.

Can the SPD, with its new promises of more money and more respect, win back the hearts of disenchanted eastern voters? Whether it is a “yes” or “no” answer that emerges from the elections in the fall, Germany’s political landscape is likely to change irrevocably.

If Nahles’ “New Social State” can bring back the votes, the SPD will look to do more of the same, i.e. populist programs for more fairness, solidarity, and equality—programs that will have to paid for by taxpayers (“soaking the rich” won’t be enough), business, and through higher debt.

The gap between Christian and Social Democrats will widen. That won’t necessarily mean an early end to Merkel’s last government, but it would make it difficult to agree on initiatives outside the existing coalition agreement. It’s also entirely possible that the SPD, if it believes that its new program works, could use the agreed midterm evaluation to leave the government. The Greens and the Left would become its natural allies.

While such a development would bring a lot of uncertainty, the alternative is worse. If the SPD’s decline continues with this year’s elections, despair will make the party extremely unstable. With a renewed leadership struggle added to ideological rifts, the SPD could even disintegrate altogether.

Among Germans, the country’s oldest political party is affectionately known as “good old auntie SPD.” But a political institution that once seemed as solid and dependable as the four-stroke engine of a Volkswagen beetle may now be reaching the end of the road.