Germany needs to take the twin threats of Russia and China more seriously, argues Republican Senator TOM COTTON, a member of the US Senate Committees on Armed Services and on Intelligence. 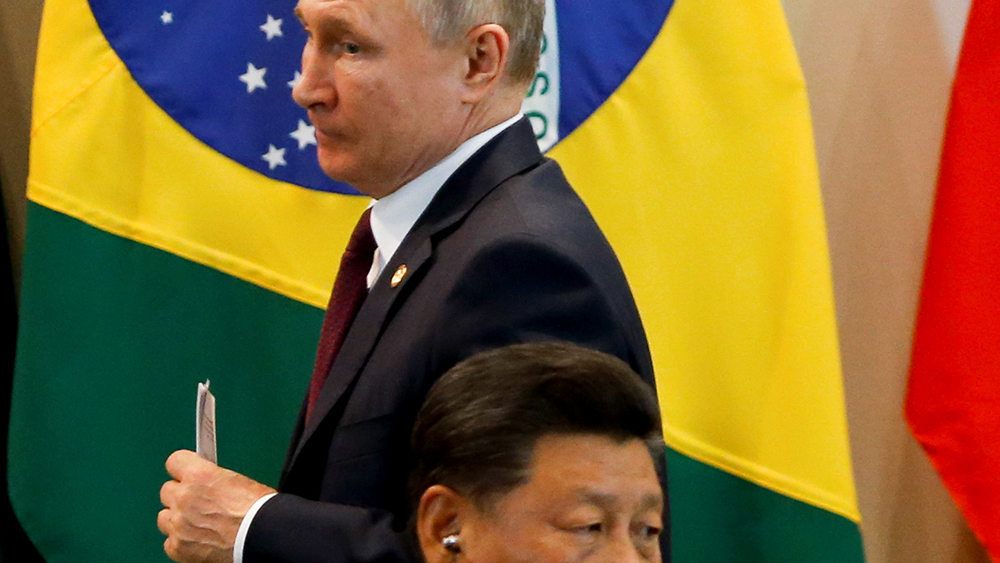 Senator, how did American foreign politics change under President Donald Trump? One very significant change is this administration’s attitude toward China. There has been a generation-long, bipartisan tradition among American presidents of being tough on China while running for office, but not following through once elected. The president campaigned on China’s abuses with respect to trade and other issues, and he is governing accordingly. What might not be apparent to Europeans is just how much popular support this tough approach to China commands in America. When we aren’t in moments of crisis or fighting wars, foreign policy doesn’t generally dominate the American political discussion. But China is an exception. In my home state of Arkansas, people see the harmful effects that unfair Chinese competition has had on their neighbors and communities, and like all Americans they have a sense of justice and fair play that is offended by the abuses in Hong Kong, or in Xinjiang where the Chinese Communist Party has built concentration camps. So that genie is out of the bottle. It won’t be put back anytime soon, even if there’s a US-China trade deal.

There is an impression that the United States under Donald Trump is taking a step back from world politics while placing a stronger focus on domestic affairs. What is your view? I don’t accept this premise—and remember, Barack Obama campaigned and tried to govern on the notion that it was time to engage in nation building at home. His attempt to pull back from the world, and his largely rhetorical “pivot to Asia,” which wasn’t sufficiently backed up by military assets, contributed to the chaos beginning in 2014 and 2015, whether it was ISIS and the refugee crisis, China bullying its neighbors in the South and East China Seas, or Russia invading Crimea. America remains committed to NATO and committed to its allies in the Middle East and Asia-Pacific. The threats to NATO are China and Russia, as well as other NATO members that don’t take China and Russia seriously as adversaries.

What do you think of German Defense Minister Annegret Kramp-Karrenbauer’s suggestion of creating a safe zone in Syria? I’d welcome increased German involvement in northeast Syria. It is imperative that we coordinate to stamp out the last remnants of ISIS. As part of this process, we must ensure that ISIS detainees are returned home and detained. Additionally, we should cooperate to halt further Iranian expansion in the region and protect the Kurds from being overrun, even if they don’t receive an autonomous zone in northeast Syria.

The global order is changing. Right now, there are two main beneficiaries: China on the one hand, Russia on the other. Does the US accept this development and if not, how does it counteract it? Russia and especially China are very serious threats to countries like the United States and Germany. Analysts typically speak of Russia as an economically challenged and, literally, demographically dying nation, and China as the real threat for our future. There’s something to be said for that, but what we should keep in mind is that Xi Jinping and his cronies act as much out of desperation as does Russia’s leadership. As Xenophon taught ages ago, tyrants everywhere and always rest uneasily. Government without the consent of the people is an inherently fragile situation.
One thing we must keep in mind is that dictators like Putin and Xi want to split apart allies like the United States and Germany. The greatest threat to NATO today is the failure or refusal of some members to take seriously the malign intentions of these two men and their policies. Take Huawei, which some NATO members like Germany may allow in their 5G infrastructure, despite its track record of espionage for China. Or take Nord Stream 2, which is, frankly, an appalling and shameful project. While Germany touts the pipeline’s commercial benefits, Putin will use it as a strategic tool to split Eastern Europe from Central and Western Europe. It would effectively double the amount of natural gas Russia could export to Europe along a route that bypasses the alliance’s eastern frontier. This would enhance Russia’s ability to blackmail countries like Poland and the Baltic states by threatening their energy supplies, while deepening NATO members’ reliance on Russia to heat their homes and power their economies. Russia’s use of oil and gas exports to pressure Ukraine is a preview of how it could use Nord Stream 2 against NATO. And remember that when Putin invaded Crimea, he threatened to cut off European countries that assisted Ukraine. If NATO members increase their reliance on Russian gas, it will give the Kremlin more opportunities for blackmail and more leverage over the alliance.

Are you satisfied with the contribution of Germany and the European Union to the international security architecture? What do you expect the Europeans and especially Germany to do in terms of security and foreign policy? I appreciate Germany’s recommitment last month to increasing its defense budget to levels agreed upon by NATO leaders. Given the common threats we face, it’s urgent that all NATO members meet their defense spending commitments. NATO may struggle to remain a credible military force if all but seven NATO members refuse to spend sufficiently on their militaries. Additionally, I support European initiatives to streamline the defense acquisition process for our European allies. However, as these initiatives develop, it’s critical that they be designed in a manner that doesn’t duplicate NATO functions or impact NATO interoperability.

Germany has not ruled out incorporating Huawei in its 5G mobile networks. Would Huawei’s participation limit the intelligence sharing between Germany and the US? I’m deeply concerned about the German government’s proposal to include Huawei in the country’s 5G infrastructure. Huawei is an intelligence-gathering arm of the Chinese Communist Party. China’s neighbors in the Asia-Pacific region—Australia, Japan, and New Zealand—have already banned Huawei from their 5G networks. The United States has gone further by placing the company on our trading blacklist. Some NATO allies have also acted to counter the Huawei threat, including Poland and Estonia.
Huawei technology may be favored by the German business community because it is relatively inexpensive, but at what cost? Huawei networks present a risk to German security that can’t be mitigated. It could enable the CCP to spy on the German government and invade the privacy of German citizens. I’d urge the German government to look at more secure 5G providers such as European firms Nokia and Ericsson.
The adoption of Huawei technology by some allies could split NATO into Huawei and non-Huawei blocs, harming our ability to cooperate and thus helping our adversaries. Unfortunately, the presence of Huawei in allied nations’ networks will force the US government to review our intelligence-sharing procedures.

President Trump stated that the EU and Germany are among America’s “foes.” Do you agree with that, also considering the recent 30th anniversary of the fall of the Berlin wall? The United States, Germany, and the EU are never going to agree about everything, including trade, which is the context of the remarks you’re referring to. We’ll have disputes. Our relations will be better under some leaders than others. But important anniversaries like the fall of the Berlin Wall, and threats like China and Russia, remind us that we’re united by common interests much stronger than any supposed divisions.

Could it be already too late for the US to effectively limit China’s expansion in the world? The Chinese Communist Party poses a threat not just to the United States, but to the entire free world. China is run by a totalitarian regime that doesn’t tolerate dissent, at home or abroad. It’s easy to dismiss the Communist Party’s concentration camps in Xinjiang as a “far-off” problem. But the CCP’s malign activities are already at our doorsteps. Beijing is already using predatory economic tactics and censorship to steal from our companies and stifle our citizens’ ability to speak out against it.
Americans and Germans know the evils of totalitarianism, so we must mount a firm, unified response to these threats from Beijing. The US and Germany have many allies and friends, so I’m confident in our ability to confront this challenge.

How would you evaluate the current relationship between the United States and Russia? As I’ve long said about Vladimir Putin: once KGB, always KGB. I expect that the United States and Russia will remain adversaries as long as he remains in power. It would be good if we had a better bilateral relationship, but that may not occur anytime soon—particularly given Russia’s continued aggression against the NATO alliance, as well as its meddling in Ukraine, Syria, Venezuela, and elsewhere.

Do you fear any reoccurring Russian interference in the 2020 US presidential elections, and how do you plan on confronting the issue? I don’t fear anything to do with Vladimir Putin or his efforts to keep Russia relevant. His actions deserve a firm response, not fear. I sit on the Senate Select Committee on Intelligence, and Russia’s malign activities on this front are something we track closely, and for which the United States is well prepared. But it’s also important to remember that Russian interference was not a decisive factor in recent US elections. The American people decide their own future, and we’ll do everything in our power to ensure that remains true.

Former national security adviser of president Trump, H.R. McMaster, and economic advisor Gary Cohn stated in a 2017 op-ed that nations should prioritize their own interests over global alliances. Does this statement still resonate with you today? Alliances must be dedicated to some purpose—they are instruments to strategic ends, and so they are critical elements in any nation’s pursuit of its own interests. I look at the world today and I have no doubt about the purposes to which NATO, for example, remains dedicated.

In your view, what are the most important topics for the Munich Security Conference 2020 and what do you expect from it in order to be a successful conference? The most important topics for the 2020 Munich Security Conference are the nefarious intentions of our adversaries, Russia and China. Russia continues to bully, intimidate, and occupy its neighbors. Meanwhile, China seeks to build an international system antithetical to constitutional government, the rule of law, and market-based economics. Despite these threats, some allies continue to strike dangerous deals with China and Russia that risk betraying their safety and the safety of their allies. Conference attendees should discuss how we can prevent our transatlantic alliance from being infiltrated and divided by these hostile powers. How we respond to the threats posed by Nord Stream 2 and Huawei will be critical.