A long-anticipated split in the center-right EPP group now seems imminent as the hard-right Hungarian prime minister launches an attack on the European Commission president. 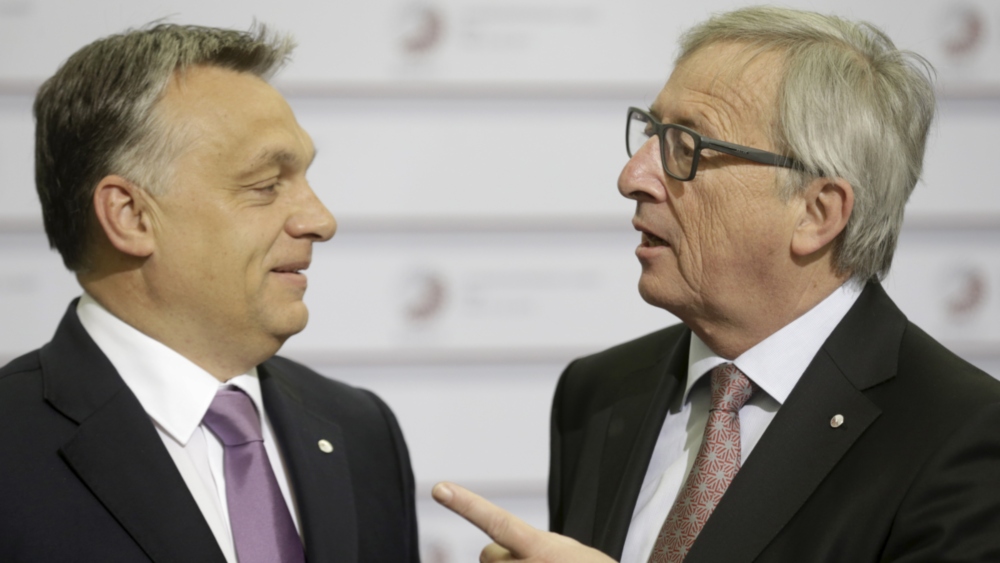 For months, Hungarian Prime Minister Viktor Orbán has been walking right up to the line of seceding from his center-right EU political group, the European Peoples Party (EPP). This week, he made an unprecedented attack on EPP group leaders, seeming to openly dare them to expel him.

The government’s official Facebook page shared an image of Juncker and Hungarian-American businessman George Soros saying, “you have the right to know what Brussels is preparing for!”. It accused Juncker of threatening Hungary’s security.

“They want to introduce mandatory resettlement quotas,” the post said. “They want to weaken member states’ rights to border protection. They would ease immigration with migrant visas”.

Juncker, who is a member of the same EPP group as Orbán, hit back the following day at a public event in Stuttgart. “Against lies there’s not much you can do,” he said. “There is no overlap at all between Orbán and myself…I believe his place is not in the European People’s Party.” Key EPP members in Berlin also turned up the pressure on the self-styled “illiberal democrat” from Budapest: CDU party leader Annegret-Kramp Karrenbauer said “it is up to the Hungarian side to prove it still feels a part of the EPP”, while CSU leader Markus Söder said Orbán was “going in the wrong direction”.

Back in Brussels, Joseph Daul, the EPP’s president, released a series of tweets defending Juncker and decrying the Hungarian government’s campaign. “Instead of casting Brussels as a ghost enemy, Hungary must realize it is a part of it.” However, he stopped short of calling for Orbán to be kicked out of the group.

But EPP insiders say Budapest’s new campaign could be the last straw in the long-simmering tensions within the EPP–because the party’s highest-profile leader in Brussels is now openly calling for Fidesz to be kicked out.

Such a split would have huge implications for the upcoming European Parliament elections in May. The EPP has been at pains to avoid a fracture for fear that Orbán will start a new hard-right political group to rival the EPP, jeopardizing its strong majority in the Parliament and the European Council of the 28 national governments.

Such a hard-right group could lure other EPP parties, as well as current members of the Eurosceptic European Conservatives and Reformists (ECR) group such as Poland’s Law and Justice party. The ECR, set up by the British Conservatives in 2009, seems likely to disband after Brexit. Italy’s Lega Nord and Five Star Movement, as well as far-right parties like France’s Rassemblement National, could also be tempted to join Orbán’s new group.

Such a realignment could create the most powerful far-right movement in Europe since World War II.

Orbán is angry because the EU has opened infringement proceedings against his government for rule-of-law violations.  He stands accused of having dismantled democratic institutions and freedom of the press in the country since his party took an unprecedented two-thirds majority in the Hungarian parliament in 2010. Here the Hungarian has something in common with Poland’s government, which is also facing EU investigations.

Following the European Parliament’s vote to open infringement proceedings, all eyes were on Orbán to see if we would leave the EPP, which until that time had protected him from EU scrutiny. However, Orbán chose to remain in the group at that time, though his continued presence caused tensions at the EPP party congress in November.

European election hangs in the balance

All of this will have clear implications for who becomes Juncker’s successor following the end of his term in the Autumn. The European political groups intend to once again turn to the spitzenkandidat (lead candidate) process, which was used for the first time in 2014 to elect Juncker. Under the system, each group nominates a lead candidate, and the candidate that can secure the most votes in the new European Parliament, which will take its seat in July, will become Commission President.

However, national governments are not keen on the idea, having only sleep-walked into it in 2014. There is intense doubt about whether one of the six lead candidates will actually become the next Commission President, even though the European Parliament has vowed that it will not approve anyone other than them. Instead, the governments are expected to nominate their own person and pressure the parliament to accept him or her.

In 2014, there was intense pressure on national leaders to accept Juncker, the spitzenkandidat for the EPP, as the president. The EPP had clearly won the European election, obtaining far more seats than the other parties. But though the EPP is again projected to ‘win’ the elections this year, it will likely be by a far lower margin. Losing Orbán and perhaps others would push them even lower, jeopardizing the chances of this year’s EPP spitzenkandidat, Manfred Weber, being approved by the Parliament and Council. A majority vote in both institutions is necessary to become president.

With the Liberal ALDE group gaining traction, in part thanks to the prospect of a partnership with French President Emmanuel Macron’s En Marche party, there is an increasing possibility of the EPP failing to come first in this year’s election. The Orbán decision may determine ALDE’s fate. Even though his Fidesz party does not have many MEPs, Orbán could bring other defecting EPP parties with him.

Juncker is well aware that Orbán was one of only two prime ministers to vote against him in 2014 – the other being Britain’s David Cameron. Orbán is now focusing his ire on Weber, his one-time defender turned critic. Weber came out strongly against Orbán on Friday, saying “I find some of the wording unacceptable. One cannot belong to the EPP and campaign against the current EPP Commission president.”

The task of keeping the EPP together will now fall on the party’s spitzenkandidat, and he must make a choice. Either Weber will heed the advice of Juncker and expel Fidesz from the group, or he will avoid the risk and try to placate Orbán over the next three months, postponing a decision about his party’s future until after the election. He will need to make a decision soon.